According to international trade data reported by the U.S. Census Bureau, the United States' overall trade deficit with the rest of the world shrank to its lowest level in three years in November 2019:

The report showed the deficit decreased in November, the most recent month for which the government has figures, by $3.9 billion -- a decline of 8.2 percent....

The analysis said the lion's share of the shrinking trade deficit resulted from a reduction in the gap with China -- which decreased $2.2 billion to $25.6 billion in November. Imports from China decreased by $800 million.

That's all this particular article had to say on the topic, but it misses a much bigger story. In addition to the decrease in the goods the U.S. imports from China, U.S. exports to China spiked up in November 2019, fueled by China's suppressed appetite for U.S.-grown soybeans and its undiminished appetite for pork, with China turning to global markets to address the impact of African Swine Fever on its domestic hog population, which has created a massive shortage of the popular protein within the country.

You can see both factors at work on the right-hand side of the following chart, which tracks the year-over-year exchange rate-adjusted growth rate of goods traded between the U.S. and China from January 1986 through November 2019: 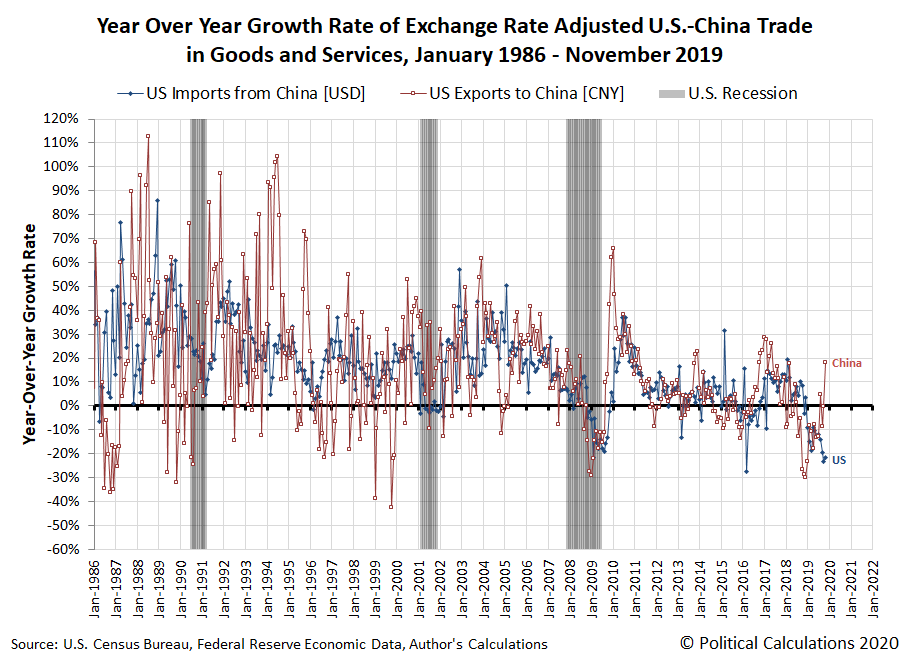 Most of that year-over-year effect for the spike in U.S. exports to China in November 2019 relies upon the very low level of U.S. exports of soybeans back in November 2018, when Chinese buyers were persuaded by China's retaliatory tariffs to effectively boycott purchases of the U.S. crop - a boycott that cracked in November 2019 when China began to waive its punitive tariffs in anticipation of a trade deal with the U.S. government. At the same time, the U.S. government had not yet fully implemented its tariffs on Chinese exports to the U.S., so the volume of those goods remained high through the end of 2018. A year later, with U.S. tariffs now fully applied, Chinese exports to the U.S. have fallen sharply because they are now costing U.S. businesses and consumers much more than a year ago.

In any case, that's a more complete version of what happened during November 2019 that led to the lowest monthly trade deficit of the last three years being recorded in the U.S.