Statistically speaking, the S&P 500 (Index: SPX) got pretty interesting yesterday, where we define "interesting" as any change in the level of the S&P 500 of 2% or more.

That's not as rare as you might think, because on average, the market has seen drops like that on average every 132-133 days. Except, when volatility in the market cranks up to levels like that, big changes in the level of the S&P 500 are not evenly distributed over time, but instead tend to be clustered close to each other when they occur. The following chart shows all the daily percentage changes in the S&P 500 and its predecessor indices from 3 January 1950 through 24 February 2020, where the biggest changes fall outside the red-dashed lines, which represent daily percentage changes that are more than three standard deviations away from the mean trend for the index. 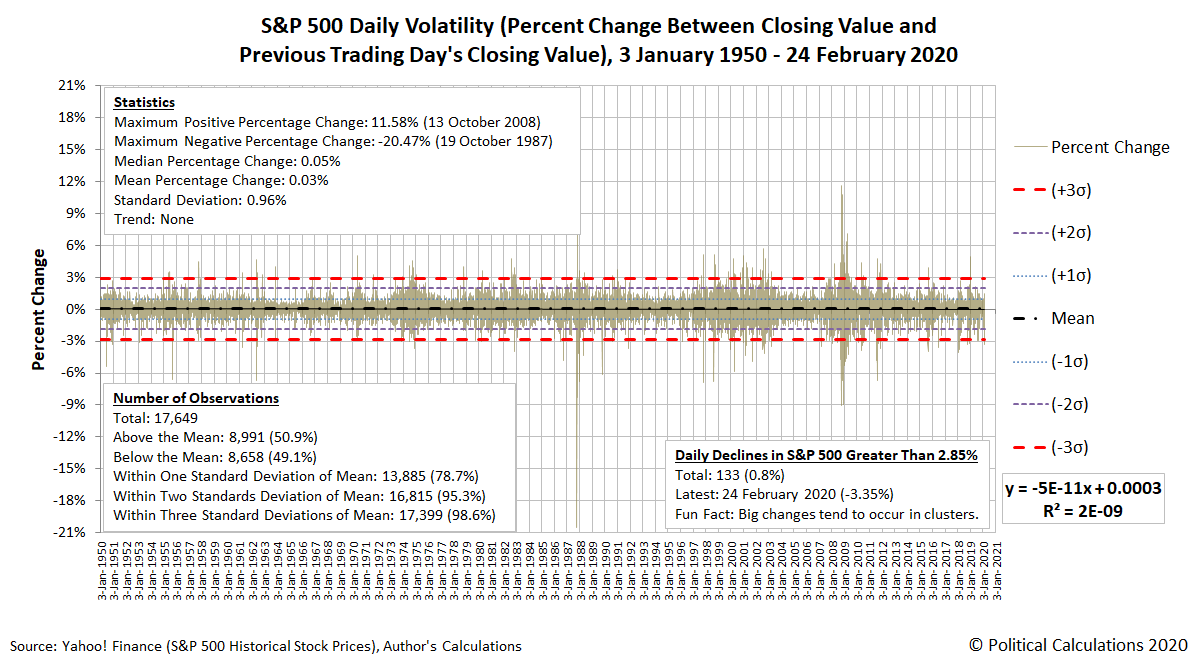 Looking at the level of the S&P 500 itself, the change that took place on 24 February 2020 wasn't all that surprising. To help make that point, we've animated the following chart showing the forecast from the dividend futures-based model we use to project the future trajectory of the S&P 500 that we presented long before the market opened on Monday to what it looks one trading day later. If you're accessing this article on a site that republishes our RSS news feed, please click through to our site to access a working version of the animated chart.

The heavy black line representing the actual trajectory of the S&P 500 is closely paralleling the orange-dashed line representing the trajectory the dividend futures-based model indicates would apply if investors are closely focusing on 2020-Q4 in setting current day stock prices. You'll also note a big change in the future forecast about 30 days from now, which is an echo of the volatility event that just took place. This echo is an artifact of our use of historic stock prices in projecting future stock prices, where the important thing to know right now is that it will be in flux until things settle down.

As for what to pay attention to in the days ahead, the big question now is not whether the Federal Reserve will be cutting short term interest rates in the U.S. in 2020, but how many times it will in 2020. At the end of the last week, investors were betting on two rate cuts, but as investors respond to growing indications of massive supply chain disruptions resulting from China's coronavirus epidemic, the odds are increasing there will be a third. We've animated the probabilities recorded by the CME Group's FedWatch tool for what the Fed will do with the Federal Funds Rate at upcoming meetings of its Federal Open Market Committee to show how it has changed from what we presented yesterday:

To summarize what the FedWatch tool is indicating, investors are by betting the Fed will be forced to implement quarter point rate cuts in both 2020-Q2 and 2020-Q3, and the odds of a third rate cut in 2020-Q4 have risen.

That uncertainty for 2020-Q4 accounts for why the alternative futures spaghetti forecast chart is indicating investors are remaining mostly focused on 2020-Q4 at this time. However, if more bad news erupts to cause investors to shift their forward-looking focus earlier in the year, particularly to 2020-Q2, such a change in focus would likely be accompanied by a much larger drop in stock prices.

And that's without any changes in investor expectations for future dividends. If those fundamental expectations change, say with companies acting to cut dividends to preserve their cash flows because they anticipate sharply lower revenues and earnings from experiencing supply chain disruptions, then the market could be in for a really rocky ride.

We told you the S&P 500 was getting pretty interesting. The next several days should see quite a lot of action, particularly from central banks looking to head off as much trouble as they can, which will have an effect on stock prices. How much remains to be seen. 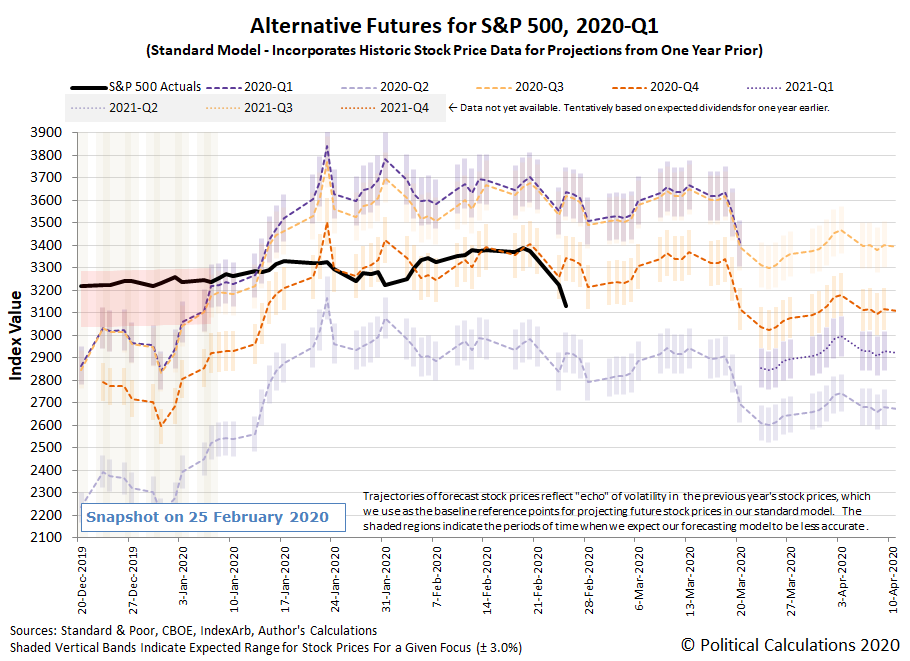 Will the new Lévy flight event continue, or will something change to refocus investors on the more distant future horizon? We'll see what tomorrow brings!

Update 26 February 2020: The S&P 500 continued down, but by a small amount compared to the previous two days: 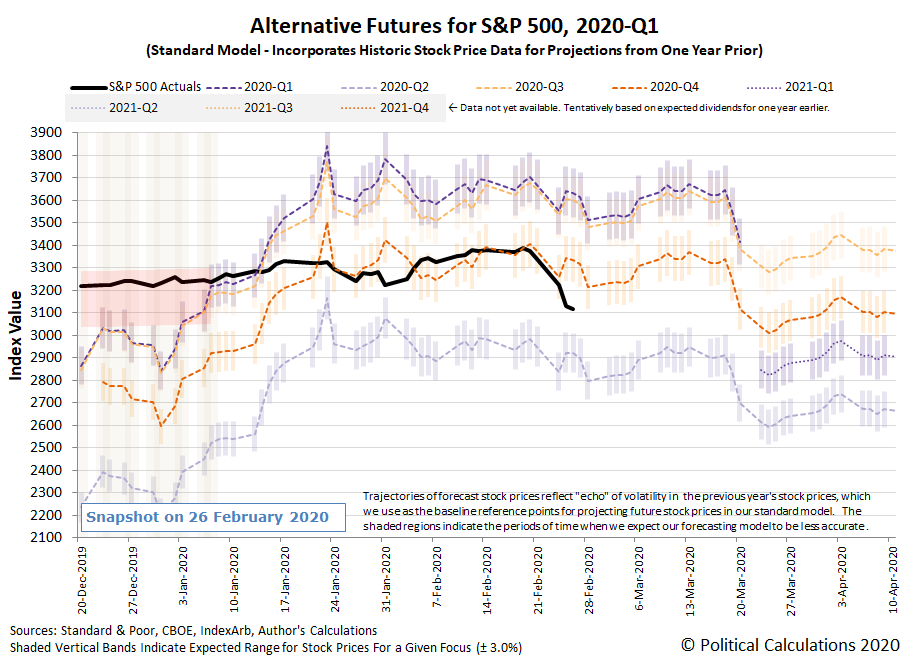 Update 27 February 2020: Another big drop as the market's latest Lévy flight event continues. We're likely within several percent for where the market will stabilize in the short term as investors have nearly completed shifting their forward-looking focus from 2020-Q4 to 2020-Q2. 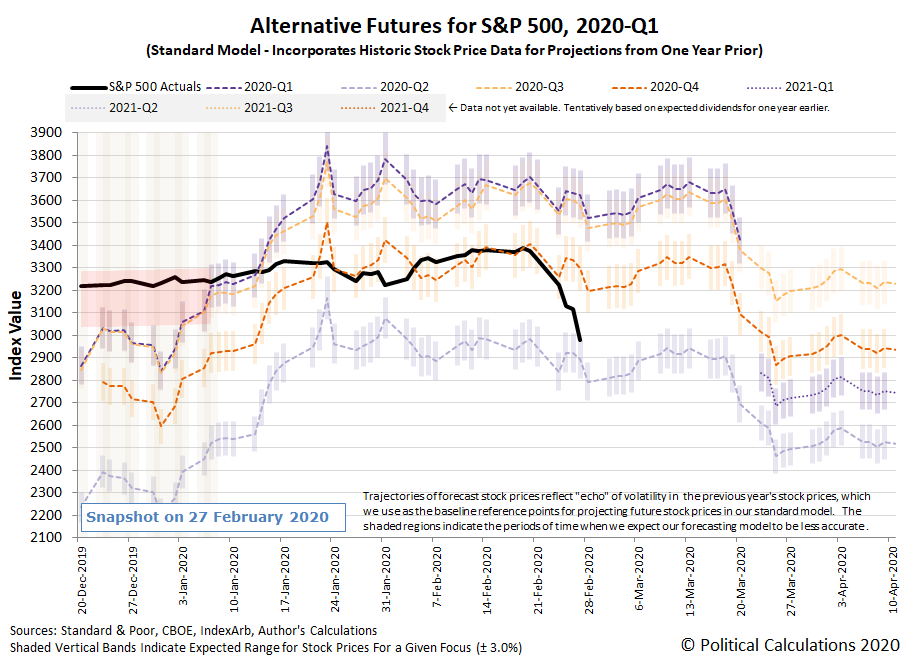 The S&P 500 has recorded its fastest ever correction (a decline of at least 10%) at this point.