Political Calculations
Unexpectedly Intriguing!
14 April 2020
What Life After The Coronavirus Lockdowns May Be Like 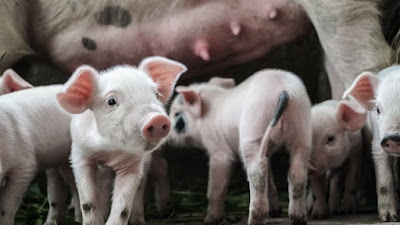 In 2013, a coronavirus epidemic swept across 32 states, killing eight million.

But you never heard much about it in the news, did you? That's because the coronavirus epidemic of that year decimated the population of hogs on U.S. farms. If you did hear about it, it was likely as an explanation for why the prices of pork-related products rose at the time and why their supply had diminished.

Like the SARS-CoV-2 virus behind 2020's COVID-19 pandemic, the Porcine Epidemic Diarrhea Virus (PEDv) had its origins in China, where once it arrived in the U.S., the coronavirus quickly spread among hog farms where the population of pigs had no immunity. There was no vaccine and no veterinary treatment to combat it, so American farmers had to quickly develop other approaches to cope with it.

Those other approaches are very similar to the personal hygiene and 'social-distancing' practices that many Americans have adopted to reduce their risk of infection from the COVID-19 coronavirus. The following extended excerpt from Smithsonian describes what they did to stop the fast-moving PEDv coronavirus:

In the absence of reliable, widely available medical interventions, farmers and veterinarians turned most of their focus to diagnosis and containment. "We already had pretty solid biosecurity protocols on farms," Trudeau says. "But this really made us take a step back and think, because it was traveling so easily which we hadn't necessarily seen with other viruses before."

Suddenly, Trudeau says, everything moving to and from a farm was subject to intense scrutiny. No surface was too small or too hidden to escape the reach of a microscopic virus. All pigs and people had to be treated as potential vectors for disease.

"Farmers effectively shut down their farms," says Scott Kenney, an animal coronavirus researcher at Ohio State University. "Friends from other farms weren't able to come in, sales reps weren't allowed to come in. And the people who did had to change their clothes before going into farms."

Trudeau says that most places that dealt with pigs already had a "shower in, shower out" policy in place that required visitors to remove their clothing, wash off with soap and water, and don a clean outfit before making any contact with animals. Exiting the building then required the same procedure in reverse. "It's very extensive," she says. "Nothing is coming onto the farm that hasn't been washed."

In the pre-PEDv era, not everyone was vigilant about following showering guidelines, Trudeau says. By necessity, the outbreak changed that, says Marie Culhane, a veterinarian at the University of Minnesota. "It's not business as usual during an outbreak."

Farmers, feed distributors and transport personnel became ardent disinfectors, regularly sterilizing frequently contacted surfaces, including equipment. Because the insides of trucks were especially difficult to clean, drivers ferrying supplies no longer left their vehicles, asking farm personnel to do the unloading themselves. And any individuals who had recently spent time in a heavily pig-populated place, like a county fair, would wait at least 72 hours before stepping onto a swine establishment—a form of self-isolation.

Importantly, farmers put these measures in place without waiting for their pigs to show symptoms, Torremorell says. "When that virus infects older animals, they can be shedding continuously and have no clinical signs. You just don't know."

The payoff wasn't instantaneous. But slowly the epidemic began to wane, and by the fall of 2014, PEDv had finally loosened its grip. The virus has reappeared in the years since, flickering briefly in pig populations before being stamped out. Many of the pigs that survived the first epidemic became immune to further infection. But farmers are also much more savvy nowadays. Whenever the pathogen appears, "they basically shut down things right away, like going into lockdown," Torremorell says. "When that happens, there's not as much spread."

And that's the way life will continue, with periodic episodes of physical distancing and other quarantine practices, until there's an effective vaccine or until the herd develops a significant level of immunity. Shower in, shower out.

Update 15 April 2020: Added the last sentence, inspired by Michael Wade, who writes far better headlines than we do!