The state of Arizona appears to be turning a corner in the rate of incidence of coronavirus infections.

After having become an epicenter for COVID-19 in the United States, the state is now seeing positive developments in its rate of new hospitalizations, cases, and deaths attributed to the SARS-CoV-2 coronavirus.

The improvements now taking place do not appear to be related to actions taken by the state's officials. Instead, they appear to be related to the end of a surge in hospitalizations and cases associated with the timing of political protests that followed the tragic death of George Floyd on 25 May 2020 as he was being arrested by Minneapolis, Minnesota police officers in that city. In Arizona, large scale anti-police protests took place in response to event in several cities from Thursday, 28 May 2020 through Sunday, 7 June 2020, which subsequently dwindled before finally petering out on 16 June 2020.

While they occurred, the protests provided an ideal incubation space for spreading coronavirus infections that appears to contribute to Arizona's post-lockdown surge in cases, hospitalizations, and deaths.

Let's start by reviewing the time series history of confirmed SARS-CoV-2 coronavirus cases in Arizona, which we've continued to refine from our previous analysis. Here, we can combine what we know about the typical progression of a COVID-19 infection from exposure to the onset of symptoms with the lag in reporting confirmed test results to identify significant events that correspond to changes in the rate at which the infection spreads, which we've updated with the latest best estimates from the CDC.

The first chart below shows the time series data for newly confirmed COVID-19 cases in Arizona from 3 March 2020 through 14 July 2020. 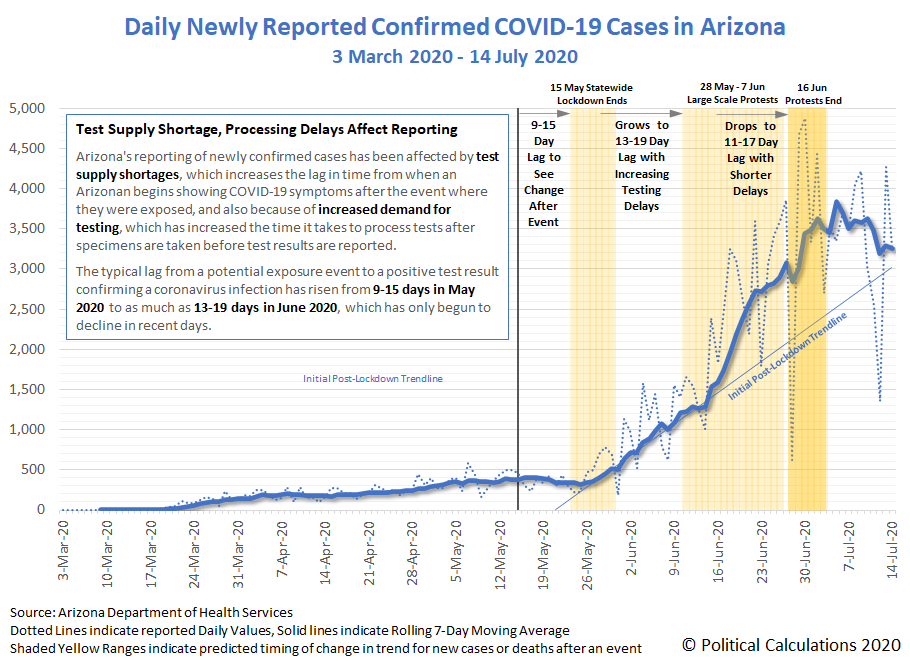 Although the median time from exposure to onset of COVID-19 symptoms falls between 5 to 6 days, Arizona has experienced a variable lag in the reporting of COVID-19 test results. Prior to 21 May 2020, Arizonans with symptoms seeking a COVID test could typically do so within a day, with results typically returned within 4 to 8 days after test specimens were collected, giving an estimated 9-15 day lag between when a change in trend might be observed following a significant event that changed the population's risk of exposure to the coronavirus.

That changed after 21 March 2020, with a shortage of testings supplies increasing the lag from the appearance of COVID-19 symptoms to when a test could be conducted from 1 to 3 days, and also delays in the processing of tests because of increased demand, which delayed test results from being reported until some 7 to 10 days after a patient was tested. Altogether, that increased the expected lag in the reporting of a confirmed COVID-19 case to fall somewhere between 13 to 19 days after initial exposure. After 24 June 2020 however, the delay in test results declined from 10 to 8 days, following a peak in testing, so that situation has slightly improved.

The chart above shows a surge in new cases coincides with the expected lag following the lifting of Arizona's statewide lockdown that closed business and ordered residents to stay-at-home on 15 May 2020, which occurs within the expected period following that date. The increase in exposure to the coronavirus that followed then led to the shortage of testing supplies and the increased processing time for test results.

Those delays affect the timing of the next acceleration in the rate at which newly confirmed cases were reported. This secondary surge generally coincides with the expected lag in timing following large scale political protests that occurred in large Arizona cities between 28 May 2020 and 7 June 2020. These events contributed to a surge in new coronavirus cases in Arizona well above the trend that had been established just from the lifting of the state's lockdown orders.

While these events overlap the Memorial Day holiday weekend and the following weekend, the steady rate at which the number of confirmed cases rose throughout the period 13 to 19 days after these political protests point to their role as a major exposure event for the spread of coronavirus infections within Arizona. If the holiday and social events occurring on the following weekend were significant contributors to the increased exposures to COVID-19, we would see their effect as short duration spikes in the rolling 7-day average of newly confirmed cases during the forecast period.

More telling is the peak and decline in newly reported positive COVID-19 test results that immediately follows the period in which an increase in coronavirus exposures related to political protests would be expected, which is indicated on the chart above with the darker yellow shaded vertical band. That positive change directly coincides with the end of the political protests and the increased risk of exposure to coronavirus infections they fostered.

Two weeks ago, the data for coronavirus-related hospitalizations in Arizona presented an incomplete picture. However, that situation has changed with the additional data that has since become available. What we find is that the timing of new hospitalizations for COVID-19 largely confirms the picture painted by the data for newly confirmed cases within Arizona.

The next chart shows what we can now visualize in the state's data for hospitalizations. 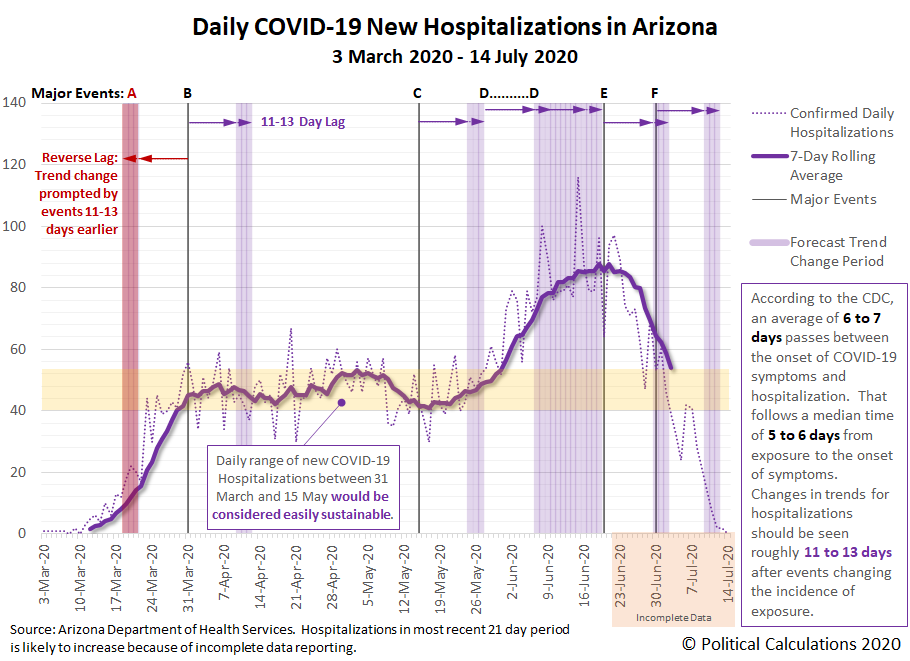 We've assembled our analysis in the following table, where the letters correspond to the timing of events indicated at the top of the chart.

It is still too early to see if there is any effect from the new "mini-lockdown" that state officials have implemented in closing selected businesses associated with higher rates of exposure to the coronavirus on 30 June 2020. It takes several weeks for the data for hospitalizations to become complete enough to see any changes in trend. As a general rule, the older the data, the more complete it is.

We can do similar analysis using the reporting of deaths attributed to COVID-19 in the state, though reports of deaths lag some three to four weeks behind when they actually occurred. The next chart indicates what we find in that data. Arizona reports two different sets of data for COVID-19 death. It initially reports a tally of cumulative deaths each day, where the dotted gray line in this chart represents the day-to-day change in that figure, and the heavy gray line is its rolling 7-day average. The state also reports time series data for when the reported deaths actually occurred, with the dashed orange line indicating those figures, and the heavy orange line indicating its rolling 7-day average. This data is frequently revised over a three to four week period, though the older the data, the more complete it is.

That's an important consideration because the state's initially reported death data is still being filled in for the period where we might see a change associated with the political protests in the state. What we do see is that the trend for deaths initially leveled off in the period where we would expect to see a change related to the protests, then began sharply increasing some 5-6 days later. That might be explained by two factors.

First, since the protests were largely attended by younger individuals, the initial leveling off suggests the rate of COVID-19 deaths in Arizona stalled because the coronavirus is far less deadly to younger people. Second, the delay of 5-6 days before the trend in deaths begins rising again suggests that the people who participated in the protests as they became infected went on to spread it to older people, who are substantially more at risk of COVID-19 fatalities.

Since the data for COVID-19 deaths is still in the process of being reconciled, it will be another couple of weeks before we will have a substantially complete picture of how the anti-police protests in Arizona may have contributed to deaths from the coronavirus within the state.

The overall takeaway we have from the available data is the political protests sustained over several weeks were a significant contributor to exposure to the coronavirus in the state of Arizona, well above and beyond what the state was on track to experience from simply lifting its initial statewide lockdown order.

We think the end of the protests, more than any other factor, is responsible for Arizona now turning the corner in its crest of coronavirus cases.