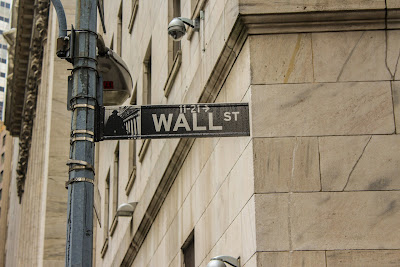 But the index has a deeper history. In 1928, Standard Statistics Bureau, one of the pre-merger companies that later became today's Standard & Poor, created a daily composite stock market index made up of 90 individual stocks of U.S. corporations, with historical data going back to 1925 to provide some built-in history for the new index. The combination of 50 industrials, 20 railroads, and 20 utility companies provided one of the first broad measures of the U.S. stock market, expanding beyond the 30 industrial firms covered by the Dow Jones Industrial Average. Around the same time, Standard also created a weekly index to track the collective stock market performance of 500 U.S. companies, which is eventually what took over in 1956 as a daily index.

Of course, these companies didn't suddenly materialize into existence in 1928. Many of these firms have stock price data that extends back much earlier. In 1938, the Cowles Commission for Research in Economics worked out their equivalent market index performance going back to 1871, which means we really have 150 years worth of data for the U.S. stock market. Before 1871, the stock price data for publicly traded companies becomes too sparse to track, which is why the historical data only goes back this far.

We thought we'd mark the sesquicentennial for U.S. stock market data with the following charts, showing the average monthly index value, the trailing year dividends per share and trailing year earnings per share for the S&P 500 and its predecessor indices from January 1871 through December 2020. Please click the images to access full size versions of the charts. 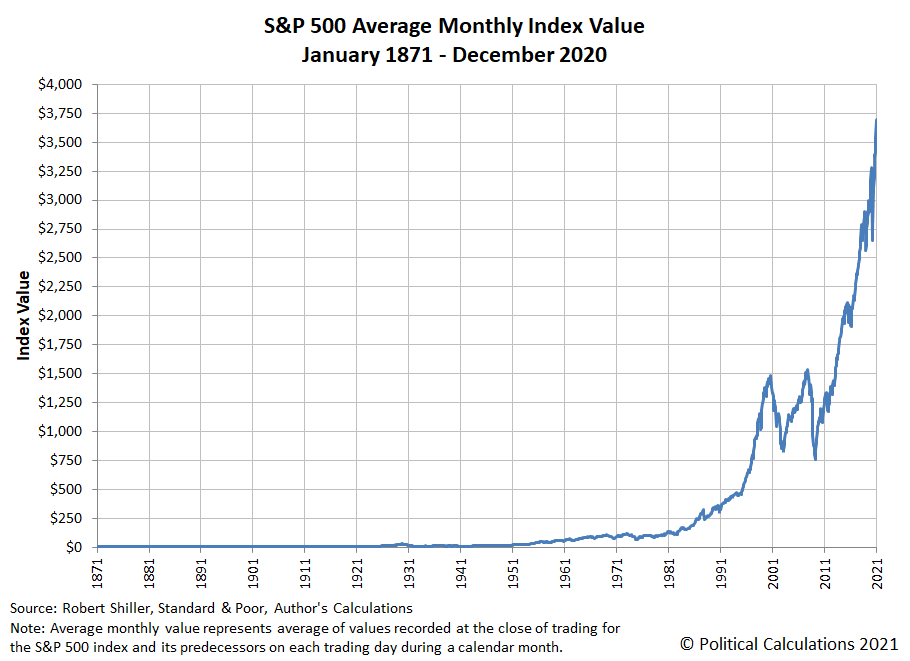 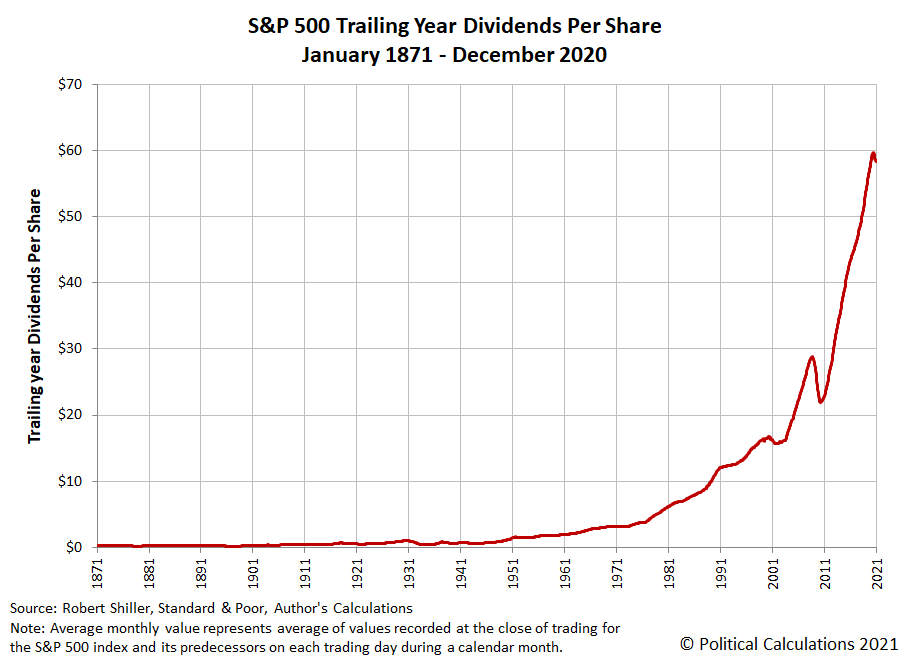 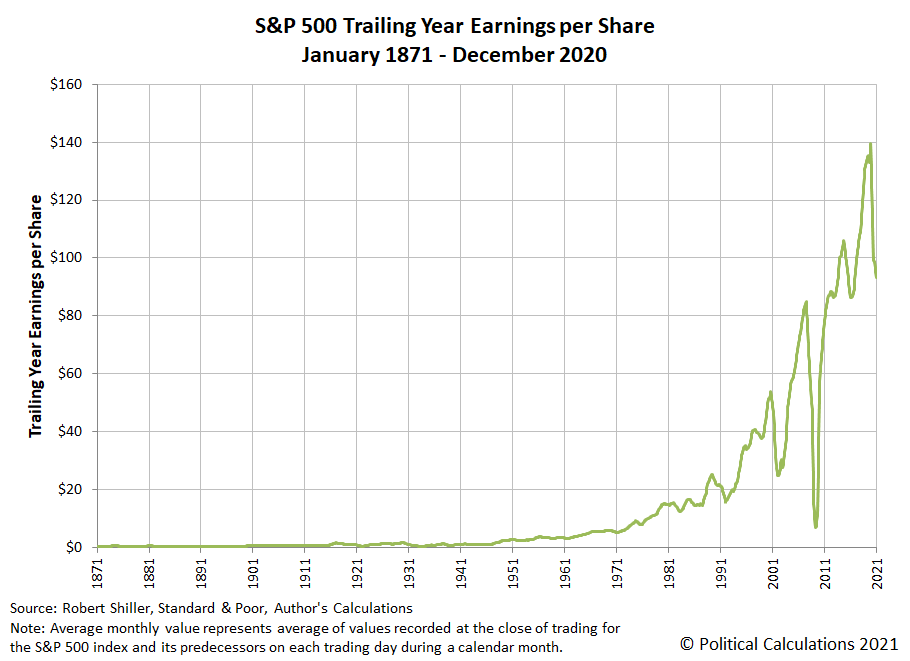 Thanks to exponential growth, the data on these charts look something like hockey sticks, so we generated the following charts to show the same data on a logarithmic scale. 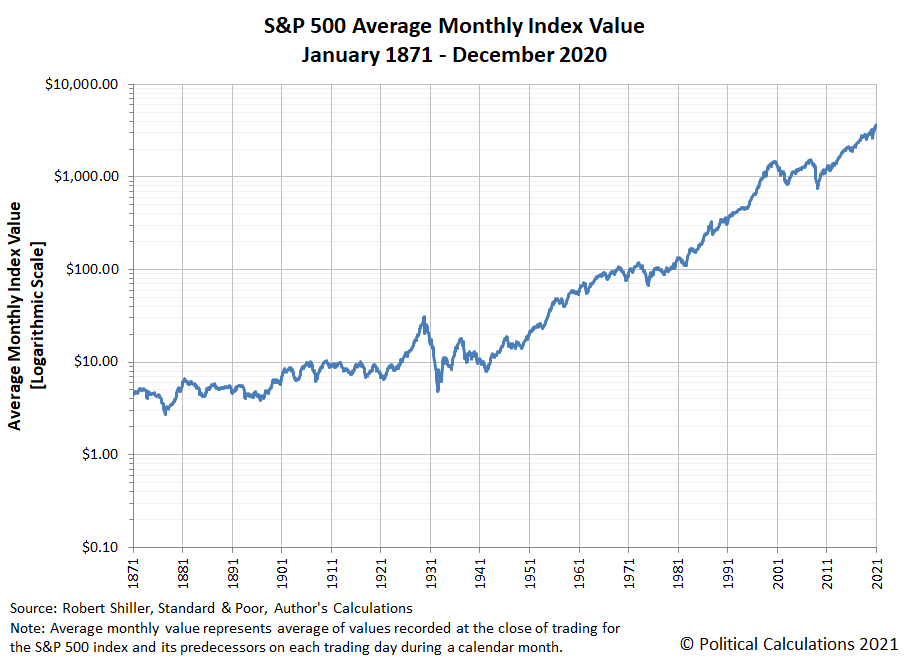 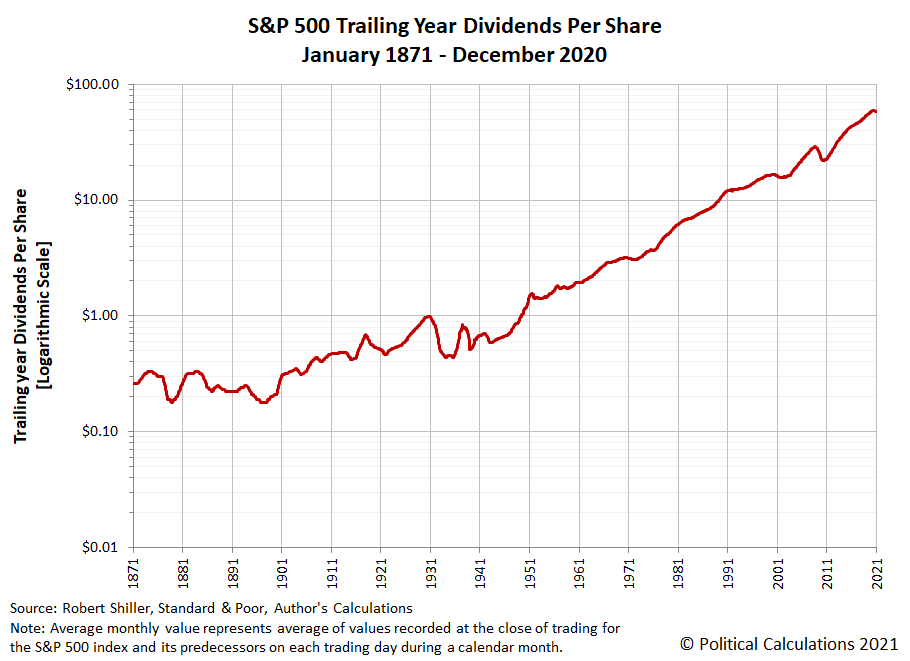 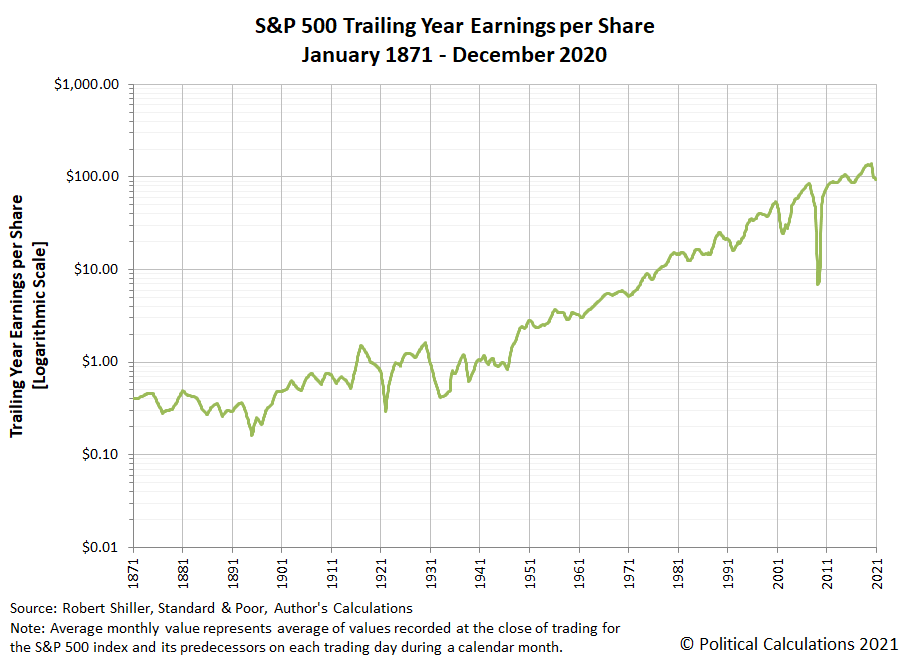 If you'd like to get the data for any point of time shown on these charts, we have dedicated tools that can accommodate you. The links below will take you to the historical data we make freely available.

The S&P 500 at Your Fingertips

Our signature tool providing access to the whole history of the S&P 500's average monthly prices, trailing year dividends and earnings per share! As a bonus, it also calculates the rate of return that would have been realized between any two calendar months, with and without the reinvestment of dividends, and also with and without the effect of inflation.

It's one thing to build up a nest egg, it's another thing to make it last for as long as you might need it! This tool puts the history of the S&P 500 to use to see how your investment withdrawal strategy would have fared through some of the best and worst eras for the U.S. stock market.

This is the only tool you'll find anywhere for indicating the quarterly earnings and dividends per share that would have actually been reported for the S&P 500 (and its predecessor indices and components), going all the way back to the first quarter of 1871....