The U.S. Census Bureau's data for trade between the U.S. and China indicates the value of goods China imports from the U.S. in August 2020 shrank from the previous year's total. With the growth rate of a country's imports providing an indication of its relative economic health, this change coincides with negative developments for China's economic growth. 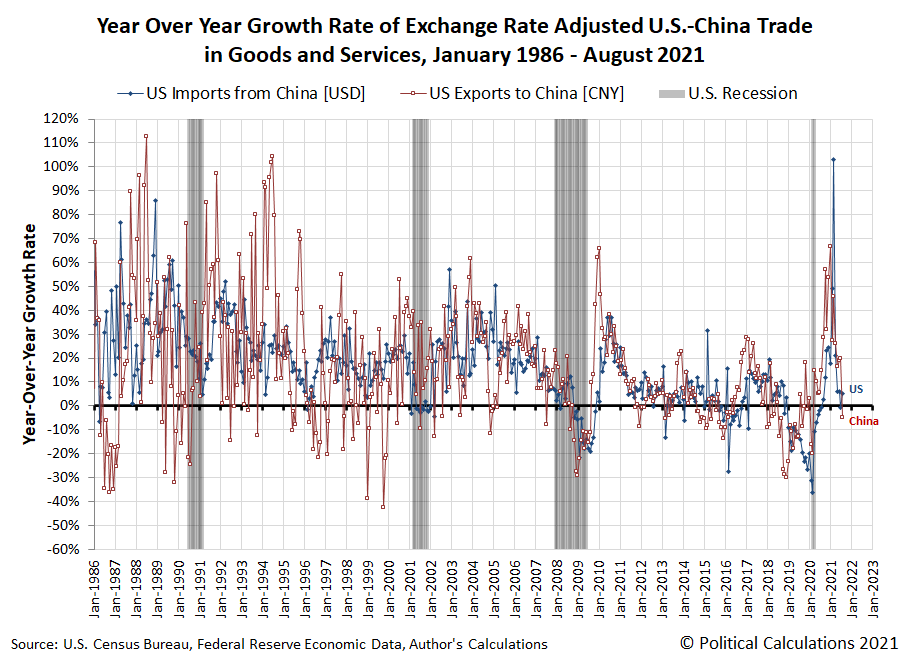 For the trailing year average in the overall volume of trade between the U.S. and China, we find the trend is still drifting upward on inertia, but is slowing. We find the gap between it and a "no coronavirus recession" counterfactual increased slightly from $7.5 billion to $7.6 billion in August 2020. We find two main contributing factors to China's reduction in U.S. imports. First, China shuttered its Ningbo-Zhoushan port facility in its latest round of COVID lockdowns for two weeks after a worker at the facility tested positive for COVID-19. The port is the third largest in China, which disrupted the flow of trade both in and out of the country.

Second, and perhaps much more significantly for upcoming months, the Chinese government ordered five aluminum smelters to reduce production on 26 August 2021 in a move it claimed was "part of efforts to stamp out illegal production". At the time, the move sent aluminum prices in China to a 13-year high.

On 9 September 2021 however, a bigger problem became more visible, as the Chinese government authorized the release of oil reserves to "ease the pressure of rising material prices", but which should be read as a confirmation the fossil fuel had come to be in short supply within China.

By 27 September 2021, China expanded its shuttering of factory production to much of the rest of the country, as it cut power production to "meet energy use targets" and to "promote efficiency" in its "efforts to rein in pollution and emissions of climate-changing gases."

In truth, the move was due to a power crunch caused by a shortage of coal, which fires most electricity production within China. The Chinese government's efforts to minimize the disruption from the shortage to China's households by concentrating the reduction in power consumption by its industries caused its manufacturing production to shrink for the first time since February 2020.

That negative development puts the production limits imposed on aluminum smelters in August 2021 into a much different light. Aluminum smelting is very energy intensive, consuming large amounts of electricity. In the face of a shortage of energy supplies, it would make sense to government officials seeking to minimize widespread disruptions to China's economy to start with limiting or halting aluminum smelting to keep producing electricity for other parts of the economy and for households. We think Chinese government officials knew they had a developing problem with shortages of energy supplies in August, but underestimated it, forcing them to impose much more disruptive and draconian power outages in September 2021.

We may already have seen part of that disruption, which will weigh down the global economy. We'll take a closer look at how the Chinese government's response to its shortages of energy supplies may be weighing down the world's economy in the next week.