Although the beginning of that inflation traces back to the passage of the American Rescue Plan Act of 2021 on 11 March 2021, the lifting of state and local COVID lockdowns throughout 2021 initially allowed the average of Americans per capita wage and salary income to increase faster than the inflation Biden's wasteful stimulus fueled. But in 2022, inflation has risen faster.

The following chart shows that effect playing out. Adjusted for inflation, the average earned income for Americans (shown as the blue line) peaked in December 2021, falling in each month since. 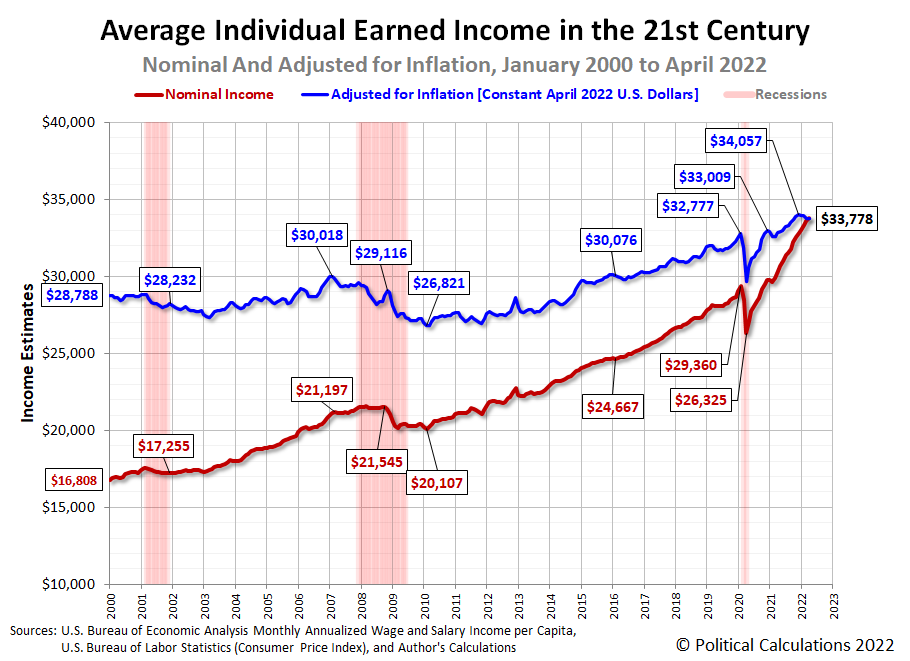 One of the more interesting aspects of the inflation unleased in the U.S. is how different it is from what other nations are experiencing. The Financial Times' Robert Armstrong explains how its different in nature from what the Eurozone is experiencing (boldface emphasis ours):

After the eurozone printed record inflation yesterday, Tyler Cowen had some questions. Why, the economist asked at his excellent Marginal Revolution blog, is European services inflation, at 3.8 per cent in May, running so hot? In the absence of a jumbo-sized American fiscal stimulus package, the European inflation story so far has been about scarce energy. But why should that spell pricier services?

Good questions. So we put them to a few sharp minds on the eurozone. Here are some answers.

First and foremost, hot eurozone inflation is still about energy. Energy prices pass into other prices. This is plain to see in the spread between eurozone headline and core inflation. Pull out food and energy, and eurozone inflation drops four percentage points....

With energy stubbornly expensive, inflation in services categories such as transport and housing have picked up. But there is another piece to this. Prices in areas such as recreation, hotels and restaurants are rising fast too, as Europe enters its first post-Covid summer in several years. Supply is still clearly the dominant factor, but demand is starting to matter too.

This might look uncomfortably close to US inflation, where narrow pandemic-specific inflation gave way to broad price increases. But the comparison is imprecise. For instance, Europe is seeing some goods inflation in areas such as vehicle prices, but nothing like the American dash for used cars. Much of Europe's goods inflation is imported, while the US experience was all about roaring demand.

The biggest difference is in employment and wages. Tight US labour markets (alongside oodles of excess cash savings) are supporting high demand. Not so in Europe, where household consumption in the key eurozone economies has not recovered from the pandemic, as Tomas Hirst pointed out on Twitter yesterday. Hours worked are below pre-pandemic levels too, suggesting labour market slack. Wages aren't yet a big part of Europe's inflation story.

Which is to say that while the inflation rates now being recorded in the U.S. and the Eurozone may seem similar, that similarity is superficial. Conflating the two experiences is therefore a mistake. The paths taken to get to a similar amount of inflation in both regions result from very different causes.

For the U.S., the "tight US labour markets (alongside oodles of excess cash savings)" Armstrong notes are exactly what President Biden's March 2021 stimulus created. Its generous stimulus checks for millions of American households funded an outsized demand for goods and services at a time its especially generous unemployment benefits ensured the U.S. economy would be starved of productive labor to provide them. That proved to be a recipe for making inflation. The worst inflation in over four decades now eating away at the incomes earned by Americans didn't happen by accident.