Every three months, we take a snapshot of the expectations for future earnings in the S&P 500 (Index: SPX) at approximately the midpoint of the current quarter, shortly after most U.S. firms have announced their previous quarter's earnings.

The outlook for S&P 500 earnings has deteriorated since since our last update three months ago. Standard and Poor now projects a new earnings recession, lasting through December 2022. The following chart illustrates how the latest earnings outlook has changed with respect to previous snapshots: 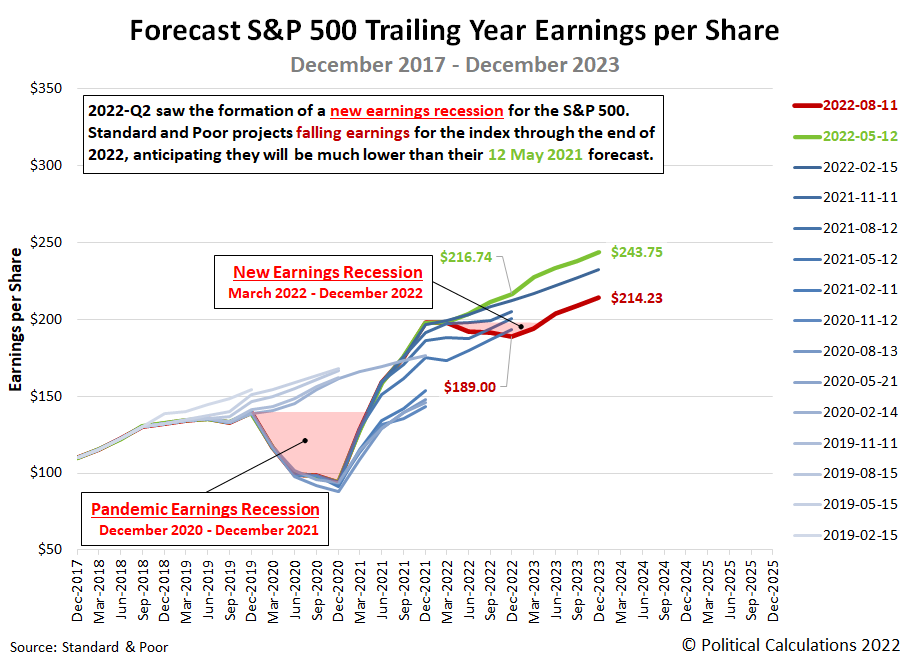 Unlike the semantic games played by pedantic douchebags over the accepted definition of a recession for the U.S. economy, an earnings recession has a simple definition:

“Earnings recession” is usually interpreted as two consecutive quarters of decline. In the case of the market, that would mean that corporate earnings dropped for two quarters in a row.

There is a minor dispute over whether that means consecutive quarter-on-quarter declines or if it means consecutive declines over two quarters with respect to the same quarters a year earlier. However, that dispute is moot in this case. The updated outlook for the S&P 500's reported earnings qualifies as an earnings recession under both these interpretations.

Whether the S&P 500's earnings per share actually experiences an earnings recession through the rest of 2022 now depends entirely on the earnings reports of the index' 505 component firms over the months ahead. Our next snapshot of the index' expected future earnings will be in three months.