This decline is consistent with how the dividend futures-based model would set stock prices if the model's basic multiplier was suddenly reset from the value of -2.5 that has applied since 16 June 2021 to be +2.0 as of 13 September 2022, assuming investors are also focusing their attention on the distant future quarter of 2023-Q2: 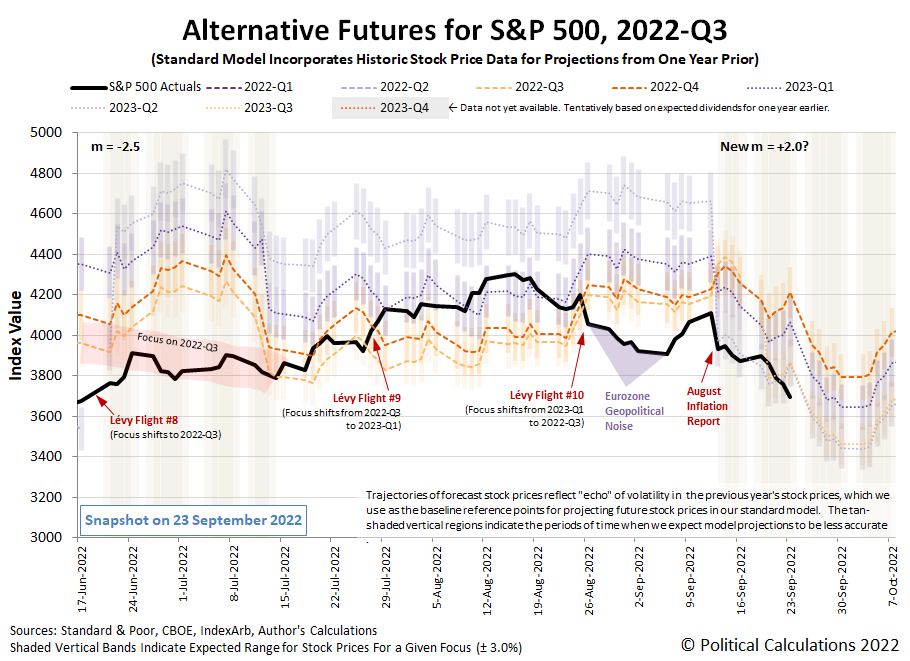 We're surprised by how closely the trajectory of the S&P 500 is tracking along with the model's projection of the index' trajectory associated with investors focusing their attention on 2023-Q2. That's because the model has also entered a period when we expect its projections are being affected by the past volatility of the historic stock prices it uses as the base reference points for projecting the index' future potential trajectories based on how far into the future investors are looking. That's something we'll revisit next week, when we'll estimate how much of the decline in stock prices is attributable to noise and how much is signal based on how investors have changed their view of the market.

Speaking of which, we find other analysts are picking up on just how different today's market is from that of just two weeks ago. Here's how Reuters covered that development on Friday, September 23, 2022:

Across Wall Street, banks are scrambling to adjust their forecasts to account for a Federal Reserve that shows no evidence of letting up in its fight against inflation after delivering another market-bruising rate hike this week and signaling more severe monetary policy tightening ahead.

Once-reliable technical indicators are falling by the wayside. The S&P dipped below its mid-June low of 3,666 on Friday afternoon, erasing a sharp summer rebound in U.S. stocks – the first time in history the index breached a new low after erasing more than half of its losses.

A rout in bond markets added to the pressure on stocks — yields on the benchmark 10-year Treasury, which move inversely to prices, recently stood at 3.67%, their highest level since 2010.

“These are uncharted waters,” said Sam Stovall, chief investment strategist at CFRA Research. “The market right now is going through a crisis of confidence.”

Or rather, the market has entered a new regime. Here are the market-moving headlines from the week that was:

Meanwhile, the Atlanta Fed's GDPNow tool's projection for real GDP growth in the soon-to-end quarter of 2022-Q3 dropped again for the third consecutive week, from 0.5% to 0.3%. The Bureau of Economic Analysis will provide its first official estimate of real GDP growth in 2022-Q3 at the end of October 2022. The BEA has previously indicated the first two quarters of 2022 experienced negative real growth, but that may change as the BEA's analysts release their annual revisions.