Although they may be really expensive and in short supply this year, most Americans Thanksgiving holiday dinner tables will still feature a turkey as its centerpiece. And those that do see that turkey ruthlessly butchered by non-professional carvers who will do more to process the meat into leftover hash than they will to serve elegant slices of turkey to their gathered families and guests. 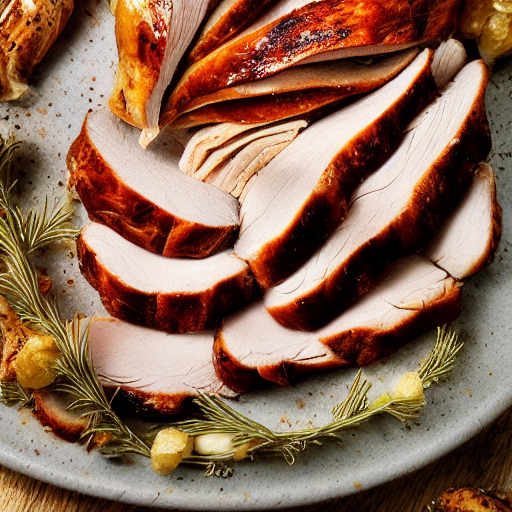 That's because non-professional turkey carvers don't know how to deal with the bones. Wouldn't it have been much nicer if you could have bought a boneless bird? One that still looks the traditional bone-in centerpiece from Norman Rockwell's painting of a Thanksgiving celebration?

Inventor Peter Sieczkiewicz did, memorializing his unique method of preparing edible fowl in U.S. Patent 2,844,844! But before we go any further, Sieczkiewicz makes clear in the patent's description that we're talking about turkey:

For illustrative purposes, the invention will be described with reference to an edible turkey, although it will be appreciated that the method may equally well be employed in conjunction with other types of edible fowl, for example, chickens, geese, and the like.

Got it? If you've got an edible fowl, you can use the Sieczkiewicz method on it! Knowing that now, let's review what's wrong with every other method of preparing turkeys:

Turkeys are now processed in a variety of forms to comply with the needs and desires of different type consumers. In one conventional method, the meat of the turkey is stripped from the carcass and cut to a convenient size for packaging in various sized jars, and can containers. In another case, the flesh of the turkey is maintained intact and the turkey is similarly-packaged for sale in a pre-shaped can or the like. More recently, methods have been devised for completely removing the bones from the turkey and still retaining the skin and flesh structure. However, the latter methods have been dependent for their successful accomplishment upon; forming a plurality of incisions through the skin of the turkey as a preliminary step in order to facilitate and enable the successive removal of the different structures.

It will be apparent that a disadvantage characteristic of all the above methods presently used is the fact that either the skin of the turkey is completely removed or it is severed to the extent that the turkey as a whole does not retain its original appearance. In addition, it will be evident that after the boning operation has taken place, the turkey must be sewn along the incision lines or else firmly bound or tied together with the result that a further detraction from the natural appearance of the turkey will result.

What sane host would serve their guests something that looks like Frankenstein's Thanksgiving dinner? Fortunately, there's now a better way! But before we get into the patented Sieczkiewicz method for deboning a turkey while preserving its classic contours, let's get to the patent's illustrations because we'll need to refer back to them. 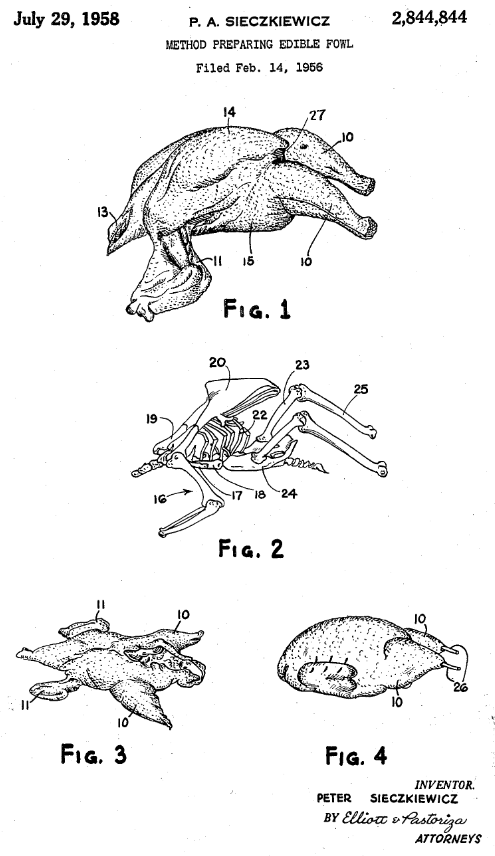 Here's what you're looking at:

Figure 1 is a view of a dressed turkey;

Figure 2 is "a general view of the bone structure of the turkey of Figure 1;

In Figure 1 there is shown a dressed fowl or turkey, as it is received by the butcher, with its intestines, feet and head removed. The turkey is shown as having legs 10 and wings 11. The back portion of the turkey is denoted by the numeral 14 and the breast portion is indicated at 15, while the neck or crop opening is identified by the numeral 13.

We're not going to hold back from this point on. Everything you need to know about deboning a turkey in the most aesthetically pleasing way possible is contained in the following extended excerpt:

In the performance of the method of the present invention, no special tools are required, and the removal of the bones may be, accomplished with a conventional butcher's boning knife, in conjunction with the use of his fingers and fingernails. Towards this end, the first step is to insert the boning knife through the neck opening 13 and begin the successive disjointing and removal of the various bones. The bone removal procedure may be more clearly described by reference to Figure 2.

Initially, the wing bones 16 are disjointed from and severed from the shoulder blade bones 17. The wing bones 16 are thereafter removed through the neck opening 13 as the wings 11 themselves are reversed such that the skin and flesh are turned back inside out. After the wing bones 16 have been removed and the wings 11 turned back, the shoulder blade bones 17 are cut away from their connection to the upper back bone 18 and similarly removed through the neck opening 13.

The next step is to remove the wish bone 19 connected to and forming the upper portion of the breast bone 20.

As this operation is proceeding, it is desirable for the butcher to continually roll back the skin and flesh as the bones are removed in order that he may have access to the bones still remaining within the turkey body.

Where certain larger bodied fowl are involved, it may not be necessary to turn back the skin except during the removal of the leg and wing bones. For the purpose of removing the bones, it is desirable that the butcher employ his fingers for breaking the bone joints, while at the same time utilizing the boning knife and his fingernails as a means of scraping back the flesh and skin, whereby the meat will not be drawn out with the bones.

Continuing with the bone removing steps, the thigh bones 23 are separated from the lower backbone 24 and from the leg bones 25, and the thigh bones 23 are then removed. Thereafter, the leg bones 25 may be simply removed. At this time the only bone structure remaining will be the upper backbone 21 and the lower backbone 24 which as a connected structure may be easily slipped out from within the body of the turkey.

That's the hard part. If you've been following along with your own turkey at home, the next passage will confirm you're looking at what you think you're looking at. It will also provide you with the final instructions you need to complete your deboning procedure:

In view of the progressive normal turning back of the skin and flesh, it will be appreciated that after all the bones have been removed in accordance with the foregoing method steps, the turkey will be substantially turned inside out with the skin in the interior and the flesh exposed. At this time, the turkey may be turned back to its normal position by drawing back the flesh towards the neck opening 13 so that the skin is again in its natural position on the outer surface of the turkey.

Without the supporting bone structure, the turkey will have the flat, flabby appearance as indicated in Figure 3, with the wings 11 and legs 10 stretched out. In order to prepare the turkey for distribution and sale, the turkey may be stuffed in a conventional manner, although it will be appreciated that since the fowl is limp and flabby that a great deal of care must be taken to assure that the skin and flesh will not be inadvertently ruptured or damaged. For this purpose the wings should either be secured with respect to each other, or with respect to the body of the turkey. Similarly, the legs should preferably be held together or to the body of the turkey as the stuffing operation is proceeding. Thereafter, the legs may be provided with skewers or similar strengthening members 26, as indicated in Figure 4, and the wings attached in a conventional manner to the breast portion of the turkey, whereby the turkey may then be precooked and frozen or merely frozen preparatory to eventual distribution and sale to the ultimate consumer.

It's the end of this description that might make a turkey consumer wonder why they bothered removing all the bones from their bird in the first place. Unfortunately, that may also be why the Sieczkiewicz method never caught on with the Thanksgiving-enjoying public, which is why you will not find such a finely prepped fowl for sale at your local grocer over sixty years after the method was originally patented. That's why we've given you the detailed deboning directions from the patent in this edition of Inventions in Everything, because that's all that remains of Peter Sieczkiewicz' inventive inspiration.

More from the IIE Archives

The Inventions in Everything team has previously covered at least two other innovations created to solve the problems of disassembling food!