The odds that the National Bureau of Economic Research will someday identify a month between November 2022 and November 2023 as the point in time when the U.S. economy peaked before heading into recession have risen higher than 1-in-10.

That's up from the 1-in-15 odds we estimated a month earlier. Since that time, two things happened to make a recession more likely:

For this update to the recession probability track, these two changes combined to shift its trajectory downward and to the right. It has reached a higher probability of recession of 10.8%, which is to say the probability is now closing in on odds of 1-in-9. 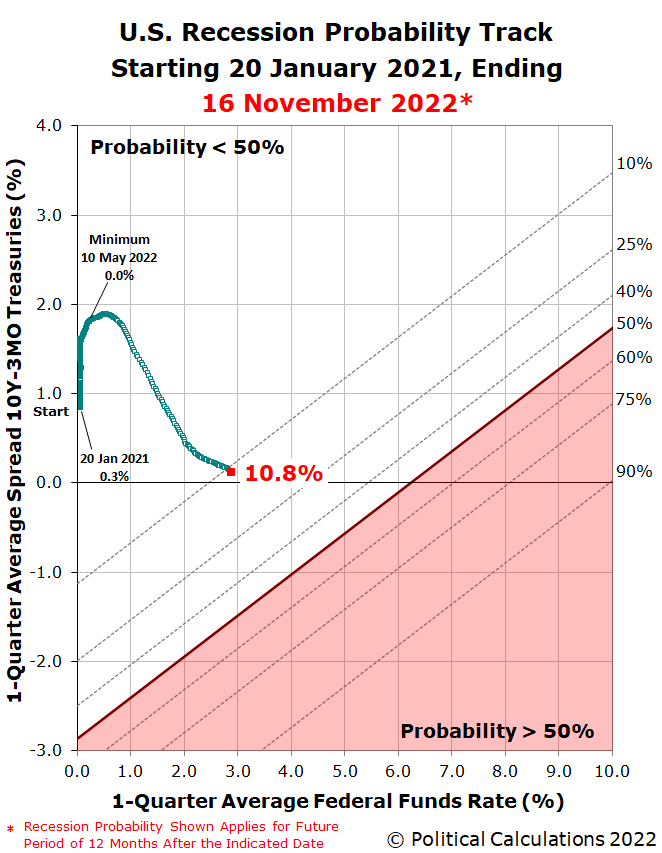 Of the two changes, the Fed's rate hike was the bigger driver for increasing the probability of recession.

The Recession Probability Track is based on Jonathan Wright's yield curve-based recession forecasting model, which factors in the one-quarter average spread between the 10-year and 3-month constant maturity U.S. Treasuries and the corresponding one-quarter average level of the Federal Funds Rate. If you'd like to do that math using the latest data available to anticipate where the Recession Probability Track is heading, we have a very popular tool to do the math.

Our next update will come shortly before the Federal Reserve's Federal Open Market Committee's next two-day meeting on 13-14 December 2022. At the end of that meeting, the FOMC is expected to announce they'll hike the Federal Funds Rate by a half point according to the CME Group's FedWatch tool.

Assuming the same yield curve inversion and Federal Funds Rate as today, the recession probability track could rise to over 17% by that time. That would put the odds of the NBER finding the next recession began sometime between December 2022 and December 2023 at better than 1-in-6. That's *before* the Fed's next anticipated rate hike. The odds will only rise higher with it.

We started this new recession watch series on 18 October 2022, coinciding with the inversion of the 10-Year and 3-Month constant maturity U.S. Treasuries. Here are all the posts-to-date on that topic in reverse chronological order, including this one....