When we created our "Lemony Snicket and the S&P 500" tool, we included a feature that would allow our tool's users to account for inflation during the terms of their hypothetical "absolute" best and worst case investing scenarios.

But, that left us with a hard question for us to answer: what rate(s) of inflation should investors use in making their investment decisions?

There are two main factors that make answering this question tough. The first factor is that inflation can be pretty volatile. We've had periods of double-digit inflation here in the U.S., as well as periods of negative inflation (or deflation). The second factor is time. The range of inflation data that an investor should consider should correspond to the length of the time period they expect to hold their investments.

In our "Lemony Snicket" tool, the best information we had available to provide our readers came from Bryan Taylor of Global Financial Data (via this 43.0KB Word document), which showed the range of inflation data for selected 30-year periods beginning in 1871.

Those are the kinds of questions we answer here at Political Calculations! And to do this job, we went straight to the source: the U.S. Bureau of Labor Statistics' record of the Consumer Price Index for All Urban Consumers (CPI-U) averaged across U.S. cities for each month since January 1913. This inflation data has been collected continuously since 1919 and represents the oldest measure of inflation in the U.S. (the index was estimated back to 1913 to provide a reference for comparison in the data's early years. While others have estimated CPI-U for earlier years, 1913 represents the base year for the BLS' officially tabulated data.)

Using this data, we generated the following chart to map the extremes of inflation for periods ranging from one-month to 90 years. We utilized rolling periods of time in generating the chart to find our extremes to map. For instance, the first one-year period we considered began in January 1913 and ended in December 1913, while the second one-year period began in February 1913 and ended in January 1914, and so on until we ran out of months in September 2006 (and we did this for every fixed period of time from one-month to 90 years!): 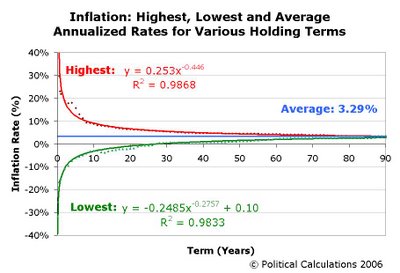 Our first surprise was to see that the average rate of inflation in the U.S. for every period of time we measured since January 1913 is 3.29%, instead of the 2.5% we had set as our original default data in our "Lemony Snicket and the S&P 500" tool. (Depending upon the time period, this figure fluctuates within a range between 3.1 and 3.4%. The average rate of inflation for of all CPI-U data is 3.29%.)

Our next step was to generate the formulas you see in the chart above that effectively approximate the historical bounds of inflation in the U.S. These formulas are utilized in our tool below, which will provide you with the approximations of inflation you should consider when selecting potential investments:

In looking at the chart again, we're intrigued by the "bump" for the highest limits of inflation (where the actual historic inflation is significantly above our mathematical model), which occurs for periods of time ranging from 2 years through 6 years, while all the other actual data points fit well on our curve. We'll be taking a closer look at the underlying data in days ahead.