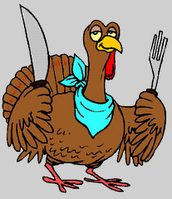 Last year, for no good reason at all, we dove into the seamy underbelly of U.S. turkey production and showed what we had long expected: the turkeys occupying prime table real estate in the United States are indeed getting bigger!

This year, we've updated our analysis of the very revealing statistics and we've found some disturbing trends that are not being reported by the mainstream media. Or even the Food Network! That's why we've opted to present our dull data analysis as sensationalistically as possible! For instance, did you know that the volume of U.S. turkey production has plunged below levels not seen since 1989? 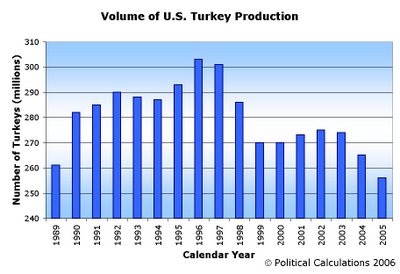 You would think the media might notice some 47 million fewer turkeys walking around U.S. farms. Could they be in on the conspiracy?! Are they part of the turkey-industrial complex? 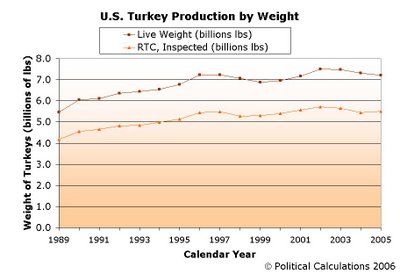 That's right! 47 million fewer birds and their combined live weight only dropped by 26 million pounds? But wait – things get even more disturbing as the combined Ready-To-Cook (RTC) - Inspected weight of U.S. turkeys has increased by some 58 million pounds over 1996's 5.466 billion pounds to 2005's 5.504 billion pounds.

Combined, these facts can only mean one thing: today's turkeys in the U.S., despite being substantially fewer in number, are much meatier than the turkeys of less than a decade ago. Oh, the horror, as this can only mean that the increasing productivity of the U.S. turkey farmer is growing unrepressed! The proof is in our next chart: 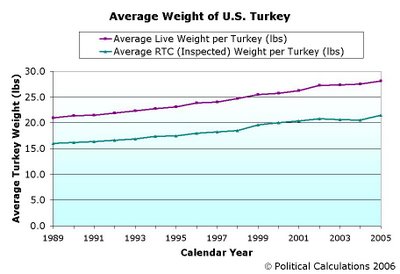 Otherwise, what's to stop these free-market turkey farmers from achieving their ultimate goal – the creation of the "super turkey," which would weigh over 7.2 billion pounds and be able to meet the annual turkey consumption needs of the entire United States. Write and call your representatives today!