Political Calculations
Unexpectedly Intriguing!
May 25, 2007
The Distribution of Income Earners by Age Group for 1995 and 2005 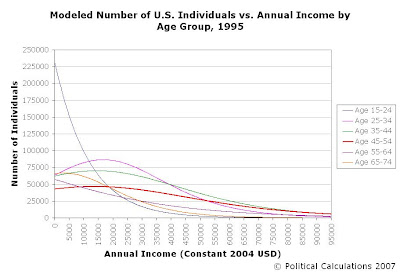 And here's the distribution we've modeled for the same age groups and constant 2004 U.S. dollar income range for 2005: 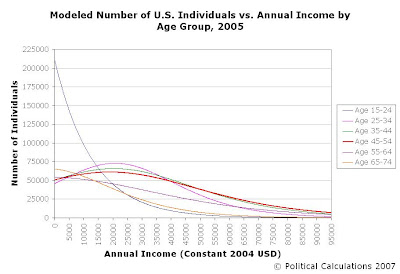 We'll be comparing each age group's distribution in a later post (and introducing a tool that will allow you to find the number of income earners within any income range from $0 to $95,000 constant 2004 U.S. dollars, but in the meantime, here's a direct comparison of the totals for each age group across our income spectrum: 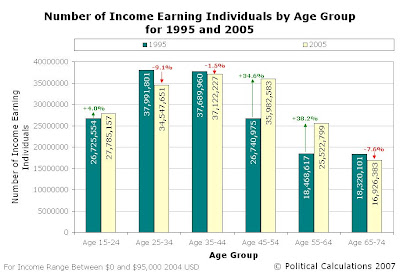 Since we've already established that the Age 45-54 range for both 1995 and 2005 represents the peak earning years for U.S. individuals, what do you suppose the effects of this demographic change would be upon the distribution of income within the United States during this period? In other words, what effect would this change within the U.S. workforce have upon income inequality in the United States?

Update: For the curious, the two charts at the top of this post show the number of individuals within each consecutive $100 interval from $0 to $95,000 in constant 2004 U.S. dollars!