For reasons we don't understand, a surprising number of Google searches for the average wage in the U.S. has been taking place over the last couple of weeks. That's good, because we built a tool back in 2005 for approximating the historic data back to 1951 and for projecting where the average U.S. annual wage will be in the future, so a lot of people have found their way to us.

The problem in modeling what the average annual pay will be in the future lies in the unpredictable timing of economic recessions, which have the effect of dramatically reducing the annual incomes of top income earners. Here, as we've previously shown, the annual incomes of the top 1% of income earners in the U.S. can be pretty volatile from year to year. In fact, this group was the most affected of all income earners in the years from 2000 through 2005 and it's only been within the last two years that the income earned by people represented by this percentile group each year has recovered to the levels last seen in the Dot-com Bubble days of the late 1990s and 2000.

Our previous model was too simple in that it followed a simple exponential curve - unless we were to adapt it each year to take into account the most recent data, projections into the future would invariably move off target. And because it was built using data available through 2004, the influence of the income-booming years of the top 1% of income earners in the late 1990s ensured that the future projections were way too high.

So, we went back to the drawing board. Or more specifically, we took the historical data and went to ZunZun, the web's premier online curve fitting and regression analysis resource. Here, we sought an exponential function that was "stretched" to the right to account for the effects of recessions upon the U.S. average wage. The following chart shows the basic form of the new model we're using: 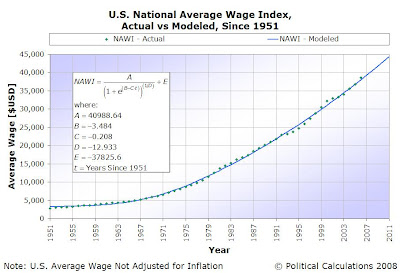 Just to be clear, there's nothing magical about any of these numbers identified in the chart above - they're simply the product of our regression analysis. What they do for us however is potentially better predict the level of average wages than our previous model! Our remodeled tool is below:

For 2007, the tool above anticipates that the average wage in the U.S. will come in at $39,273. We actually expect that this figure will come in on the high side of that figure at roughly $40,000. Whether this model holds up will depend on how well the top 1% of income earners actually do in the next several years - we could, for instance, be underestimating where the U.S. National Average Wage Index will be. No matter what though, it should give a pretty good if not great predictions for at least another couple of years!