Political Calculations
Unexpectedly Intriguing!
31 January 2008
We Would Have Lost....

If we had put money on our sentiments yesterday! We're not normally pessimistic, but we have to admit that the combination of bad economic news dominating this election year and what we feel to have been an overstated level of economic growth recorded for the third quarter of 2007 would have led us to put money on the GDP growth rate for the fourth quarter of 2007 showing up in negative territory.

As it happened, the one-quarter annualized Real GDP growth rate came in at a low 0.6% for the BEA's advance release of this figure for final quarter of 2007, and at 2.7% over the much less volatile two-quarter period ending in the final quarter of 2007. Our GDP bullet charts show these figures alongside where both sets of growth rate date were at the end of the two previous economic quarters, and against the backdrop of historic economic growth performance since 1980 (the "temperature" scale): 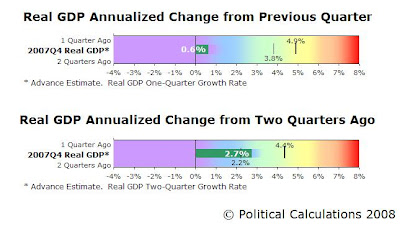 The lousy track record of sentiment however is why we trust our impartial numbers when it comes to peering into the economic future. The following chart shows where we expect GDP to be through the first quarter of 2008 for our Modified Limo GDP forecasting method, as well as where it would be through the third quarter of 2008 using the Skeptical Optimist's Climbing Limo forecasting method: 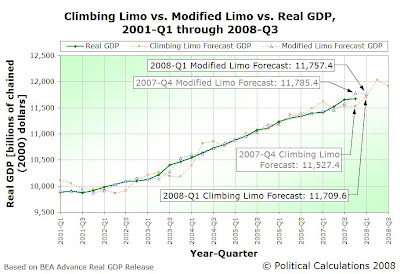 Isn't it cool that we can have an economy that the media screams about being especially volatile, yet we can still pretty reliably anticipate where GDP will be some three to nine months in advance? And all we have to do is learn to ignore the screaming media....