Fourteen days ago, we used the combination of S&P 500 dividend futures and the historic correlation between the timing of stock market bottoms and the peaks of distress in the market as measured by the S&P 500's price-dividend growth ratio to anticipate when the market might hit bottom in its current turmoil. At that time, we found that the year-over-year change in the S&P 500's dividend growth rate would hit zero later this year in either September or October and speculated that the stock market, as measured by the calendar month's average S&P 500 index value, would bottom out in these months or very soon thereafter.

Update 6 February 2008: And since we wrote this, things have changed even more! See here to catch up with the latest of what we see!

Not long after the first core interest rate cut, the dividend futures market began shifting dramatically, shifting which continued after the second core rate cut. The dividend futures have held fairly steady since last Friday, 1 February 2008, suggesting that this movement in the futures market from the two federal funds rate cuts is largely complete. The chart below captures the magnitude of this movement, showing how the year-over-year growth rate of S&P 500 dividends per share has changed from 23 January 2008 (represented by the dashed line) through 5 February 2008 (the green points): 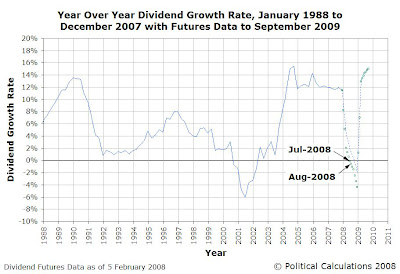 We see in the chart that the year-over-year dividend growth rate would now reach the zero growth point in July 2008, some two to three months sooner than we had anticipated back on 23 January 2008. Since this value is in the denominator of the price-dividend growth ratio, this value indicates that the overall level of distress in the market will peak this July. As we've seen in the correlation between the peaks of distress and market bottoms in the modern market era during disruptive events, such as recessions, we would now anticipate that the market will reach its bottom in the current cycle later this year, now very likely in either July or August.

The nature of the shifting that we've seen in the future values of dividends as predicted by the dividend futures market has been for a steeper, deeper decline in dividends compared to the previous year's values, followed by a strong recovery in these values. This trend is reflected in what the market anticipates for the future level of dividends, which appears in the following chart on the right as the "bucket" feature, the bottom of which has shifted downward from where it was on the morning of 23 January 2008: 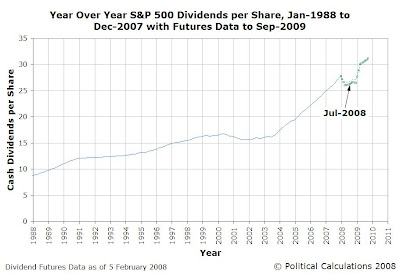 In related news, we were pretty amused to hear Gary Kaltbaum's take on when the market might hit bottom on the radio last Friday. Without getting into the radio broadcast transcription business, he speculated that we would see the market reach bottom in October because, in our paraphrase, 'the market has a history of hitting bottom in October!'

Fourteen days ago, based on our previous analysis, we would have agreed with him on the timing, if not the reason! Facts change and we adapt, and we suspect, so does Gary K (although one should ask when he's finished basking in the glow of the Giants' win on Sunday!) For all we know, we may be hugely wrong and the market will bottom in October. Or it might have already. Or it will at some other time. The truth is that we only suspect that the stock market will reach its bottom on the schedule we're suggesting and the deeper truth is that we have no way to precisely predetermine the exact date, week or month that it will. For that matter, nobody else does either.

But it would be truly cool if this method actually works! And at the very least, we may be onto a tool the monetary policy makers at the Fed might be able to use to get good, solid feedback on how their moves are impacting the U.S. economy. That's important since one of the things we observed in our previous analysis that we didn't discuss is that periods of recession in the post-1952 modern U.S. economy tend to end shortly after the level of distress in the stock market peaks. At this point, it appears that the Fed's rate cuts may well have pulled the peak of distress forward enough in time to forestall the NBER from recording a recession for this year.

And that would be truly cool too!