Going back to the tax rates of the 1990s doesn't mean that households will pay 1990s taxes. Because the tax brackets haven't risen along with incomes, average taxes would be significantly higher, and grow each year.

If the [Bush] tax cuts expire, income-tax revenues by 2018 will rise to 10.8% of the total economy from 8.7% today – an increase of 24%. Compared to the average over the last 50 years, allowing the rates to rise would increase tax revenues by 32%.

Believe it or not, income taxes will rise even if the tax cuts remain in place, because the revenue-increasing effects of bracket creep more than offset the lower rates. With the lower rates, total income-tax revenues will increase to 9.3% of GDP by 2018. This level is 7% higher than today, and 13% above the 1957-2007 average.

Tax collections from federal personal income taxes will not rise to 10.8% of the total economy on any sort of sustained basis. Regardless of the rates that have been levied against personal income since 1946, ranging from 1954's highly progressive tax rates with a top rate of 91% to today's still progressive, but much flatter tax rates with the maximum rate set at 35% (see our inflation-adjusted comparison between 1954 and today), the federal government's personal income tax collections typically range between 7.2 and 8.8% of GDP: 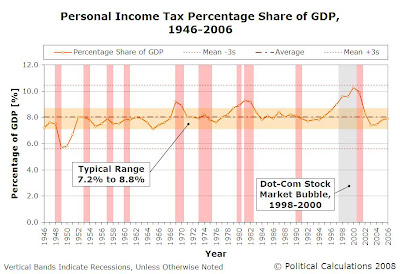 In fact, when the government's personal income tax collections has exceeded 8.8%, it has done so for very specific and not sustainable reasons.

So, why won't the government collect 10.8% of GDP through personal income taxes? Basically, two things will happen to dynamically shift the government's tax collections into the long-term historic range:

Where that second reason is concerned, there are a couple of mechanisms at play. First, since many high income earners have the ability to choose when and how they're paid, they will use this ability to avoid subjecting the money they're really making to the U.S.' personal income taxes. It might still be taxed by other means, but it will be at more favorable tax rates, which leads to the second mechanism.

With higher marginal personal income tax rates in the offing, large numbers of individuals who will be subject to these tax rates will alter their behavior - they will throttle back their efforts since they will no longer reap as great a reward for doing so.

That latter driver behind shifting the distribution of income will have real economic consequences, including a U.S. economy that grows at rates far less than its potential.

It's just not a good idea. Politicians looking to reap drastically more tax money to support their insatiable lust for power and ambitious spending programs through higher personal income taxes will be thwarted by millions of people seeking to simply keep what they believe is a fairer share of what they earn.