Once again, we've updated our signature tool The S&P 500 at Your Fingertips, with all the latest available data through June 2008. The chart below, which we've tweaked a bit from the version we showed late last week, shows where we're at and where things sit here at the midpoint of July: 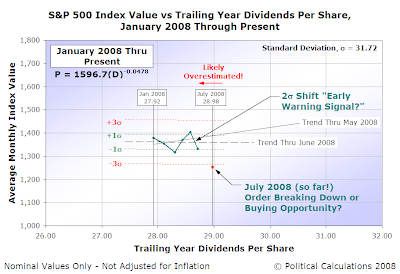 Elsewhere, Tigerhawk has asked if the recent market action is a reaction by investors discounting the possibility of a likely Obama presidency (HT: Instapundit). The answer to that question is no, at least not yet. The trigger behind sharp market declines is, almost invariably, the risk of financially-distressed companies cutting their dividends to improve their balance sheets. Since changes in expected dividend payments in the future directly drive stock prices, when investors can reasonably expect that this will happen, stock prices anticipate this action by sinking lower.

How important are dividends to establishing the value of stocks? Consider this: even though the stock market initially rallied when the price of oil unexpectedly dropped by $6.44 per barrel to close at $138.74 on the news that President Bush rescinded an executive order prohibiting drilling on the U.S. portion of the North American outer continental shelf yesterday, stocks still managed to sink as investors are still uncertain as to when and how much a number of companies (see below) will be taking actions to cut their dividends.

The Action Through June 2008

In moving from May to June 2008, stock prices declined sharply with respect to their underlying dividends per share, suggesting a period of increased distress was approaching. Standard and Poor's Howard Silverblatt, writing in the June 2008 S&P 500 MarketAttributes Snapshot (generic link here - we're not aware of a permanent link), noted the developing situation:

As concern over earnings reemerged, so did concern over dividends. June’s dividend increases picked up, but the month also included decreases by FITB and DividendAristocrat KEY. Year-to-date, there have been 20 dividend decreases with 17 being in the Financials. For the month, 16 issues increased, none initiated, 2 decreased and 0 suspensions, versus 12 increases, 0 initiations, 1 decrease, 0 suspensions for the same period in 2007 and 17 increases, 0 initiations, 0 decreases, 0 suspensions for May 2006. Year-to-date, increases are down 161 versus 167 for 2007, with decreases up 20 versus 4 in 2007.

Still S&P has not altered their forecast for the S&P 500's trailing year dividends per share for 2008, which they still anticipate will be $30.30. We would however anticipate the level of dividends for 2008 will come in below this figure, as a number of large companies in the financial sector will likely be cutting their dividends to help improve their balance sheets in the very near future, much as General Motors did yesterday.

The following table illustrates the ten most likely candidates for the dividend chopping block (with GM included for reference), ranked according to their dividend yield given the values of their individual stocks and their estimated dividend payments per share for the next year as of 15 July 2008:

Until the erosion in dividends ends, we're afraid that the S&P 500 and other major stock indices will not be going up anytime soon. We would anticipate that the carnage in the market will continue until the powerhouse financials dragging the indices down get serious about building up their balance sheets and pull the trigger on dividend cuts. Then, and only then, will investors regain confidence in these companies.