When it comes to the employment prospects for U.S. teenagers in the current economy, the effect of increasing the federal minimum wage is rather like throwing a switch. All it would seem to take for the government to throw hundreds of thousands of those Age 16 to 19 out of work is a 70 cent per hour increase in the legislated minimum pay rate!

We've previously looked at how the most recent cycle of increasing unemployment rates has coincided with significant increases in the U.S. federal minimum wage, finding that the minimum wage hikes are disproportionately affecting teenage workers. Teenagers, it would seem, have borne the greatest burden of the increased level of unemployment in the U.S. as they make up such a large share of workers paid at the lowest levels.

Since we previously only considered the situation through the end of 2007, we thought it might be interesting to see what we would find if we ran some back-of-the-envelope numbers using data from the latest Employment Situation report. 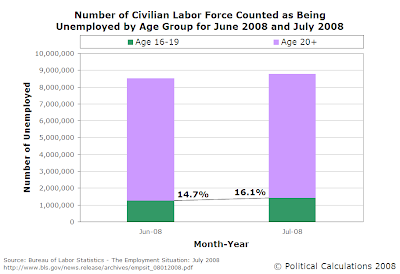 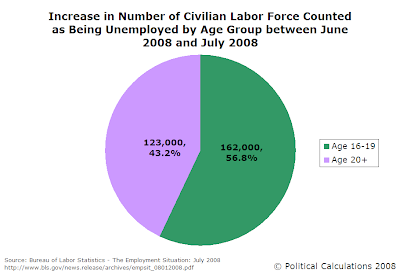 What's amazing is that this report only covers one week of the latest minimum wage hike! One wonders what August will bring for the teen unemployment numbers!...