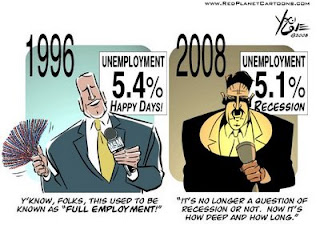 Earlier this year, the mainstream media added anywhere from 10 to 20% to the public's heightened perception that the United States would find itself in recession in 2008.

Really! And we can thank prediction markets for helping to answer the question of how much does subjective economic reporting and commentary influence the public's perception of the U.S.' economic health.

Here's how we know. Because the probabilities generated by prediction markets rely primarily upon the information available to those who participate in the markets, which really are a kind of betting pool organized around the likelihood of certain events coming to pass, what they really measure is the degree to which those participants expect a certain event will occur based upon the most current and prevailing information available to them.

In the case of the likelihood of an economic recession, we can safely assume that virtually all of the information available to prediction market participants is that compiled, disseminated and echoed by the various organs and members of the mainstream media.

As a result, we can measure the impact that those who deliver the information have upon the perceptions of the market participants that a given event will occur. We can do this by comparing the probability of the event occurring that is determined by the prediction market against other predictive methods that are not similarly influenced by the mass media's subjective reporting and commentary.

In essence, it all boils down to a subtraction problem. The measure of the media's influence is the difference between the prediction market's media bias-influenced probability and an objectively-determined probability that the given event will take place.

For objectively determining the probability of recession in the United States, one method we might use for comparison is a predictive method developed by economist Jonathan Wright of the Federal Reserve Board. Known as Wright Model B, this method uses the impartial data of the calculated spread in the bond yield curve for the 10 Year and 3 Month U.S. Treasuries along with the Federal Funds Rate to anticipate the likelihood of a U.S. recession some twelve months in advance.

Here's our side by side comparison of the data. First, here's the lifetime history of Intrade.com's 2008 Recession Prediction Market (HT: Mark Perry):

Now, here's the history of the probability of a U.S. recession as determined by Wright's Model B method: 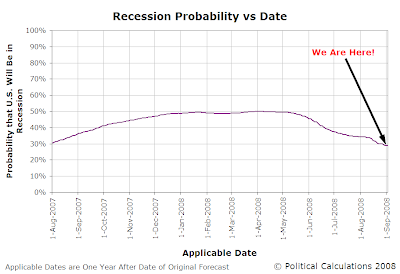 Update 4 September 2008: The next chart shows the difference between the probability of recession as determined by each approach: 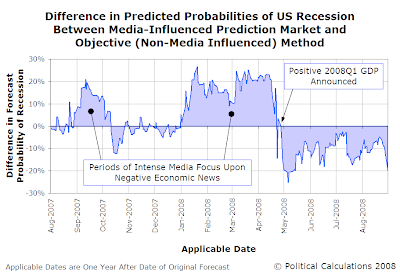 We see that the probabilities for each start out close to the same, around 30%, but then as negative economic reporting and commentary in the mass media began to kick into gear in September 2007, we see that the prediction market's participants reacted by sharply increasing their expectation of recession by roughly a 20% margin over the objectively determined probability.

That increase in the prediction market probability level was followed by a brief dip in October 2007 as positive news related to corporate earnings in the third quarter of 2007 was released that also indicated that U.S. companies would do well through the end of 2007. The prediction market shortly resumed tracking along with the increasing objective probability of recession, which was building to the mid-to-upper 40% range at the time.

Those levels continued until January 2008 when U.S. companies, especially banks, mortgage lenders and other financial companies, began warning that their future earnings would be distressed. Negative media reports and commentaries on U.S. economic conditions grew exponentially, sending Intrade's 2008 U.S. recession prediction market soaring to the 70% level, even as the impartial and objectively determined probability of recession was flattening out just under the 50% level.

From January through April 2008, we can see that the media's continuously negative economic reporting and commentary throughout this period contributed anywhere from 10-20% to the prediction market participants' heightened perception that a recession was likely.

Toward the end of April, the failure of the economy to drastically worsen (driven by better than anticipated economic and financial news), led the prediction market's participants to sharply deflate their expectations of recession. Here, the probability of recession anticipated by both prediction market and impartial forecasting method declined rapidly from 50% through the 40% level and back to the 30% level.

In fact, we see that the probability of recession communicated by Intrade's prediction market now is well below that determined using the objective method. That decline below the objectively determined level of probability is likely due to how the prediction market is set up, in that it requires two consecutive quarters of negative GDP growth in 2008 for a positive affirmation, which is now highly unlikely to occur.

And so we find a new way, other than their designed purpose, in which prediction markets might provide useful insights!

Investor's Business Daily featured a series of articles in 2007 examining how biased reporting by the media, when combined with incompetence in explaining how markets and the economy work, seriously skews the public's perception of both.