We thought we were breaking news yesterday, but it turns out that S&P had already stealthily announced that they were going to slash their indicated dividend payment for the S&P 500 back on 24 July 2008, which perhaps helps account for a good portion of the dropoffs we saw in the market at that time. It would have been nice if they had thought to include the press release announcing the revision in their outlook for the year on their site where one should expect to find it, but let's begin this post by taking a closer look at their basic announcement:

The $7.62 quarterly dividend per share figure for 2008Q4 may be at risk. S&P analyst Howard Silverblatt explains:

"Already this year, 20 Financials have decreased their dividend payments compared to just 12 over the past five years," says Howard Silverblatt, Senior Index Analyst at Standard & Poor's. "As a result, the 4% expected increase in S&P 500 dividend payments for 2008 will be the lowest growth rate since 2002 when payments were up 2.1%."

Standard & Poor's data also shows that despite the cuts, Financials continue to contribute the lion's share of dividends. "While the Financials sector makes up 15.7% of the market, it contributes 25.5% of the dividends," notes Silverblatt.

Since financial companies represent the bulk of distressed firms in the stock market, their relatively outsized contribution to the index' overall dividend payments may result in further substantial reductions in expected dividend payments should these companies' business conditions continue to deteriorate. Investors may already be anticipating that occurring, which we are seeing now as stock price declines.

Using S&P's revised indicated dividend payment for 2008, and combining it with the dividend rate as determined by indexArb's dividend futures as of 7 October 2008 for future quarters, we can project when the overall level of distress in the stock market will peak. As we've previously noted, market distress peaks often coincide with stock market bottoms and occur when the trailing year compound annual growth rate of dividends per share near a value of zero: 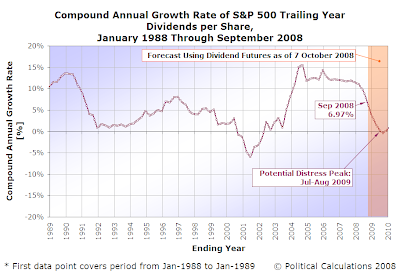 Using this data, we would anticipate that without further cuts in expected dividend payments that the peak of distress in the stock market will occur in July-August 2009. Should dividend payments come in below expected figures, that result would lead to the peak of distress arriving sooner. This would not necessarily be a bad thing if that meant that the distressed companies within the S&P 500 were going to be on a stronger footing going forward. That remains to be seen.

Speaking of which, here is the chart of the price-dividend growth ratio, the ratio of the trailing year compound annual growth rates of stock prices to dividends per share, for the period from January 1988 through September 2008: 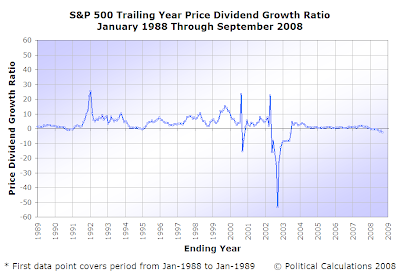 We see that distress is building, as represented by the latest calculated datapoints beginning to move sharply away from the horizontal axis. The negative value tells us that either the trailing year growth rates of stock prices or dividends per share are negative (in this case, the growth rate of stock prices has been negative.)

Be sure to see our chart from this post showing the relationship between distress peaks and market bottoms! As a final note, we should recognize that there may be some issues in blending S&P's forecast and indexArb's dividend futures as we did in our analysis. Most of any error would appear in the transition between 2008Q4 and 2009Q1, the remainder would be due to differences in the time periods covered by indexArb's futures data and S&P's actual quarterly data, which do not fully coincide.

Update 9 October 2008: We've made a correction to the post above. Our thanks to Kurt Brouwer of the Fundmastery blog for catching a key typo in the text of our post, in which we had identified the potential peak of distress in the stock market as occurring in July-August 2008 instead of July-August 2009.