New information has surfaced that forces us to change our estimation of the value of the so-called "Rezko Lot," the vacant lot immediately adjacent to Senator Barack Obama's primary residence in Kenwood, Illinois.

We had previously found that the growth in the value of parts and whole of the Rezko lot grew over time from August 2000 through December 2006 in almost perfect synchronization with the average growth rate of real estate for the entire city of Chicago, as recorded for each quarter spanning the period of the various transactions involved by the Office of Housing Enterprise Oversight (OFHEO). The chart below summarizes our previous findings: 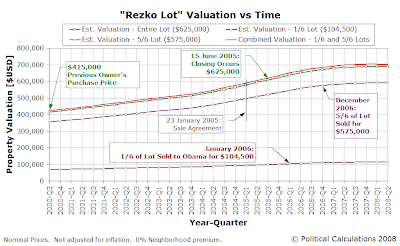 It would now appear that the near-perfect synchronization of the valuations of the parts and whole of the Rezko Lot that we had previously observed is too perfect.

We base that statement upon the recent publication of the values determined by professional appraisals performed in November 2005, prior to when Senator Barack Obama purchased one-sixth of the "Rezko Lot." The remaining five-sixths of the lot was sold in December 2006 to a developer-acquaintance of Antoin "Tony" Rezko. Newsweek's Michael Isikoff reports on the property's appraisals determined in November 2005, which surfaced in the legal case of an appraiser against his former employer:

In the lawsuit, filed in Cook County Circuit Court last week, Conner claims that he was asked to review the bank's appraisal of the property purchased by Rezko after the bank learned that he was selling a slice of it to Obama. Conner says he concluded that the bank's appraisal of the property was "overvalued" by $125,000 and that, based on comparable prices of nearby properties, the vacant lot that the Rezkos paid $625,000 for was worth no more than $500,000. To back up his own conclusion, he included as an exhibit an appraisal that Obama paid for in November 2005, which assessed Rezko's property to be worth $490,860—about the same as Conner's assessment and also far less than Rezko and his wife paid for it. The president of Mutual, Amrish Mahajan, personally approved the loan to Rezko's wife and had an "established relationship" with Rezko, according to the lawsuit.

We now have an assessment of the value of the property determined independently of both Barack Obama's and Tony Rezko's transactions, which sets the value of the entire Rezko lot at $490,895 in November 2005, or for our analytical purposes, the fourth quarter of 2005 (2005-Q4). Combined with the previous owner's purchase price for the property of $415,000 in August 2000, we can now precisely determine how the prices of real estate in Barack Obama's neighborhood had to have changed over time with respect to the average rate of change of real estate in Chicago to be valued at these levels. Our new findings are presented in the chart below: 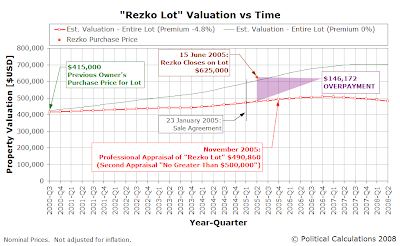 We can now confirm that real estate properties in Barack Obama's neighborhood appreciated at an annualized rate some 4.8% below the average rate of appreciation for the entire Chicago metropolitan area between August 2000 and November 2005. What's more, we can now determine that the recorded purchase price exceeded the actual value of the property by $146,172 at the time the property transaction was closed on 15 June 2005, with a purchase price of $625,000.

We've modified our companion tool for tracking the values of real estate properties in Chicago over time to reflect this negative neighborhood "premium":

It would appear that Senator Barack Obama doesn't live in such a hot neighborhood, as it would appear to significantly drag behind the typical growth rate of real estate values in Chicagoland. Even worse, the original purchase price of his current residence now appears even more bizarrely overvalued itself.

That's not the only evidence we have that Barack Obama's home is located within a neighborhood that seriously lags behind that of adjacent neighborhoods and the city of Chicago at large. As we noted in our previous look at these transactions (emphasis ours):

It occurred to us at this point that these rates of housing appreciation would represent the average rates at which real estate prices changed in Chicago during this period. Since Chicago is large enough to feature local hot and cold spots within its total real estate market, it made sense to attempt to establish if the neighborhood in which these properties are might carry a premium rate of appreciation, on top of the Chicago real estate market average. 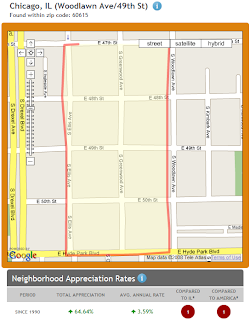 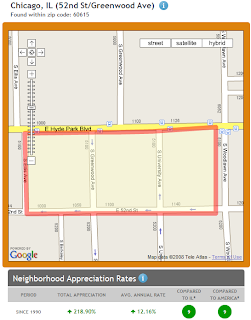 For that data, we turned to NeighborhoodScout.com. The properties both fall in the south edge of the area identified as the Woodlawn Ave/49th St neighborhood, in which properties have appreciated at an annualized rate of 3.59% since 1990, well below the average for Chicago.

Using our tool for finding the annualized growth rates and percentage changes of values over time to find out if that latter proposition is indeed the case, we find that over the period spanning the transactions involving the Rezko lot, it appreciated at an annualized rate of 3.30%. It would then appear that there is no special premium one gains by living in Senator Barack Obama's neighborhood in terms of real estate appreciation - in fact, it would appear to be a huge bargain for everyone who lives there but the 2008 Democratic party presidential nominee himself (not to mention his close associates.)

Which perhaps explains why more recent attempts to sell the remaining five-sixths portion of the old Rezko lot have failed, given that the seller, former Rezko associate and attorney Michael Sreenan (also a significant Obama political campaign donor), has been asking $1.5 million for it. By our back of the envelope math, that's over $1.0 million more than it's worth today.

As always, you're welcome to check our numbers yourself! Our Chicago-area valuation tool is above, our tool for finding annualized growth rates and percentage changes over time is below....