The call came shortly before midnight, waking the Economic Detective.

"I'll get on it," said the Economic Detective, as the line clicked to disconnect.

It had been a while since the Economic Detective had closed the books on the case of what killed so many jobs for teens in 2007. He'd found that the Public Policy Gang was behind the massive teen job kill, but more than that, their fingerprints were all over the disappearance of nearly one million jobs from the U.S. economy that year.

But they were still out there. Still sticking their power-hungry hands into every place where they thought they might get even more for themselves, no matter the cost to anyone else. How many teen jobs might have gotten whacked in 2008 because of their schemes? That's why the Economic Detective now rose out of bed to go to work, because the Data Jocks at the BLS had finally accounted for all the minimum wage jobs in the U.S. for that year. 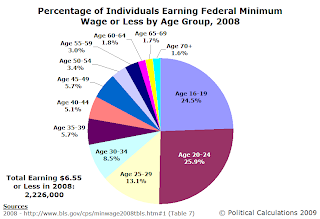 Sure enough, it was true again. The number of U.S. minimum wage earners had increased to 2,226,000 in 2008. The Economic Detective took the BLS data and broke down that figure by age group. 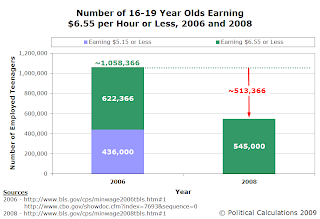 But how does that compare to the number of teens earning $6.55 or less from before the minimum wage began being increased? To find out, the Economic Detective went back to his tool that modeled the distribution of hourly wage earners in the U.S. for 2005, which turned out to be remarkably accurate for 2006. Here, he found that in 2006, there were approximately some 1,058,366 teens employed at the level to where the minimum wage had been set in 2008. Taking the difference with the 545,000 teens actually counted as earning that level or less in 2008, that's some 513,366 jobs that have disappeared from the U.S. economy. Subtracting out the 261,717 teen jobs that disappeared between 2006 and 2007, that meant that between 2007 and 2008, some 251,649 additional teen jobs were now missing.

513,366 minimum wage jobs for teens is a lot to disappear over a two year period for a group that's dropped from 4.3% of the U.S. workforce to just 3.6% today. The Economic Detective wondered how many of the jobs for teens that disappeared betwene 2006 and 2008 might be accounted for by the disappearance of jobs paying the federal minimum wage of $6.55 per hour. The following chart gives the change in the average number of teens for each year from 2006 through 2008: 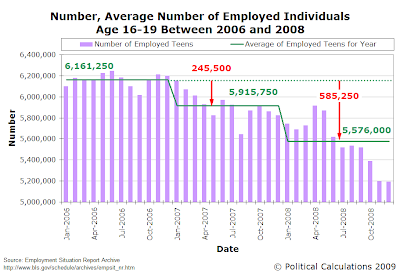 "At least," mused the Economic Detective, "the kids at the very bottom of the U.S. workforce aren't completely alone in taking the brunt of job losses in the U.S. anymore. Misery certainly loves company...."

The phone rang again. "The numbers are looking pretty brutal," said Doc. "There's so many more kids out there who aren't getting that entry level work experience that'll pay off for them as they get older. Not to mention the reality check on life that comes with that first job.

"But did you ever wonder what happens to the people at the places where these jobs aren't anymore? The ones left behind but still working? Think about that for a while." And once more, Doc hung up on the Economic Detective.

"Great," said the Economic Detective to the man on the phone who wasn't there anymore, before putting any more thinking on hold for the night and going back to bed.

The Economic Detective series actually began as a fun way for us to revisit and re-create a lot of data and analysis we had done, but lost nearly a year ago. Here is the ongoing saga as it stands today: