Political Calculations
Unexpectedly Intriguing!
18 May 2009
Building from an Old Base? 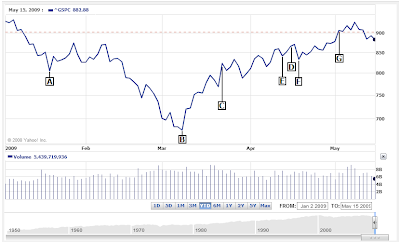 At present, it appears that we won't hit our average target range of 925 to 945 for the S&P 500 in May 2009, despite having come very close to moving into that range on 8 May 2009. What we find interesting about that is that stock prices, instead of tracking that more recent forecast would instead appear to be pacing an older forecast we had projected for stock prices through the second quarter of 2009.

So what happened? Why would stock prices nearly rise to our newer forecast level, then fall to a level that would be consistent with an earlier projection?

It will take a while to see which alternative will more closely agree with how stock prices will change in through the end of the current quarter. If the first option holds, then we might expect stock prices to generally rise on a fairly steady track until investors shift their focus from the future point in time they appear to currently be holding fixed.

If the second option holds, then it's entirely possible that with the absence of further negative news affecting what investors expect for the future level of dividends per share, stock prices could well surge, rising rapidly in a very short period of time, should investors reset the stock price base from which they project future stock prices back to where they would appear to have in early May.

That said, we do not anticipate that stock prices will rise enough by the end of the May 2009 to reach the target level we had specifically forecast for the month, so we're going to score this forecast as a miss (our first for 2009!)

Where does this put us in terms of our Plus-Minus statistic for 2009? Here's our track record through this point of the year (the letters correlate with those in the chart of stock prices at the top of this post!):

Update 4:25 PM PDT: Added "should investors reset the stock price base from which they project future stock prices back to where they would appear to have in early May" to the eighth paragraph. We accidentally omitted this section from our original post.