Political Calculations
Unexpectedly Intriguing!
14 May 2009
What Investors Are Really Expecting

"It looks to me now as if the markets are now pricing in a rapid recovery, that they’re pricing in a V-shaped recession, which I consider extremely unlikely," Krugman, 56, said at a forum in Shanghai today. "The market seems to be looking as if this is going to be an average recession, but it’s not."

What makes this comment so strange is that it has no basis in fact. As it happens, we can show you exactly what investors have been, and are now, expecting for the economy since the stock market recently bottomed on 9 March 2009 before beginning to rally. The chart to the right shows the expected level of trailing year dividends per share for the S&P 500, which we've calculated using historic data from Standard and Poor, dividend futures data from IndexArb, as well as our rough estimate of the current quarter's trailing twelve months dividends per share, which we've held constant from the final projection that IndexArb's dividend futures provided for 2009Q2 before the 2009Q1 dividend futures contract expired. 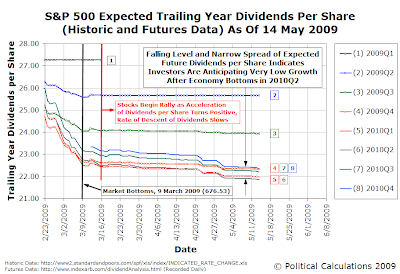 Picking up the action two weeks before the market reached bottom, we see that expected dividend levels were plunging rapidly as several major companies were announcing dividend cuts going forward during this period. This declining outlook is the principal reason stock prices were falling during this period of time. We also see that the 2009Q4 forecast dividend data is the lowest on the chart (labeled #4) - this indicates that back on 23 February 2009, investors were expecting the fourth quarter of 2009 to mark the bottom of the current recession.

Meanwhile, we see that the data for 2010Q1, 2010Q2 and 2010Q3 were each progressively higher in value above that for 2009Q4 at this time. What this indicates is that investors were anticipating something like a V-shaped recovery in the economy, expecting that each quarter's dividends would grow progressively higher in value as the economy strengthened after hitting bottom.

That is what investors believed would happen with the economy while stock prices were falling. What happened next, as stocks bottomed and began rising in value, tells a very different story than that now being put forward by Krugman.

In the week that followed the market reaching bottom, the rate of decline in dividend prices suddenly slowed, then slowed further. What happened during this time is that investors shifted their focus from the announcements of large dividend cuts being made during the first quarter of 2009, focusing their attention instead upon where they expected stock dividends would be at the end of the year. The dividend futures that apply to this period are those for 2010Q1, since the dividend futures for 2009Q4 expire on 20 December 2009, before the year ends.

At this point in time, we see that investors now anticipated that 2010Q1 would mark the bottom of the recession. What's more, we see that they expected that growth would be slow in 2010Q2, but would pick up steam in 2010Q3 and 2010Q4, as the forecast level of dividends per share were progressively above the level for 2010Q2.

Tracking forward to today, we see that as time has gone by, the level of future expected dividends per share has declined. What's more, we see that the spread between quarters has narrowed considerably. This combination of changes indicates that investors absolutely do not expect a V-shaped recovery in the economy. What the data indicates is that investors are now expecting that 2010Q2 will mark the bottom of the recession, but that the recovery from that point will be very slow, with little economic growth to power dividend levels much higher in future quarters.

The data reveals that this outlook is little different from what investors have expected throughout the entire stock rally since 9 March 2009. If anything, investors have become more pessimistic on the state of the U.S. economy throughout this period of time.

What's also important to note here is that what has powered stock prices higher in the rally following the market bottom of 9 March 2009 is not their expectation that the economy will have a strong recovery, it is instead that the rate at which the economy is getting worse has been slowing, the result of the acceleration of the expected future rate of growth of dividends per share becoming positive. It is this positive acceleration of the expected future growth rate of dividends per share that is behind the rally in stock prices that we've observed since 9 March 2009.

And that rally will resume, absent any news that would significantly alter what investors currently believe will be the future level of dividends per share in the stock market.

Then again, perhaps Krugman is simply not up to date on what investors expect, perhaps being distracted by having to concede his imputed wager with Mankiw....

Update 15 May 2009: We started thinking about this a bit after we posted, but what kind of picture might investors see by looking at the quarterly dividend futures data? We went back to our source data and extracted the following (the data is that for the S&P 500 through 14 May 2009).

While the trailing year dividend per share data suggests an overall bottom in 2010Q2, the quarterly data indicates a recovery in corporate earnings starting from a bottom in 2009Q3 and going through both 2009Q4 and 2010Q1.

Though followed by a one-quarter dip in 2010Q2, if one takes two consecutive quarters of growth as an indication signalling the end of a recession, it might be pretty likely that the NBER will identify a month in 2009Q3 as representing the end of the current recession.

What this analysis doesn't change is that investors would still appear to be anticipating a very lackluster period of very low growth after the economy bottoms.