A lot of economists are now saying that the current recession in the U.S. will have ended within the months of July, August or September of 2009. The Wall Street Journal reports the findings of its survey of 47 economists:

After months of uncertainty, economists are finally seeing a break in the clouds. Forecasts were revised upward for every period, with 27 economists saying the recession had ended and 11 seeing a trough this month or next. Gross domestic product in the third quarter is now expected to show 2.4% growth at a seasonally adjusted annual rate amid signs of life in the manufacturing sector, partly spurred by inventory adjustments and strong demand for the "cash for clunkers" car-rebate program.

Our question: did we really need 47 economists to come to this conclusion? 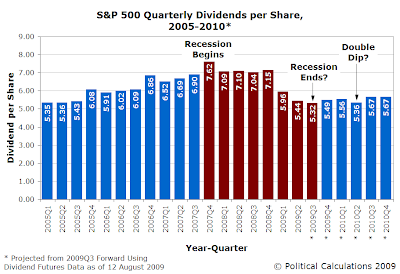 Here's the thing. Regular visitors to Political Calculations know that we pay a lot of attention to the dividend futures data for the S&P 500, which we find invaluable for describing how investors expect the future of the U.S. economy will play out, for the simple reason that we should reasonably expect dividend payments to rise in a good economic climate and to fall in a bad one, as the companies that pay them are affected by the state of the economy.

Literally for months now, since mid-April, the quarterly dividend data for the S&P 500 index has indicated that investors have been expecting that these projected future payments to shareholders would bottom in the third quarter of 2009, and be largely flat through the end of 2010 ("leveling off", to borrow a phrase from the Fed.)

That's significant because the current recession began as quarterly dividends per share peaked in the fourth quarter of 2007, when the current recession was declared to have begun by the National Bureau of Economic Research, the "official" arbiters for determining when recessions begin and end in the United States.

Given the way recessions are defined, with a recession beginning at the previous peak of expansion in the economy and ending at a trough in the economic business cycle, that means that the S&P 500's quarterly dividends per share data might be able to be successfully used to identify the fiscal quarters for when a recession both begins and ends. Or for when the economy might "unexpectedly" dip into distressed territory, as hinted at by the most recent dividend futures data for 2010Q2 in our chart above.

So, what did we need those 47 surveyed economists for? To point to the government's "Cash for Clunkers" program? The same program that didn't even exist as potential legislation until 8 June 2009? A month and a half after the market began steadily indicating that 2009Q3 would very likely mark the bottom for the recession?

If nothing else, that focus does suggest another more useful line of work for at least 47 economists....

Update: One things for certain - the WSJ sure didn't survey Bill Polley!