The news is out for the latest business quarter, and it's bad. The company's performance fell well short of expectations. What price is likely to be paid by the company's chief executive and financial officers?

If a recent working paper by Harvard Business School's Richard D. Mergenthaler, Shiva Rajgopal and Suraj Srinivasan is any indication, there will be a significant hit taken by the company's top brass, and maybe even some heads that roll (HT: Leon Gettler). In CEO and CFO Career Penalties to Missing Quarterly Analysts Forecasts, the authors document what happened to the earnings or the employment status of the CEOs and CFOs of companies whose quarterly financial statements fell outside the consensus forecast of industry analysts in the years from 1993 through 2004. 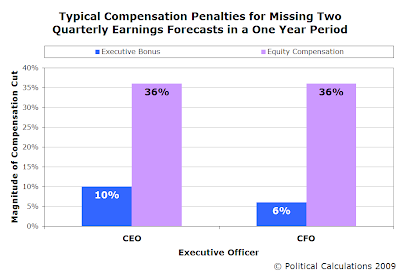 What they found is that is that compared to companies whose quarterly performance came in as expected, the CEOs and CFOs of companies that failed to meet the consensus earnings projections twice in a year's time saw their pay significantly whacked and had a sharply higher likelihood of being forced out from their positions. In terms of pay, CFOs in this situation were most likely to see their bonuses cut by 6% of their salary and their equity compensation slashed by 36%. CEOs saw the same cut in their equity compensation, but took a bigger hit in their bonus packages, which were typically trimmed by 10% of their salary. Meanwhile, both CEOs and CFOs realized a 0.67% higher chance of being sacked. 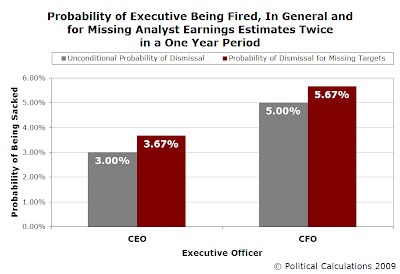 To put that in a little different context, the odds that a CEO will be sacked rises from 1 in 33 to 1 in 27, while CFO sees the odds of being fired increase from 1 in 20 to 1 in 18. It's a small, but significant change, one that affects how executives act.

From the observations made in this paper, it would seem that the challenge for CEOs and CFOs seeking maximum financial rewards while securing their positions is to do what it takes to hit the analyst estimates their corporate boards use in assessing their performance, while also doing what it takes to make sure those analyst estimates are things they can hit. We would then anticipate that most CEOs and CFOs would adopt a strategy that would tend to understate their actual performance, which would steer analyst projections lower and create easier targets to hit. 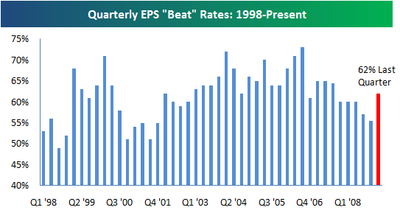 Lo and behold, we would appear to be right (HT: Bespoke)!

With the Sarbanes-Oxley Act having been enacted in 2002, we observe that the percentage of companies that "beat" their analyst earnings estimates has been consistently higher since the legislation was first introduced in the U.S. House of Representatives in January 2002 (the bill became law on 30 June 2002, at the end of the second quarter of that year). This effect is consistent with our own observations in other matters that suggest that firms begin altering their behaviors and strategies in reaction to legislation that has a high likelihood of passage well before it becomes law.

We'll leave it as an exercise to our readers to determine how trustworthy the CEOs and CFOs who consistently understate their projected earnings performance might be and how long it might be before all firms are above average in this regard....