Today, on "Backwards in Time" Stock Market Theater, we're showing our latest classic feature, the S&P 500's Average Monthly Index Value vs Trailing Year Dividends per Share, which was originally screened before a captive live audience from August 1949 through June 1954. 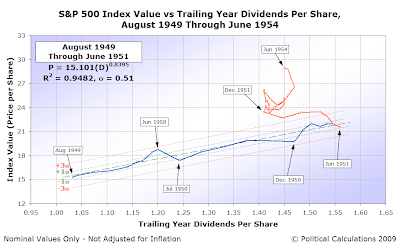 In this episode, we see an orderly market emerge in August 1949, in which everything seemed to be pretty normal until June 1951. But while comparatively short with respect to other periods of apparent normality that we've previously featured, this period also features the almost signature early warning signals of a pending breakdown in order that we've seen at work in both the 1960s and in the 2000s: a two-standard deviation negative shift in the value of stock prices, occurring within 1-2 month time frame.

The first occurs between June and July 1950, which sets up the elongated second early warning alert between October 1950 and December 1950. 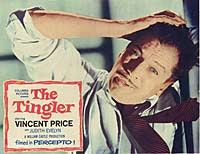 We have to say, that was quite the thrill ride! It's not often you see stock prices going up while their underlying dividends per share are falling, which means that investors during this period had to be hanging on the edge of their seats while experiencing a total adrenaline rush. And not just from "The Tingler"! Who ever said the 1950s were dull and boring?