Political Calculations
Unexpectedly Intriguing!
September 30, 2009
The Fork in the Road 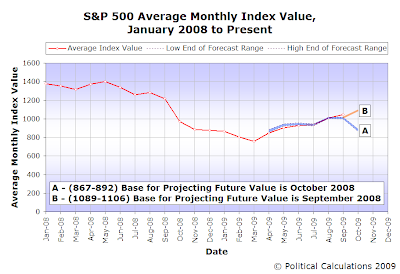 How much does the base value for projecting the future value of stock prices matter?

That's the question we're asking this morning as we consider where the S&P 500 might go in October 2009. Throughout most of this year, stock prices have more or less paced the "blue track" shown in the chart to the right, which represents the lower half of our full forecast range [1], as determined by our math. 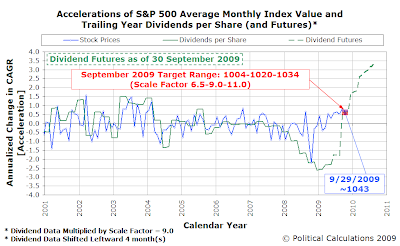 But now, we wonder if investors might look at how far stock prices dropped in October 2008 and say: "that's not a realistic base from which to project today's stock prices." After all, the period from late September 2008 through October 2008 marked the beginning of the meltdown in the financials, which represented a very large part of the market capitalization of the S&P 500.

So we created an alternate track - one that resets the base for projecting future stock prices to September 2008, which appears to have been close to being on target for where stock prices will have gone in September 2009 [2], with respect to our full typical forecast range.

And we'll find out at the end of October is our fork in the road has taken stock prices to Door A, Door B, or some other door altogether.

Unless the stock market decides to take Yogi Berra's directions [3]....

[1] Our full target range is generally based on an amplification factor of 7.0 for the low end and 11.0 for the high end, which is consistent with our observations of the degree to which changes in the future expected growth rate of the S&P 500's trailing year dividends per share drive changes in the growth rate of stock prices since 2001. An amplification factor of 9.0 coincides with the middle of the full target range. Beginning in September 2009, we lowered the amplification factor we use for the low end of our forecasting to 6.5, as a more direct method of accounting for the slow erosion we've observed in the growth rate of dividends throughout this year - prior to that change, we would simply round the calculated boundaries of our forecast range to the nearest whole multiple of "5".

[2] We were off target on our original forecast for September 2009, as we initially anticipated that the period from 10 September through 16 September would be one in which stock prices would fall. Fortunately for our plus/minus score, we dug into the numbers and realized that stock prices would instead soar above our originally predicted range, a finding we incorporated into our September forecast post as an update on 10 September. We'll be updating our plus-minus score for predictions in mid-October.

[3] Yogi directions are: "When you come to a fork in the road, take it." The story behind Yogi's quote from Wikiquote:

Berra says this is part of driving directions to his house in Montclair, New Jersey. There is a fork in the road, and whichever way you take, you will get to his house.