In June, we entered PJTV's Generational Theft contest. In August, we had made the first cut and went into the second round of judging. Yesterday, PJTV announced the winners: Hartford, Connecticut-based Trinity College's senior Gavin Romm and professor Edward Stringham.

From what we know from the contest administrators, our entry came in second place overall.

But we don't feel bad about that! Here is the spreadsheet they created, here are sample screen shots of their basic results and here is PJTV's Allen Barton's video interview of the contest winners (click the image to access PJTV's web video): 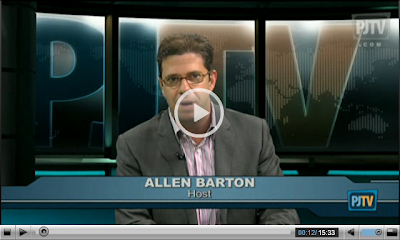 From the interview, we believe we can tell where our entry likely fell short in the final point count: we simplified the user input too far.

Here, in creating our web-based tool, we took all the different stimulus and bailout-driven debts the government has taken on since 2008 and condensed it into a single figure, while also embedding it directly in our tool's programming code for the sake of keeping the user interface very simple. This approach, combined with our analysis, allowed us to simplify the data entry portion of our tool to just two elements: a 2009 college graduate's starting income and a year for which to project the personal impact of all the government's massive new spending.

While that's an advantage for a web-based tool, this approach de-emphasizes the individual components of that debt, which we believe became a deciding factor in the contest judges criteria for the winning entry. Contest winners Romm and Stringham's Excel spreadsheet, makes each of these components more visible, although with the trade off of greater complexity. Plus, the choice of using Excel allows for graphs to be part of their tool's output, which we think also gave Romm and Stringham an edge in the judging.

For their efforts, Romm and Stringham have each won $10,000, to which we say: Congratulations!