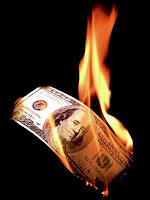 Today, we're celebrating our fifth anniversary as we have in previous years by sharing the most amazing discovery we've made in the past year. Unlike the previous three years, in which we put the entire history of the S&P 500 at Your Fingertips, uncovered the basic fundamental relationship of the stock market and revealed how changes in investor expectations directly drive stock prices, today's post has nothing to do with the stock market.

Sounds pretty mundane, right? After all, politicians are always tweaking this or adjusting that in the U.S. tax code, which goes a long way to explaining why it has grown over time to be over 3.7 million words long.

But what politicians don't do very often is change the marginal tax rates that apply to individual income earners in the United States.

The reason why is pretty straightforward. These tax rates are the most visible part of the U.S. tax code. Unless politicians are taking the popular step of reducing them, they try to avoid making any changes in these rates. In the case of increasing the tax rates significantly, they will most often do so only when they have a strong consensus, say in the historical case of a declared war or other crisis, or when the political party in power has a large majority in the U.S. Congress and can achieve its aims without bipartisan compromise.

What we end up with then is a system where tax rate changes most often occur at the margins. The two questions that arise from that observation are "what are those margins" and "where are they"?

We know that once elected, politicians seek to retain the power of their office by putting money in their supporters' pockets. That happens in two ways: by spending the money that it borrows and that it collects through taxes to benefit their supporters or by reducing the amount of taxes their supporters have to pay.

These two things obviously contradict each other, but the balance and conflict that exists between them explains quite a bit. Politicians risk alienating supporters if they raise taxes too high to support the spending they believe will keep them in office, so they will seek to keep spending high and taxes low by borrowing the money needed to make up the difference between what the government collects and what the politicians want to spend.

The problem with that strategy is that if the amount of borrowing continually grows faster than the government's tax collections, it sets up the situation where tax rates must be raised to support the spending initiatives of the politicians. The politicians can get away with this for short periods of time, but once the level of debt grows too high, the people the politicians borrow money from will require taxes be raised as a condition of continuing to do business. In other words, the politicians put the government into a position similar to that of a distressed business nearing failure, where the business must do the things their creditors dictate, especially if they wish to keep borrowing money to keep in control of the business.

No, that's not healthy. Unlike a failing business however, the government has the power of being a monopoly, one that can force people into doing business with it. Or in this case, one that can compel people to pay more for it without having to deliver more or better benefits.

All these factors are represented in what we define as the national debt burden per capita. This is the ratio of the national debt to national income (also called gross domestic product, or GDP), divided by the total population. This result is then multiplied by a scale factor. We use a scale factor of one billion, which makes the resulting figures a lot friendlier to deal with. 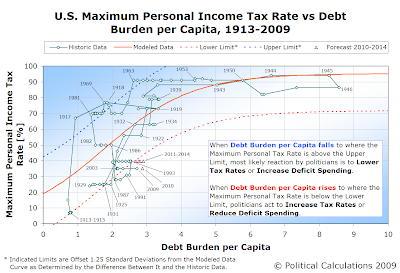 Now that we've identified the things that define the margins for where politicians operate, we can now see how those things affect where they set tax rates. To do that, we've plotted the maximum income tax rate since 1913 against the debt burden per capita we've calculated for each year since. We used Zunzun's 2-D function finder to perform a regression analysis of the data, which is represented by the curve passing through the center of the data points.

What we find is remarkable, in that we see that once the data falls outside these margins, politicians act within a relatively short period of time to pull back within them.

How they choose to do that varies by circumstance. Going chronologically, here's what we observe:

Using the White House's Office of Management and Budget's forecast for each year from 2010 to 2014 contained within Table 1.2 of the Historical Tables of the U.S. Budget, we've shown the trend the Obama administration expects after tax rates rise with the expiration of the 2003 tax cuts after 2010.

Unfortunately, these forecasts presume strong economic growth similar to that of the 1990s and do not incorporate the costs of the proposed health care reform now being considered in the U.S. Congress, so this trend is unlikely to be observed. Regardless, since these data points fall outside the lower margin, we can reasonably anticipate that a significant increase in marginal tax rates will be enacted.

If the Obama administration holds to the recent practice of U.S. politicians of keeping near the lower margin, the expected national debt burden for 2011 of 2.9 indicates that the top marginal income tax rate will increase to roughly 44-45%. Given the President's political party's current large majority in the U.S. Congress, it is possible that tax rates could go much higher. The tax rate corresponding to the central curve for the national debt burden expected in 2011 is 67-68%.

Happy 5th anniversary! We wish we had better news for you!