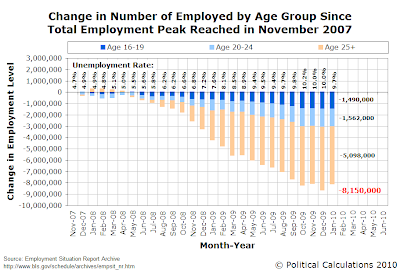 We'll get to the snarkiness in just a bit, but first, let's salute the U.S.' unemployment situation, which appears to be stabilizing, at least according to the latest news from the Bureau of Labor Statistics. Even for teens, as we think we now have enough data to draw that conclusion to confirm our prediction from last September that this would happen by the end of 2009!

The good news about the latest news on unemployment in the U.S.? The last time the total change in the number of people being counted as being employed during the current recession was at the current level, just in November 2009, the unemployment rate was 10.0% instead of 9.7%. Now that's an improvement! 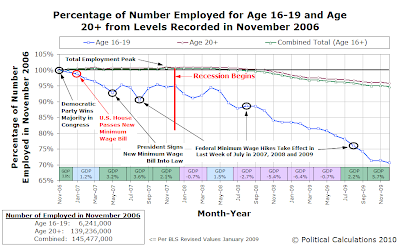 But what did it take to get that improvement? Our next chart combines the percentage change in employment levels by age group against the annualized measure of GDP for each quarter since November 2006, when teen employment levels peaked.

As we can see, it took a 5.7% annualized growth rate for GDP in the fourth quarter of 2009 (according to the advance estimate for this data) to stop the descent. It's probably then a good thing that the U.S. didn't have another quarter of 2.2% GDP growth - if things went like they did in the third quarter of 2009, a lot more jobs would have been lost at that growth rate.

It's almost enough to make us long for the days of 1.5% real GDP growth, back in the second quarter of 2008, the last time the employment situation improved for two consecutive months! In a row! Thank goodness for the stimulus package!