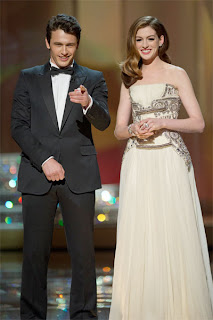 LOS ANGELES -- The political, economics and entertainment worlds were stunned today to discover that the true identity of the author of the Political Calculations blog was none other than actor James Franco.

James Edward Franco, 32, is well known for his work as an actor, director and writer, whose breakout starring role as an actor came in the 1999-2000 television series Freaks and Geeks. Franco was nominated for a 2010 Best Actor Academy Award for his role as mountain climber Aron Ralston in the film 127 Hours.

Franco most recently attracted attention as a co-host of the 83rd Academy Awards with movie actress Anne Hathaway, and is featured in a starring role in the motion picture Your Highness, which will be released in theaters on April 8.

Franco has gained a reputation as one of Hollywood's leading work horses, taking on an extraordinarily large number of simultaneous projects, which became the focus of a recent humor sketch on Saturday Night Live.


That SNL sketch has turned out to be more true than anyone could have realized.

Franco's identity as the mysterious blogger "Ironman" for the Political Calculations web site began to become apparent after a profile for "Ironman" appeared on the Seeking Alpha web site, which suggested the author was likewise engaged in a large number of simultaneous occupations:

Ironman is the alias of the blogger at Political Calculations, a site that develops, applies and presents both established and cutting edge theory to the topics of investing, business and economics. We should acknowledge that Ironman is either formerly or currently, and quite possibly, simultaneously employed as some kind of engineer, researcher, analyst, rocket scientist, editor and perhaps as a teacher of some kind or another. The scary thing is that's not even close to being a full list of Ironman's professions and we should potentially acknowledge that Ironman may or may not be one person. We'll leave it to our readers to sort out which Ironman might behind any of the posts that do appear here or comments that appear elsewhere on the web!

The connection became clear however after a blog post written by "Ironman" critical of the motives behind the anti-U.S. fervor of recent Hollywood movies and predicting that the 83rd Academy Awards was "doomed to flop," never-the-less inexplicably promoted Franco's and Hathaway's upcoming hosting roles in the televised broadcast of the event on the ABC television network.

Given the magnitude of the entertainment disaster that unfolded that evening, Franco was likely using his insider knowledge of the broadcast's preparations and rehearsals to warn his friends among the economics and finance blogging communities that would be the case, so they would not be disappointed and angry to lose over three hours of their lives that they would never be able to get back, ever, by watching the event.

Franco could not be reached for comment at the time of publication, however an article by "Ironman" appeared on Political Calculations seemed to confirm his identity as the author.