Political Calculations
Unexpectedly Intriguing!
23 September 2011
How Much Weight Will You Really Lose?

Are you dieting and/or exercising to lose weight right now? And how much weight do you expect to be able to lose and keep off by following your weight loss plan?

You've probably heard that rule of thumb that says you can lose one pound by either eating 3,500 fewer Calories over time or by burning 3,500 more Calories through exercise. And you might very well have heard it from some seemingly reputable sources, like NBC's Today show or from the winning contestants on that network's show The Biggest Loser.

The only problem with that kind of math is that it doesn't work in real life. Here's what we learned on that topic last year, when we looked at what might happen to our weight if we started eating one extra chocolate chip cookie (or 210 extra Calories) every day:

What happens in real life is that your body's metabolism will adjust over time to compensate for the additional calories you're consuming, in such a way that the amount of weight you might gain will be much smaller than what that 3,500 calories = 1 pound relationship would predict.

The body's process of metabolic compensation then works in reverse if you're trying to lose weight. Here, many people will recognize that force at work if they ever had the experience of succeeding in losing some weight, but reaching that certain point where it became really tough to lose any more.

Kevin Hall is a biologist at the U.S. National Institute of Health whose research into the body's metabolism has led him and his colleagues to publish a new paper in the Lancet medical journal, which quantifies how a person's metabolism adjusts when they change their calorie intake or physical output.

Better still, they developed a web-based application where you can apply the mathematical model they've built based upon their research for yourself!

We took their tool for a test drive and were pretty impressed. In our first screen shot of what the Human Body Weight Simulator can do, we entered the data for a 35 year old woman who is 5 feet, 8 inches tall and weighs 170 pounds, whose daily physical activity is very light.

We then had the tool calculate what it would take, just in reduced food intake, for our heroine to lose 10 pounds in 30 days. 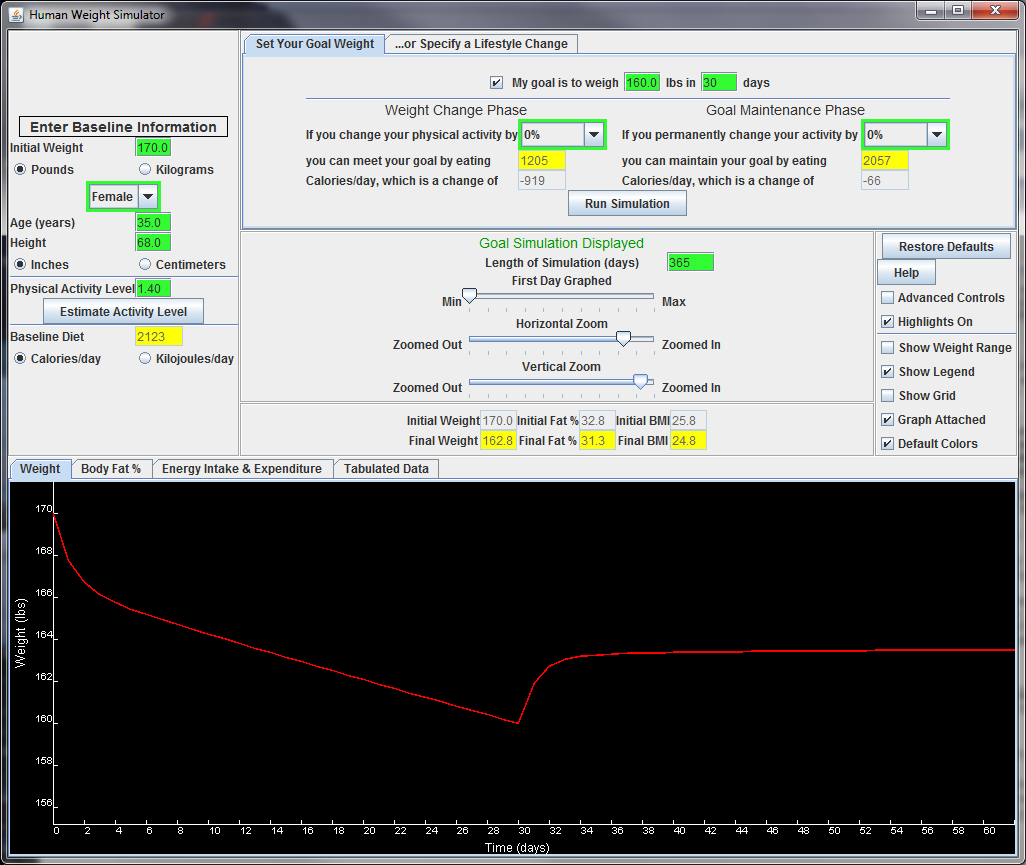 Here, we find that our heroine can lose the 10 pounds in 30 days by cutting her typical daily intake of 2,123 Calories down to 1,205 Calories.

After that, assuming she ups her food intake up to 2,057 Calories per day, her weight will rise back up to 162.8 pounds, where it will then hold steady at that level indefinitely (provided her Calorie intake and physical activity levels also remain steady!)

For our next screen shot, we specified a lifestyle change for our hypothetical woman, where we started her making just one change on the first day of her new diet plan: we put her on a 2,000 Calorie per day diet, just 123 Calories per day less than her estimated baseline diet value. 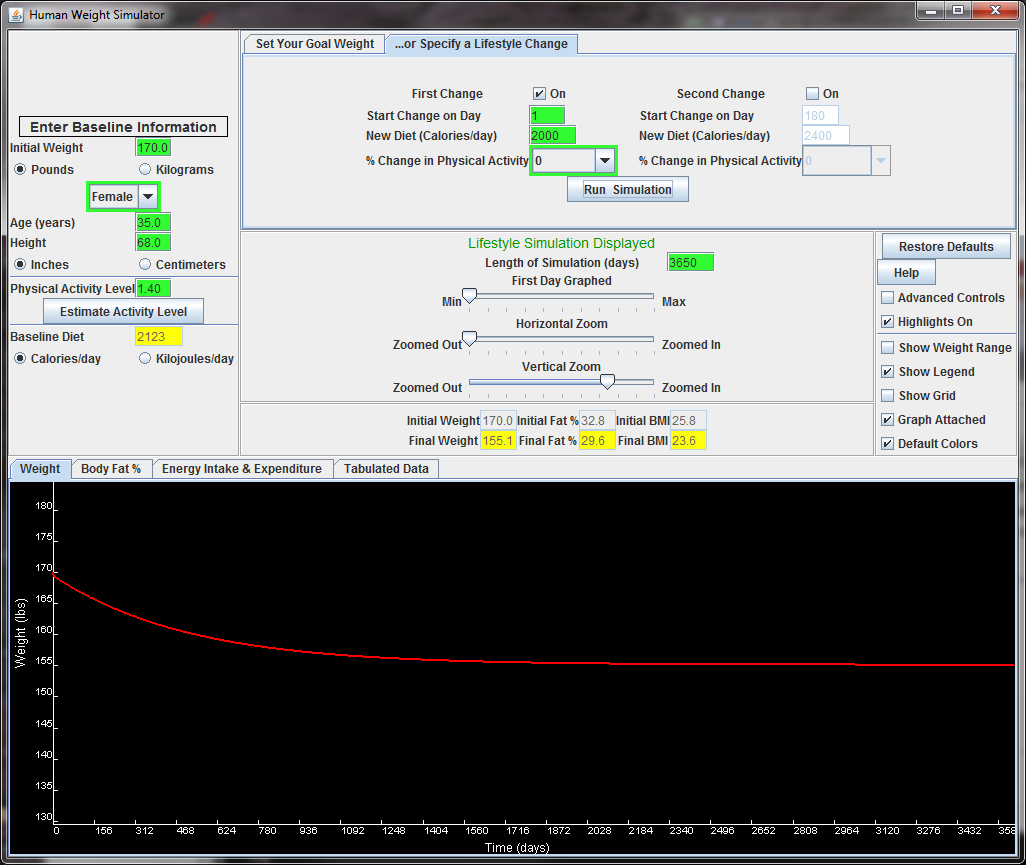 Three years later, her weight had dropped to 156.7 pounds. After four years, she hit 155.9 pounds, as her weight loss flattened out and her weight began holding steady. Ten years later, our simuluated heroine was maintaining a steady 155.1 pounds, about 15 pounds below her starting weight of 170.

By contrast, if every 3,500 Calories not consumed really leads to one pound of weight loss, after reducing her diet by 123 Calories per day over 10 years, our hypothetical woman would have lost 128 pounds, putting her weight at 42 pounds.

Overall, we found the NIH's Human Body Weight Simulator provides highly informative results, which are based on solid science.

On the user interface side of things however, we have some issues, as we found it to be somewhat of a mixed bag. Although the tool provides slider controls for the graphed portion of its output, it would be really nice to have a similar control for the time period displayed.

Likewise, we'd love to be able to have a control that would allow us to read the data points at various points along the graph, rather than directly entering the number of days.

All in all, the NIH's Human Body Weight Simulator meets our Silver Standard for online applications. Based on its strong information quality, we highly recommend it.