Political Calculations
Unexpectedly Intriguing!
11 May 2012
An Invention for the True Wine Connoisseur

Haven't you ever wished, while you were drinking wine, that there was some way you might be able to improve its aroma and taste right out of the bottle? Without having to use those aerator attachments that are designed to serve that purpose?

If so, then perhaps the just recently patented Drink Swinging Apparatus might be right up your alley! Here is inventor Min Zhuang's own description of the problem he seeks to solve with his U.S. patent 8,132,960, which was issued on 13 March 2012:

Some people like drinking, especially in a festival. Drinking will enhance festive atmosphere. In addition, drinking manners vary depending upon wines. Generally, fragrance can apparently emanate from dry wine after breathing (commonly called wine breathing) by contact with air for a period of time. The breathing is carried out for wine with lower aging so as to release undesired smell and foreign substance and so as to make strong fragrance of the wine prominent. The breathing is carried out for aged wine so that fragrance can emanate from the sealed wine which is aged by means of oxidation. Therefore, before drinking, a bottle cap of grape wine or other fruit wines often needs to be opened and to be swung so that the wine at a bottom within the bottle is alternatively turned up to a surface of the wine where it sufficiently and fully contacts with air, and the undesired smell volatilizes. As a result, the breathing of the wine is accomplished, and a pure and nice taste of the wine is obtained. However, in order to make some wines pure and smooth in taste, the wines should be warmed or iced. For example, people like drinking Shao-Hsing rice wine (Chinese yellow wine) or Japanese sake at a high temperature, and beer or aquavit at a low temperature.

Accordingly, the people will prepare wines in such a manner that varies depending upon wines. Some people may pour wine in a bottle into another container so that the wine can be laid aside or a period of time so as to sufficiently and fully contact with air and to volatilize undesired smell. In other words, breathing process is performed for the wine. Some people may place a bottle with wine therein into a barrel with ice therein to be cooled. Other people may warm the bottle with wine therein in a container. Not only the undesired smell is difficult to be volatilized, but also it is difficult for the wine to be uniformly warmed or cooled in all the manners. In addition, the above manners lack inspiration, and can not add inspiration and joy into the drinking atmosphere.

So what can truly add inspiration and joy into the drinking atmosphere? Why not some sort of Drink Swinging Apparatus?! Here is inventor Zhuang's description of how his invention solves the problems he has identified:

The present invention is made to solve at least one aspect of the problem existing in the prior art.

It is an object of the present invention to provide a shaker which swings a wine bottle in a reciprocation manner so as to speed up breathing of wine, and can move to excite appetite for drinking.

It is still another object of the present application to provide a shaker which has less friction force and can effectively reduce noise, which is generated by components of the shaker, in use,

Here's what it looks like, in patent sketch format: 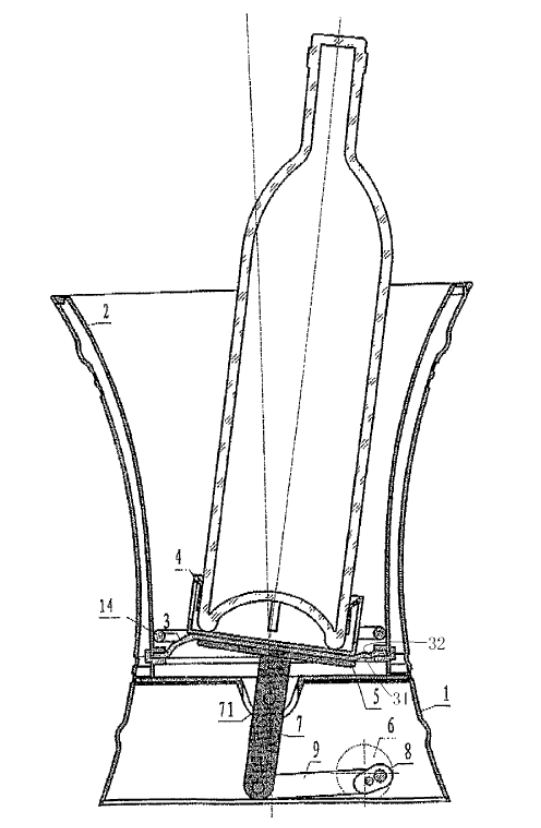 And here is how it works:

In operation, a wine bottle is placed on the bottle seat 4, and mixture of ice and water, or warm water is poured into the container 2. When the electrical motor 6 is started, the motor 6 drives the tray 5 through the crank 8 to swing rightward and leftward. The tray 5 drives a center portion of the seal sheet 3 and the bottle seat 4 to swing. While the wine bottle swings with the bottle seat 4, the water in the container is agitated, and at the same time, wine in the bottle is continuously mixed and sufficiently contacted with air so as to be oxidized by means of the swinging. Furthermore, the water in the container is agitated to be uniform in temperature by means of the swinging of the wine bottle, thereby cooling or warming the wine quickly.

But that doesn't really do justice to how Zhuang proposes to really add joy and inspiration into the drinking atmosphere with his Drink Swinging Apparatus. For that, we must consider the additional embodiments that might be used to solve this problem:

In another embodiment, a water jetting device or a mist spraying device (not shown) is disposed in the container 20. This will improve visual sense of the wine shaker, and adds interests and joyness to the people during the swinging of the bottle. Also, it achieves the flowablity of the water in the wine shaker. In a further embodiment, a decorative lamp (not shown) is disposed to the container 20. Light from the lamp can make jetting and spraying of water, and the swinging of the bottle prominent to the observers.

Although a drink shaker of the present invention is described with respect to a wine bottle as an example, it apparently can be used to other drinks, such as carbonated drinks, coffee drinks, tee drinks, contained in bottles or those similar to the bottles.

Ah yes! We look forward to the Drink Swinging Apparatus' use with carbonated drinks, especially with that water jetting or mist spraying device. What could possibly go wrong?

Alas, we must wait to find out as the invention has yet to make it to the market. In the meantime, while it may not be what you might have visualized from its name, we hope that knowing that Patent 8,132,960 has been issued adds both inspiration and joy to your drinking atmosphere this weekend!