We say "often" because the stock market can be a very noisy place from time to time. We've observed stock prices diverge from where their expected future dividends per share would place them. These deviations are driven by what we've come to call "noise events", which are things to which investors react, such as news, that have little effect upon the fundamentals underlying the market.

As we've seen, news-driven noise events tend to be very short-lived and stock prices soon resume following the signal being sent by their dividends per share, most often within a day or days, as the impact of the news affecting stock prices fades with the onset of other news or more significant changes in the outlook for the market. No matter what, all noise events end - it's only ever a matter of when.

However, some noise events have much longer durations and have much bigger impact on stock prices than what might be called ordinary news-driven noise events.

That's relevant today because of the likelihood that the U.S. Federal Reserve, in reacting to a deteriorating economic situation in the U.S., may announce that it will implement a third round of quantitative easing. Combined with other central bank actions that may be taken in Europe and China that would initiate a new noise event for the U.S. stock market, where stock prices will once again deviate from where their dividends per share would otherwise place them. We've observed that stock prices rose 10-15% above what those levels would otherwise have been in the Fed's earlier rounds of quantitative easing. 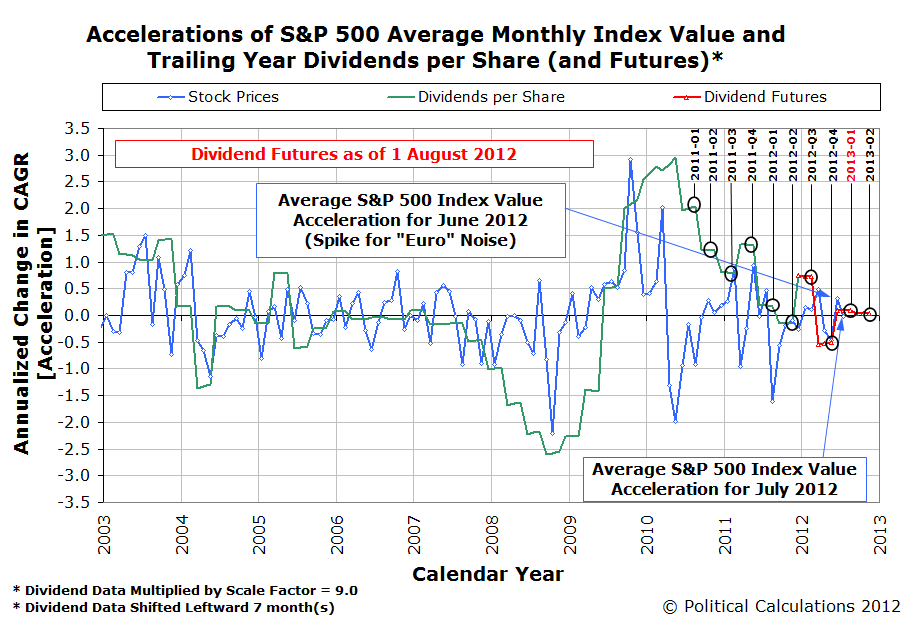 We find that stock prices going into 1 August 2012 are just about exactly where the dividends expected for the first quarter of 2013 would put them. Depending upon what the Fed does, we'll have a very good frame of reference for measuring the impact of a new noise event upon stock prices.

Our regular readers will note that the futures data for both 2013-Q1 and 2013-Q2 are much changed from the previous edition of our chart. S&P is reporting the amount of dividends actually paid in 2012-Q2 is $7.45 per share, which is quite a bit higher than the $7.12 we had projected using IndexArb's dividend futures data as of 19 March 2012, which is when we locked in this estimate for 2012-Q2's dividends per share.

Normally, we've found IndexArb's data to be within 5 to 12 cents per share of S&P's official figure. We suspect that the combination of term mismatch between the effective dates of the S&P 500's dividend futures contracts and the calendar quarter and changes in the weighting of component dividends within the S&P 500 during the calendar quarter likely account for the much larger than expected difference between the two.