Now that it's the day after Thanksgiving, when Americans are collectively digesting the turkeys that graced their family's dining tables, some are turning their attention toward planning the next year's feast. Perhaps, instead of dining on what might be called a farm-raised frankenbird, it might be better to hunt one a real one down in the wild, the way the original pilgrims did.

But that presents a problem, because while turkeys are found in many places throughout the country, they're notoriously difficult to hunt. It takes a lot of stealth to be successful at it, since turkeys in the wild are reported to be surprisingly intelligent.

Or perhaps not so much, if U.S. Patent 7,828,003 is any indication. The patent, which was issued to Tom Montecucco of Spokane, Washington on 9 November 2010, describes what we'll call the "ultimate turkey blind" as follows:

... a hunter concealment device is provided having a canopy frame, a panel and an image of a game animal. The canopy frame has a shaft, a central hub, a plurality of ribs each pivotally coupled at a radial inner end to the hub, a sliding ring, and a radial array of stretchers each pivotally coupled at one end with the sliding ring and pivotally coupled at another end with a respective rib. The central hub is carried by the shaft. The sliding ring is mounted for movement along the shaft. Movement of the sliding ring along the shaft towards the central hub is operative to kinematically articulate the canopy frame between a folded orientation and an unfolded orientation. The panel has a front surface, a rear surface, and an outer periphery. The panel is supported by the canopy frame between stowed and deployed configurations. Then image of a game animal is provided on the front surface of the panel.

Sounds impressive, doesn't it? But if you take a moment and read through it closely, you'll realize that what the invention really is, is an umbrella that features a large picture of a turkey on it. And if words aren't enough, the following images from the patent should confirm it for you. The first patent image shows an intrepid turkey hunter demonstrating the portability of the collapsible hunting blind. 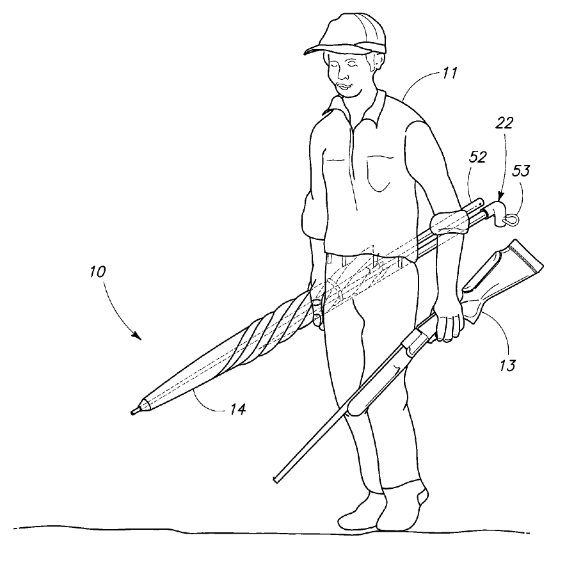 Our second patent image shows the invention deployed as the desired prey might see it. 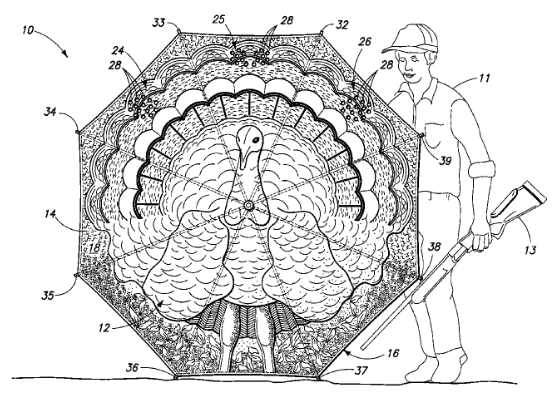 And our third image from the patent shows the hunter concealed behind the collapsible hunting blind, where he awaits the opportunity to obtain next Thanksgiving's centerpiece. 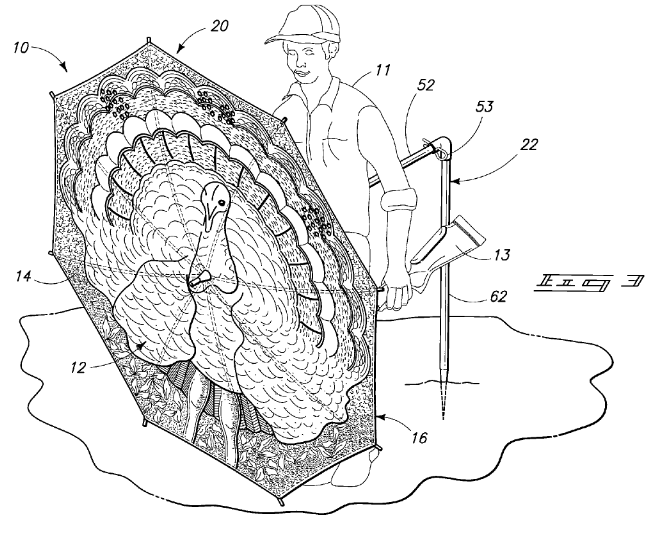 We added all the exclamation marks because we suspect that this might actually be dialog from a Mark Trail comic strip someday.

We're not alone in our observations that the invention is rather absurd. Gene Quinn, a U.S. patent attorney also weighs in:

It is a bit difficult to take this invention too seriously for several reasons. First, according to Oregon State University poultry scientist Tom Savage, turkeys are “smart animals with personality and character, and keen awareness of their surroundings.” That being the case, exactly which turkeys are likely to be attracted by a 6 foot turkey plastered onto a giant umbrella laid on its side, as pictured in the main drawing in the patent? Furthermore, Figure 13 (see below) is exactly an umbrella with a turkey decoration, yet the patent describes Figure 13 as a “fully deployed configuration of a blind as as to illustrate turkey decoy image.” Really? A hunting blind? This is an old fashion umbrella.