In 2010, the U.S. Department of Health and Human Services was set up with a slush fund of one billion dollars to support the implementation of Obamacare. If we go by the department's summary of its Fiscal Year 2014 budget proposal, it would appear to have already burned through $811 million through 30 September 2013, the end of the federal government's 2013 fiscal year: 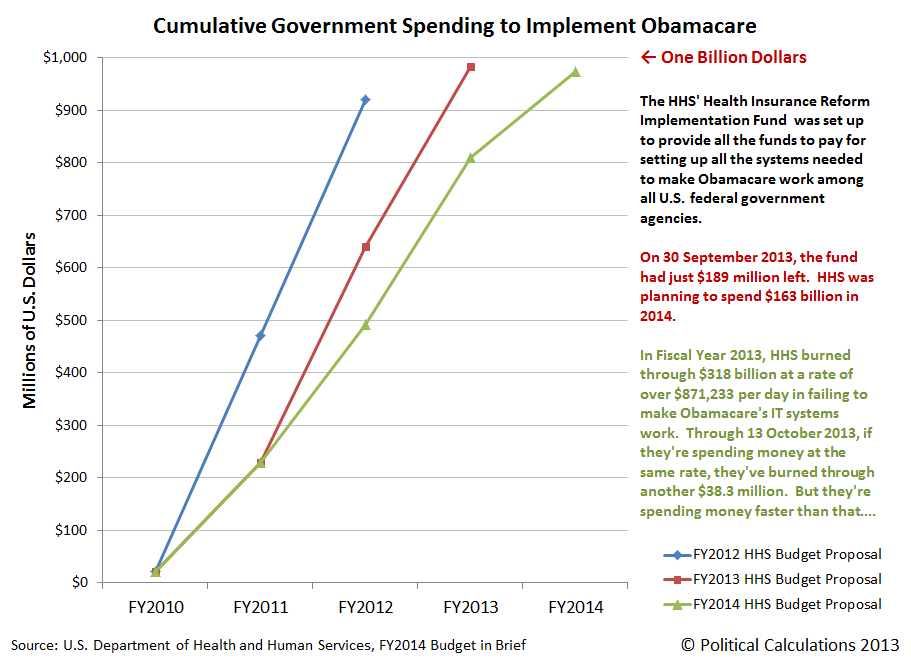 That would leave the department with just $189 million left to spend. It was planning to spend $163 million in the federal government's Fiscal Year 2014, which began on 1 October 2013.

Instead, the problems that have plagued both the department's Healthcare.gov web site and the back end systems that support its operation are forcing the agency to spend this money on fixing its problems.

Keeping in mind that HHS was burning through money at an average rate of $871,233 per day during the federal government's 2013 fiscal year, it is very likely that it is now spending much more than that amount per day as the Obama administration is desperate to keep President Obama's signature achievement from becoming an unmitigated failure.

Something has to give, because they cannot both repair Obamacare's IT systems and web site and spend what they were planning to spend to do other things in FY2014. HHS is running out of money and cannot do both.

Oh, by the way, we described how we could have eliminated HHS' technical problems within a very short period of time for just $47 million back on 22 October 2013. And as far as we're concerned, the hardest part of implementing our solution is already done. And yet, the Obama administration would appear to be more concerned with funneling money to its crony corporate partners than it does in actually making it possible for regular Americans to shop for and buy health insurance as they might choose.

Perhaps a good question for a mainstream media reporter to ask is why does the Obama administration insist on doing those things? And a really good question for a skeptical U.S. Congress member to ask is why they should throw even more money to repair the Obamacare web site when our solution is already proving to be a much more viable and a much more affordable option?

U.S. Department of Health and Human Services. Fiscal Year 2012 Budget in Brief. Advancing the Health, Safety, and Well-Being of Our People. [PDF Document]. 2011.