Income inequality theory is a lot like ancient astronaut theory, in that in order to believe in it, you have to disregard a lot of evidence to the contrary.

Let's start with the most basic premise of income inequality theory: that when the rich become richer, the poor become worse off.

Today, we're going to revisit a time in recent American history that income inequality theorists claim represents a peak in the degree of economic inequality in the nation, where income became highly concentrated in the hands of just a lucky few, leaving millions of the poorest Americans at the lowest end of the income spectrum worse off.

And we're going to do that by comparing the top to the bottom, during the days of the Dot-Com Bubble. 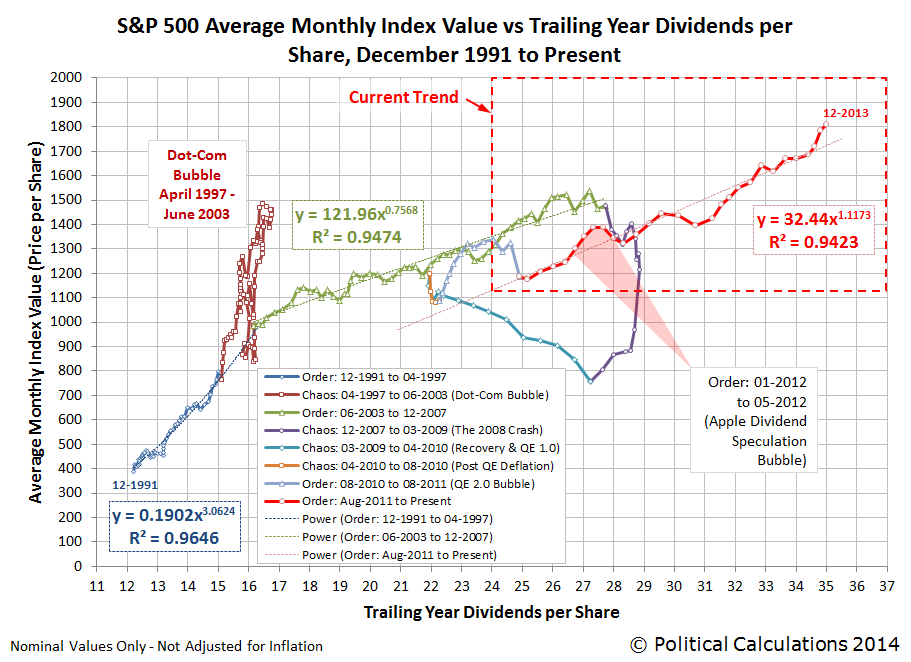 Perhaps no other episode in modern American history so clearly separated the people at the top of the income earning spectrum, who raked in millions upon millions from the capital gains associated with a booming stock market that rose to spectacular new heights, and the people at the bottom, whom we'll represent by the people with the least education, least skills and least work experience in the U.S. economy: Americans between the ages of 16 and 24!

The Highest of the High

Although we normally date the beginning of the Dot-Com Stock Market Bubble to the month of April 1997 [1], in reality, that bubble really began to inflate on Wednesday, 7 May 1997.

The action that caused the prices of stocks to suddenly start rising rapidly was the announcement that day that the Tax Relief Act of 1997 would incorporate a major reduction in the tax rate for capital gains, which would be retroactive to 7 May 1997 after the act was signed into law.

Because the tax rate for dividends wasn't similarly reduced, the disparity that was introduced in potential after-tax returns for investors sparked off the inflation phase of the Dot Com Bubble. Investors quickly bid up stock prices, and especially the stock prices of companies that didn't pay stock-price reducing dividends, as they could realize greater after-tax returns that way.

An adverse feedback cycle soon developed, amplifying the inflation of the bubble, which continued boosting stock prices up to its unsustainable August 2000 peak. After which, the Dot Com Bubble entered its deflation phase, which lasted until the tax rates for dividends and capital gains were set to be equal to each other by the Jobs and Growth Tax Relief Reconciliation Act of 2003, which was signed into law on 28 May 2003, marking the end of the Dot Com Bubble.

The best way to see how out-of-the-ordinary the Dot Com Bubble was is to track its growth with respect to the dividends per share that the stock market generated during that period of time, and to compare it to the trends that came before and after. We've done that for the annual averages for the S&P 500 in the chart below, which we've also adjusted for inflation to be in terms of constant year 2000 U.S. dollars, since that year marks the peak for the Dot Com Bubble. 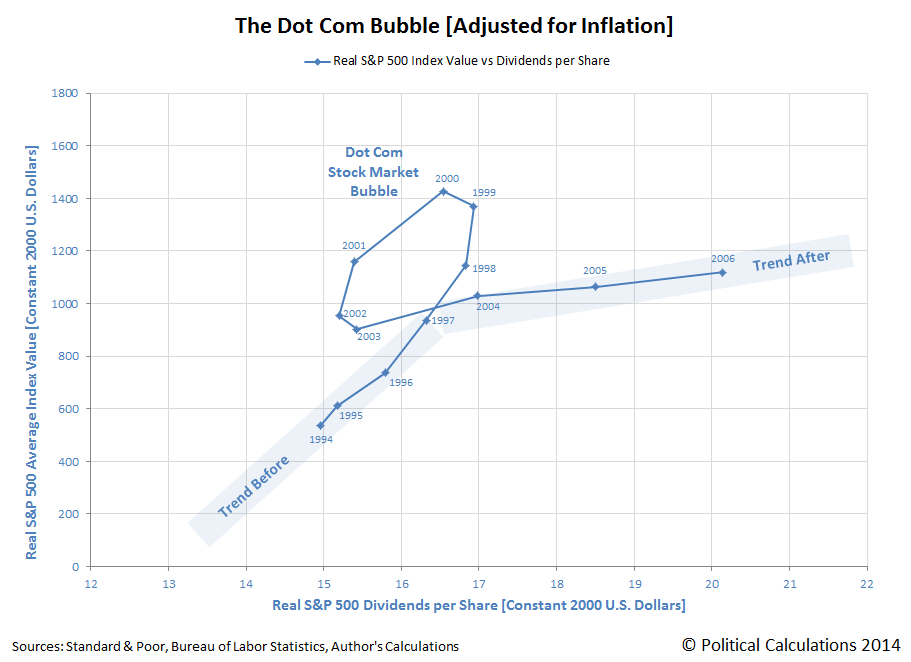 In the years in between 1997 and 2003, the investors who sold the stocks they owned during that time became the people whose growing income from those tax-cut fueled capital gains quickly put them in the stratosphere of the U.S. income distribution, as more income became concentrated [2] among these topmost income earners than in the several decades preceding the bubble's peak.

These individuals then represent the highest of the high. The very people into whose hands the most income was concentrated during the years of the Dot Com Bubble.

The Lowest of the Low

Meanwhile, the people at the bottom of the U.S. income spectrum would be earning the minimum wage. Since approximately half of the people who populate the lowest end of the income spectrum in the U.S. are between the ages of 16 and 24, we can use this portion of the population to demonstrate how they fared during this period of time.

To do that, we'll return to our recently updated minimum wage demand curve for this portion of the U.S. income earning population, updating it to also be in the inflation-adjusted terms of constant year 2000 U.S. dollars. 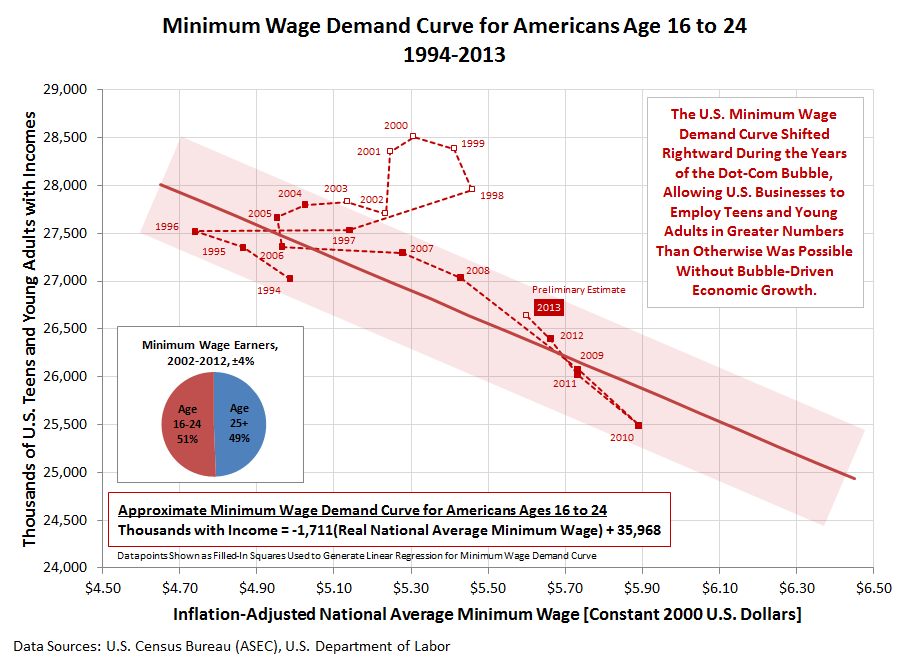 Notice that during the years of the Dot-Com Bubble that the number of Age 16-24 Americans with incomes swelled far above where our minimum wage demand curve says should have happened. At its peak in the year 2000, we estimate that over 1.6 million U.S. teens and young adults were earning incomes than would have been possible without the Dot Com Bubble's effect on the U.S. economy.

But that's not the most remarkable observation that we are now able to make.

What would happen if we overlayed these two charts? Remember, the first chart showing the trajectory of stock prices during the Dot Com Bubble directly indicates the outsized income gains that the people at the highest end of the U.S. income spectrum accumulated during the years that saw the greatest increase in income inequality in American history up to that point.

The second chart shows what happened for the people at the very bottom of the U.S. distribution income during those same years. We've already observed that far more people in this group would appear to have earned income during this time than would have been predicted by the data outside the period of the Dot Com Bubble, but how much worse off did they fare? 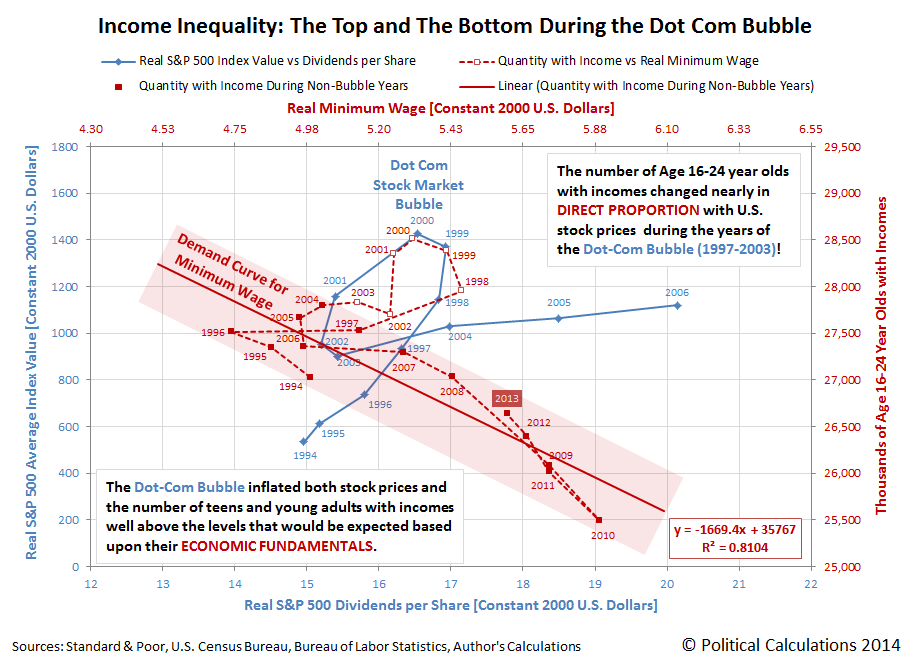 The people at the top saw those gains in the form of income acquired through investments in the U.S. stock market. The people at the bottom saw those gains in the forms of jobs that allowed millions more to earn incomes through wages and salaries, many at jobs that paid at or near the minimum wage, than they could if the economic activity generated during the years of the Dot Com Bubble did not occur.

But they did - with these millions of these additional people in the U.S. workforce earning billions of dollars. 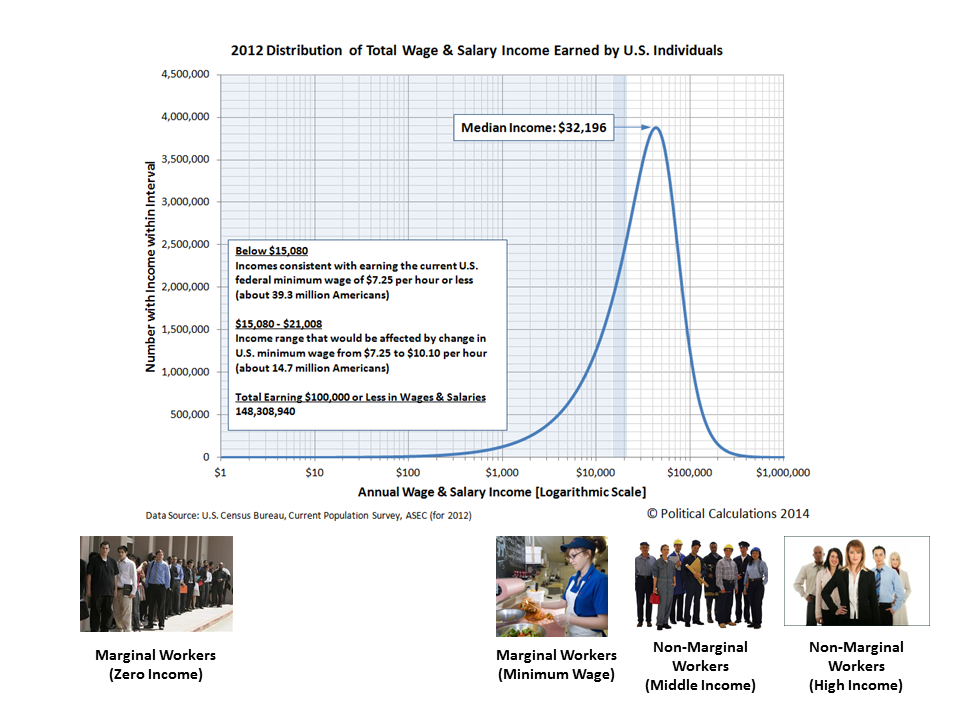 The only way this effect wouldn't play out is if the minimum wage were raised so high, it would effectively block employers from being able to hire marginally educated and experienced Americans because these individuals would not be able to generate enough revenue to cover the costs of employing them. As we can see in the charts above, the Dot Com Bubble generated enough additional economic activity to more than offset the negative effect of the minimum wage increases during that time. Alas, economic bubbles are not sustainable.

The alternative for these most economically marginal of Americans is to not participate in the U.S. job market at all and to earn zero income as a result.

During the Dot Com Bubble that was a choice. Perhaps such people who chose not to earn incomes instead chose to attend school and obtain masters and doctorate degrees in fields that just don't provide much of an economic return on their investment, so they saw no gains from the bubble-driven economy of the late 1990s or early 2000s. We strongly suspect that these particular individuals, along with their academic mentors who likewise were on the economic sidelines, are today's leading income inequality theorists.

[1] We follow the same practice for dating the beginning and end of stock market events that the National Bureau of Economic Research follows in determining when recessions begin and end. Here, the NBER doesn't select the month in which the economy actually begins to contract as the starting point for a recession, but rather the month in which the previous period of economic expansion peaked.

[2] The concentration of income at the top end of the U.S. income spectrum during the Dot-Com Bubble is clearly evident in Figure 2 of the material introduced here by Victor Yakovenko. There's a second period of income concentration later with the U.S. housing bubble, but as we've previously shown in a three part series (Part 1, Part 2, Part 3), that was just the result of a capital flow from one market to the other....

Meanwhile, there were the things that led up to those findings: