We previously described the pre- and post-War era including World War I as a "series of very disruptive events".

How very disruptive becomes very clear when we plot the trajectory that U.S. stock prices took with respect to their underlying trailing year dividends per share, which really is a pretty good demonstration of the chaotic phase state of stock prices. 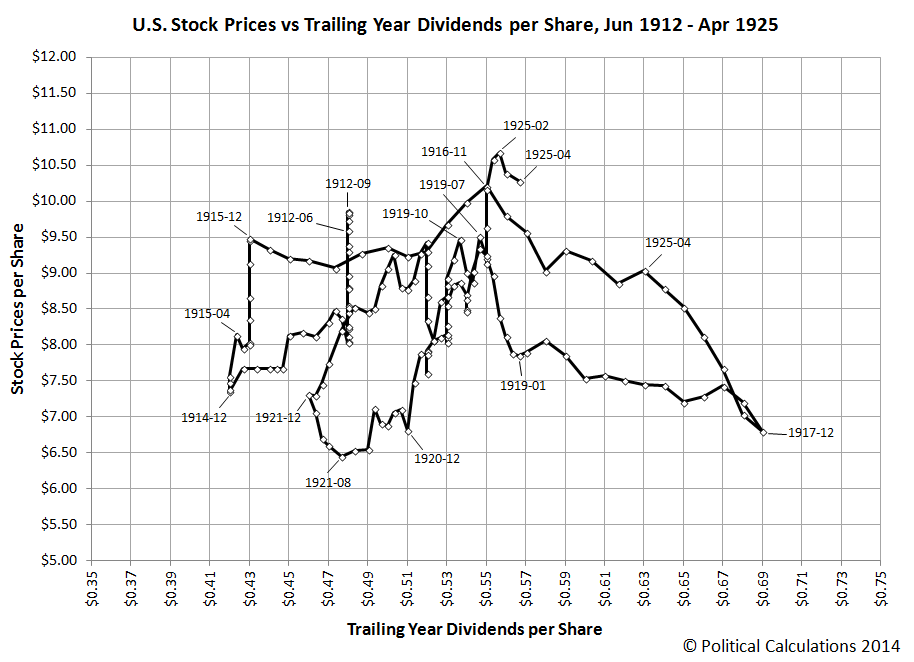 Speaking of which, we animated the major movements of stock prices in the chart above, noting some of the more significant events that defined this period of overall chaos, which ran from June 1912 through April 1925. One quick note: when we say "major movements", we mean when dividends were either rising or were falling - a good way to track the trajectory of stock prices is to put your finger or cursor over the data point marking the last point in time shown in each of the animation's frames.

It's not until December 1921 that we see something that somewhat resembles order returning to the stock market, with stock prices rising along with rising dividends per share, but that was interrupted by the recession that ran from May 1923 through July 1924. For all practical purposes, a more stable period of order did not reemerge in the U.S. stock market until the period after April 1925.

But then, the more stable period of order that emerged in the aftermath of this extended period of market chaos went on to terminate with the most dramatic event ever in stock market history.