Aren't Hollywood actors supposed to be among the most ardent supporters of left wing causes?

And as members of organized labor unions going back for decades, aren't Hollywood actors supposed to be looking out for the interests of those among their ranks who are clearly being exploited for their talent for precious little pay?

So you would think that such ardent supporters of left wing causes and union members would stand in solidarity with their fellow actors to prevent them from having their talent exploited for precious little pay. But you would be wrong, because these same people also believe that hiking the minimum wage will not cost them their jobs, but could potentially shut down the theaters where they work.

An impassioned, two-hour, open-mike meeting about the future of Los Angeles County's small-theater community Saturday at the Renberg Theatre at the Los Angeles LGBT Center in Hollywood drew an overflow crowd of well over 200 theater folks.

With just one exception, the dozens of speakers, including a calmly emphatic Tim Robbins, were motivated by a deep fear of what a proposed higher wage might do to their artistic scene.

Actors' Equity, the national union for stage actors, is seriously considering imposing a $9 hourly minimum wage for its members when they perform or rehearse in L.A.'s small venues.

Robbins and the rest think $9 an hour is exorbitant and that actors should continue working on small stages for what they have been receiving for decades. The going rate is $7 to $15 per performance, depending on ticket prices and seating capacities. Rehearsals, which can consume scores of hours, pay nothing.

Most of the small theaters are nonprofit organizations that need donations to augment ticket sales in order to sustain what's typically a hand-to-mouth existence.

Robbins is the founder and artistic director of the Actors' Gang in Culver City, launched before his 1988 ascent to movie stardom in "Bull Durham."

He stepped to a microphone wearing a pale blue denim jacket and said it made no sense for union officers to expect small theaters to survive under the proposed new terms.

We predict that many of the same actors will soon be calling for new government-funded support for the arts. But then, the government has been funding the arts for decades through government entities like the National Endowment for the Arts, so its kind of difficult to see how that would be anything more than another poorly targeted welfare program. Especially since the NEA has never funded any work that might be considered to be a significant artistic achievement.

Don't believe us? Try to name one work they've funded from the last fifty years that greatly influenced the direction of any form of art in the United States off the top of your head, without turning to Google's search engine to try to dig one up. Then turn to Google and see what stands out to you as the most influential work funded by the National Endowment for the Arts that would be instantly appreciated as such by regular Americans.

Like any bureaucracy that really only looks out for its cronies, they've mainly done mostly wasteful things that, when they have succeeded in drawing an audience of the public, was usually the result of a controversy it needlessly provoked, mainly as a device to attract a public audience in the first place.

But no work of any enduring artistic impact. That's because the artists funded by these government programs neither needed the support of the community nor of commercial audiences. And it shows, because to have an enduring impact, they would have to connect with both.

That's what makes these "exploitative" small theater groups so important and worth preserving. To survive, they have to connect with their audiences and with the communities in which they operate. That's a cauldron that develops the kind of artistic development and subsequent achievement that can stand the test of time.

But that's also a kind of competition that those who are connected with the "right" people on the left don't want to face. Which is why, after so many decades, they're out to close it down. Never mind that everyone who participates in those theater groups volunteers to do it because of how they develop their artistic potential and because of the opportunities they provide to perform.

Even if it means doing two shows a day for $7 to $15 a performance and rehearsing for free! 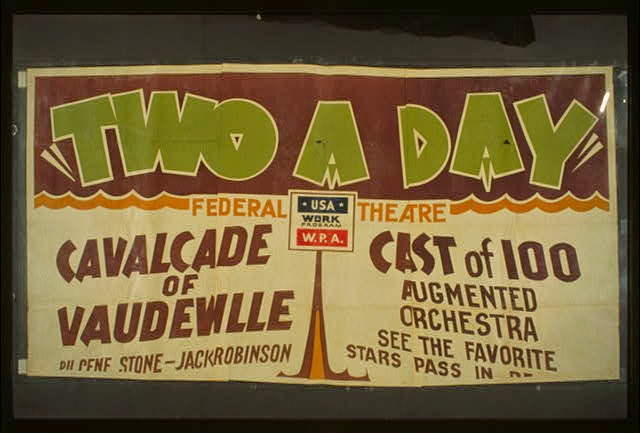 HT: Mish, who gave us the angle we needed to inspire us to talk about the motion picture business this eyar after we were so sorely disappointed by the reports of how lame the 2015's Academy Awards ceremony was. [Message to the Academy: Joan Rivers was the only one who made watching any portion of the "ceremonies" tolerable - it was a big, bad mistake to snub her among the posthumous recognitions!]