Now that we've demonstrated that the passage of the Affordable Care Act has resulted in a declining quality of life for average Americans since 2009, we thought we'd next discuss how that outcome came to pass, but first, we thought we'd first illustrate the trade off that American consumers are being forced to make using a production possibilities frontier curve - perhaps the first time in living memory that such a curve has been developed using real life data! 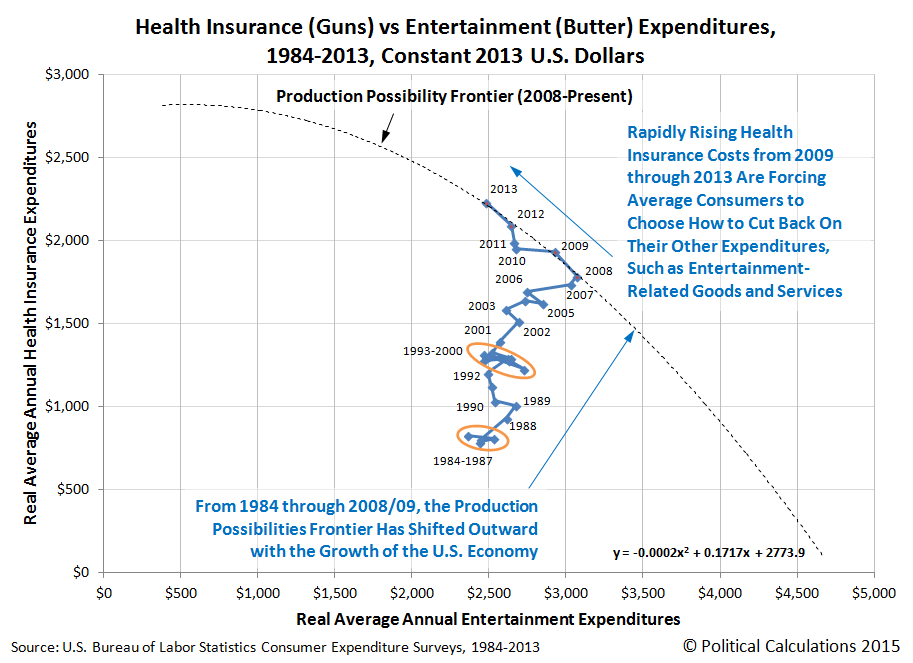 A generic version of this curve is often presented in basic economics textbooks, where it is often referred to as the "Guns and Butter" curve, which is used to illustrate the trade offs that consumers have to make when they have limited resources and are forced to choose how much of two very different goods they can afford to obtain based on their cost.

We bet you never expected the choice to be between health insurance and entertainment! As the chart reveals, consumers in recent years have found themselves in the situation where they are being forced to give up entertainment because of the rising costs of health insurance. Because entertainment is always a voluntary expenditure, which people choose to do in their leisure time as they engage in their preferred activities, anything that negatively impacts their ability to consume entertainment-related goods and services can be considered to be something that negatively affects their quality of life.

We'll demonstrate how the passage of Obamacare has resulted in a decrease in the quality of life for average Americans with the next several charts, in which we'll track how and why health insurance expenditures have changed in the period from 2005 through 2013. We selected this specific period of time because online health insurance brokerage firm eHealth has consistently published data indicating the average premiums that individuals have paid for their health insurance coverage by age group over this time, which helps explain the specific dynamics of why the cost of health insurance has increased so much following the passage of the Affordable Care Act into law on 23 March 2010.

Our first chart shows the annual average premiums for health insurance for the Age 18-24, Age 25-34, Age 35-44, Age 45-54 and Age 55-64 cohorts for each year from 2005 through 2013 - the typical costs paid by the non-Medicaid and non-Medicare eligible portion of the U.S. population who chose to buy health insurance policies for Single coverage during these years. 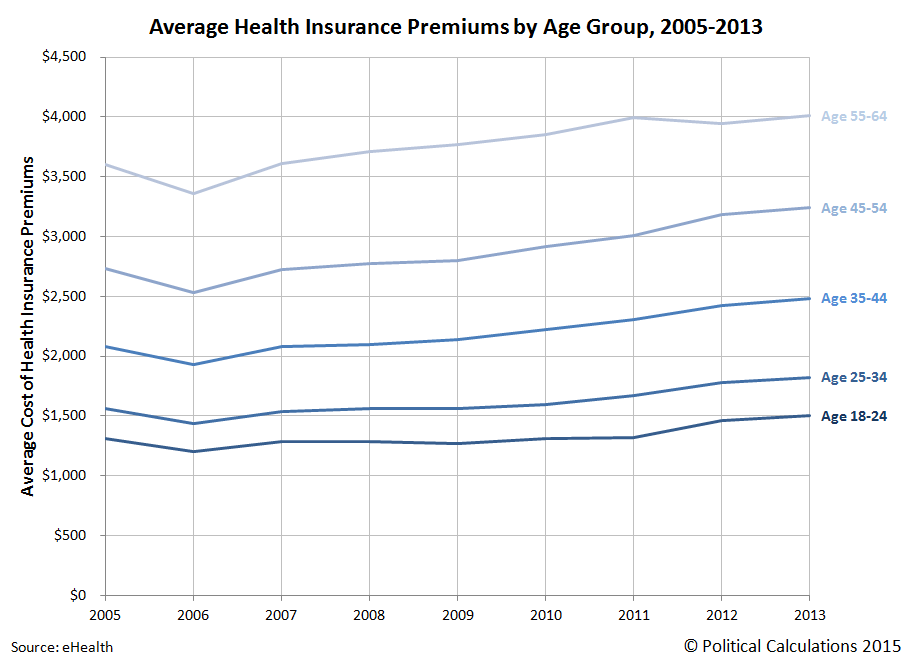 In this chart, we see that the cost of health insurance is age dependent, with the youngest Americans paying the least and the oldest Americans in the market paying the most. That makes sense not just because the oldest age group of Americans will typically have health care expenses that are six times those of the youngest age group of Americans, but also because this demographic group has the third highest incomes and also the greatest wealth by a wide margin.

Never the less, we see that except for a brief decline from 2005 to 2006, the cost of health insurance has increased for each age group.

But as we'll show next, it has risen more for some age groups much more than others. 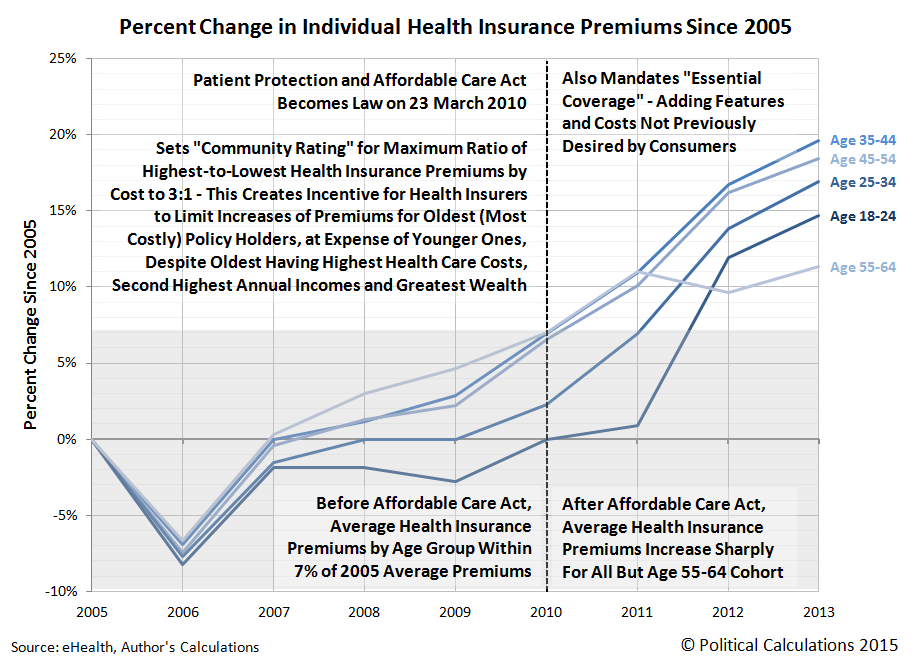 But beginning in 2010, which saw the passage of the ACA in the first quarter of the year, the cost of health insurance began to increase greatly, as health insurers moved to comply with the new requirements imposed upon them by the law.

In explaining why so many people during this time had their previous health insurance coverage cancelled, attorney Jason Cheung of LegalMatch explains the aspects of the Affordable Care Act that really jacked up the cost of health insurance in the U.S. during these years:

What Are Essential Health Provisions?

The essential health provision requires that the insurance plan must at least contain the following benefits:

The Affordable Care Act requires that all preventative services be covered with no out-of-pocket costs and that the mental health and substance abuse treatments meet federal standards. In addition, insurance companies cannot impose annual dollar limits on the coverage of any benefit considered "essential."

Many of these "essential" benefits are actually unnecessary for many patients. Men typically do not want maternity care; some people will never have children, while some patients will never abuse substances. Many state plans do not include a benefit or two even though the benefit is considered "essential." If you feel that an "essential" benefit is not needed, you can either seek a grandfather plan exception or move to another state.

But that burden wasn't equally shared by all health care consumers. As our chart above confirms, the Age 55-64 cohort saw their health insurance costs go up the least during this time, which is due to another mandate in the law: the "community rating".

But to stay within that limit, health insurers had to increase the amount of premiums paid by all younger groups to compensate for the greater amount of health care consumed by this oldest age group. Our next chart reveals the ratio of each age group's health insurance premiums with respect to those paid by the Age 18-24 age group, who collectively pays the lowest premiums. 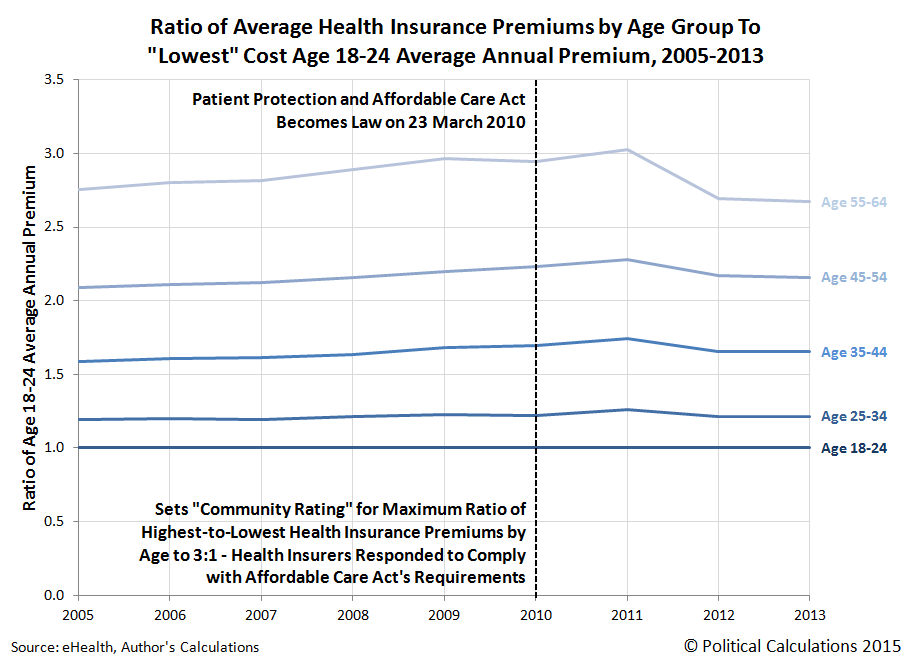 But because the premiums paid by those consuming the most health care services (the Age 55-64 group), satisfying the Affordable Care Act's community rating mandate requires health insurers to further jack up the costs paid by younger Americans - adding to their increased costs. This is very specifically why U.S. health insurers jacked up the cost of health insurance for the Age 18-24 group as sharply as they did after 2011.

That's how the implementation of Obamacare decreased the quality of life for average Americans by driving up the cost of health insurance. By forcing average American consumers to only be able to choose policies with unnecessary and bloated coverage and by forcing them to subsidize the demographically higher income and the wealthiest consumers of health care services through their premiums or else pay higher income taxes, the ACA is costing tens of millions of Americans hundreds and thousands of dollars each that they can no longer spend how they would rather choose.

No matter how you slice it, the passage of the Affordable Care Act has reduced both the quality of life and standard of living for average Americans. As we've just shown, the younger you are, the worse off you are.