Once upon a time, the only way that sailors crossing oceans could know if they were on course to their destinations required them to know what time it was. Verna Allee described the problem in The Knowledge Evolution:

In the Age of Exploration [1300-1600 AD] competitive advantage resided with those who had the best ability to navigate the globe. Those countries that ruled the seas--ruled the world. In those days, they found the great challenge in navigation is finding a way to tell time at sea. Unless you know what time it is, you cannot determine longitude. So, you see, in order to master space and thus circumnavigate the globe, you must first find a way to master time. A time measurement allows you to understand the relationship between the point where you are and the point where you want to be. If you understand that relationship, then you can chart a course and find your way home again....

Navigation boils down to a few simple elements: a good map, something like a sextant to tell you where you are, and a timepiece to help you measure your progress. These are good things to remember when trying to navigate:

Stock prices work almost exactly like that, with one important difference. Because the acceleration of stock prices is directly proportionate to the change in the rate of growth of their underlying dividends per share expected at specific points of time in the future, correctly anticipating where stock prices are going to go also requires investors navigating the markets to know the specific point of time in the future to which investors are collectively heading. 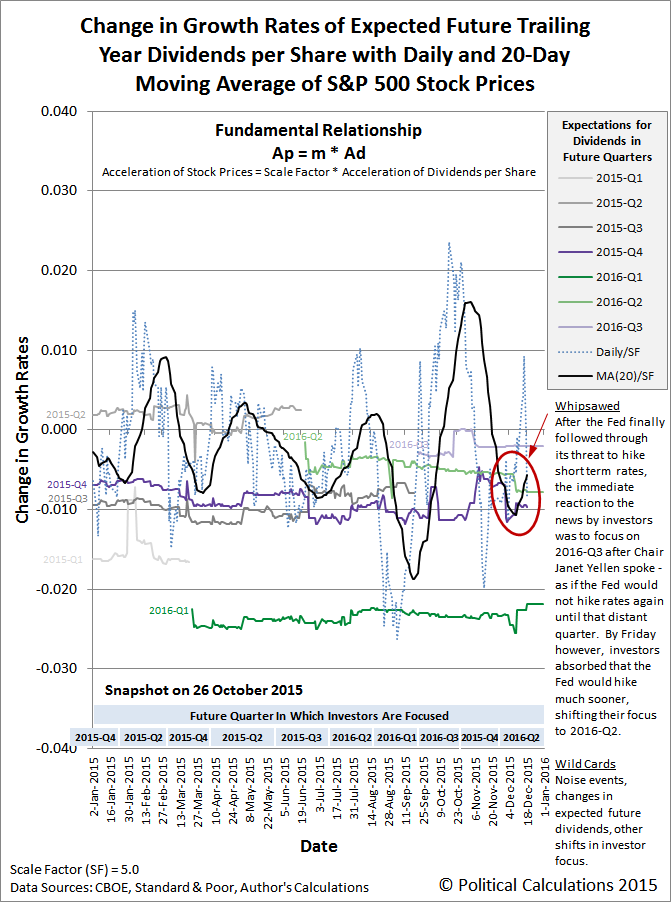 What makes that such a challenge to pull off successfully is that investors can collectively shift their forward-looking focus from one specific point of time in the future to another with very little warning. When they fully shift their focus from one such point of time to another, depending upon how different the expected acceleration of dividends per share is for each, the resulting change in stock prices can vary anywhere from a little to a lot. This shift in focus is not just what gives stock prices of their volatility, but also their quantum-like properties.

And because the things, or new information, that might prompt them to shift their attention from one point of time in the future to another often comes at random intervals, the effect is to give stocks a seemingly random trajectory where they are most often characterized by small movements, as investors can sustain their focus on a particular point on the future horizon for relatively long periods of time, that are then interspersed by large movements, which come as investors suddenly shift their focus to different points of time on the horizon. Stock prices can then be said to follow a quantum random walk, which really makes forecasting their trajectory a problem in quantum kinematics.

That's why competent forecasts for stock prices need to consider the potential quantum levels for stock prices based upon the rational expectations for dividends per share associated with the different points of time on the future horizon to which investors might turn their attention. Keep that in mind then when you read the following remarks, which we originally posted at 3:35 AM on Thursday, 17 December 2015 after observing that investors had just appeared to have shifted their forward-looking focus to 2016-Q3 in setting today's stock prices in response to the Fed's rate hike and Fed Chair Janet Yellen's comments the previous day:

Whenever the U.S. Federal Reserve has the full attention of investors, they give us the ability to tell how far forward investors are looking in time as they are making their current day investment decisions.

So when the Fed announced on 16 December 2015 that it would hike short term interest rates in the U.S. by a quarter percent, while also providing additional information about the likely future for additional rate hikes, we couldn't help but notice that investors would appear to have shifted their forward-looking attention to the third quarter of 2016.

For example, simply shifting their focus to 2016-Q2 before the end of 2015 would likely coincide with an approximately 3% decline in the value of the S&P 500. Meanwhile, a complete shift in forward looking focus to 2016-Q1 would correspond to a full 10% correction, with stock prices dropping by over 200 points.

But if investors stay focused on 2016-Q3, then the market is within just a percent or two of its ceiling for the remainder of the year.

After identifying the last known position of stock prices going into that trading day, we identified three very different outcomes for how stock prices would be most likely to change in the near term, all completely hinging upon whichever distinct future point of time that investors might shift their attention toward as the only differentiating factor for what the actual outcome would be.

As we expected, one of those three distinct outcomes came to pass. Conveniently for us, within two days of trading after the Fed's rate hike announcement, giving us something to write about this morning, as the value of the S&P 500 dropped by 3.3% through the close of trading on 18 December 2015.... 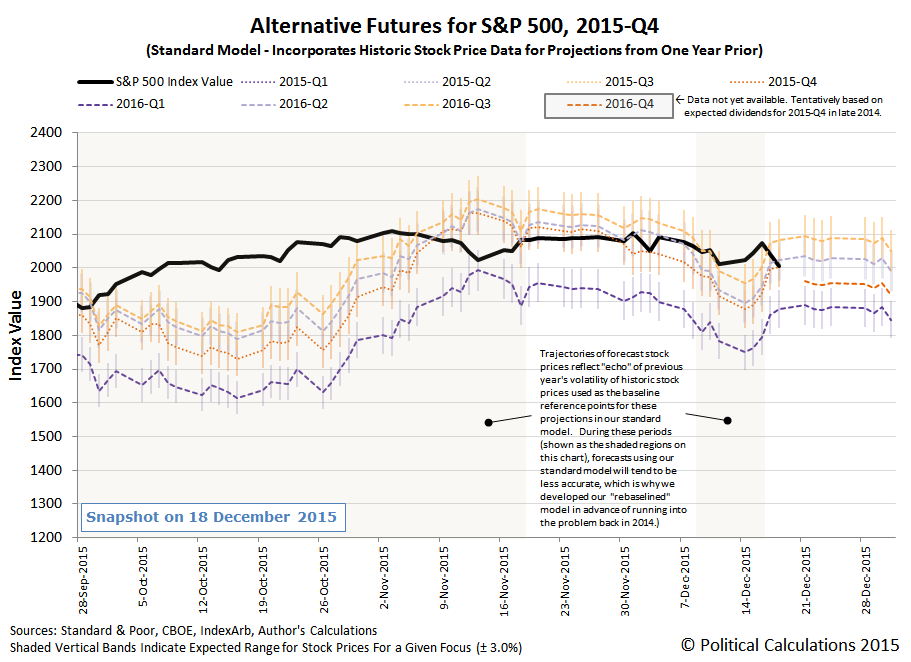 The shift in focus to the nearer term future horizon of 2016-Q2 is more than what would be expected by just purely random chance with the stock market's typical day-to-day volatility, and yet, if we're being honest, it's not really very random at all, as perhaps the most random thing about it is the timing of its occurrence.

This will be our last post on the S&P 500 this year, where we'll wrap up 2015 sometime early in 2016, where we'll also revisit our forecasting performance during the periods of time where we relied upon our rebaselined model. Sometime later this week, perhaps as early as later today, we'll start getting dividend futures data for 2016-Q4, allowing us to consider that new point on the horizon in our forecasts.

Until then, since investors would be most likely to focus upon the three quarters preceding that distant future quarter, we've provided you with what you need to anticipate where stock prices will go next through the end of 2015, having already marked their last known position on our charts above. All you need to do now is to determine how far forward in time investors are collectively fixing their attention on the horizon to tell where stock prices will go next.

It is, after all, just a simple problem in quantum kinematics - one that anybody can solve if they understand the relationships of time and space and can shift their perspective on the future's horizons. Welcome back to the cutting edge! 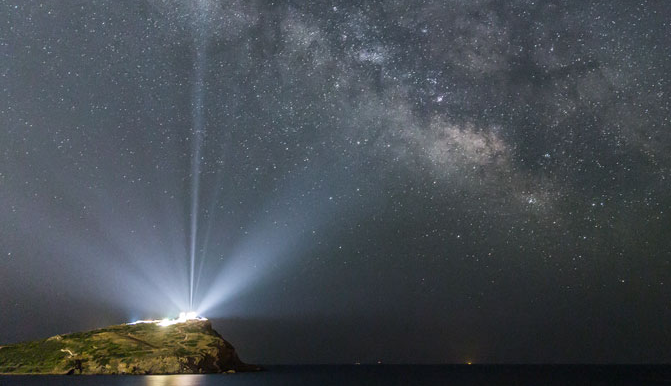 Update 21 December 2015, 6:38 PM EST: Here are the current expectations for the S&P 500's quarterly dividends per share for 2016, as determined from today's recorded values for the CBOE's dividend futures contracts for the S&P 500:

Meanwhile, here's the updated version of our alternative futures forecast chart through the close of trading on 21 December 2015: 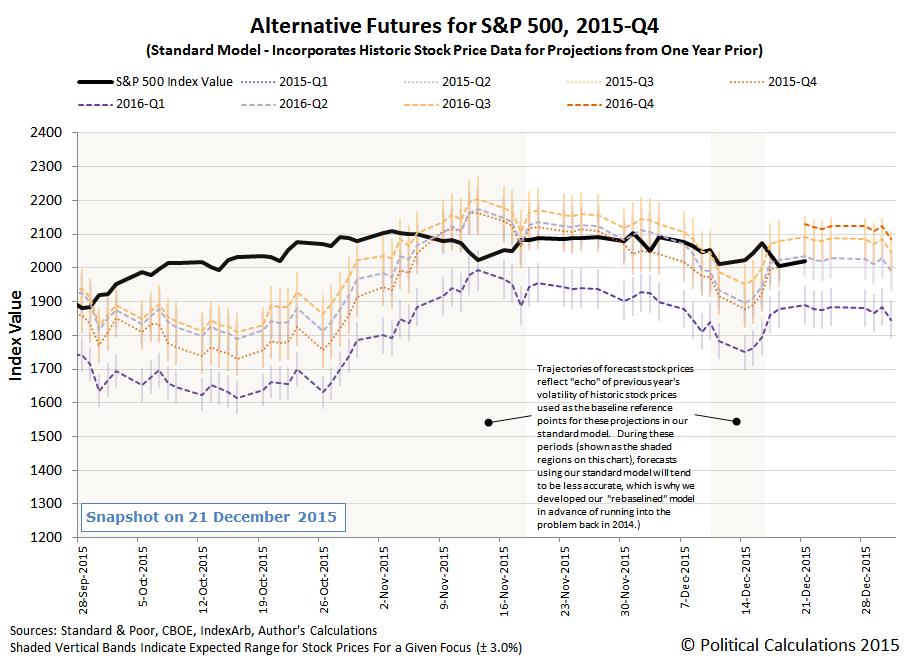