Quite a lot has happened since we last commented on the S&P 500 and the news events that influenced it during the first part of the third week of May 2016. In short, the following major events happened:

Following what happened over the preceding several days, U.S. investors appear to have focused on 2016-Q3 in setting the level of the S&P 500. Our alternative futures chart shows how the rest of Week 3 of May 2016 played out for the S&P 500. 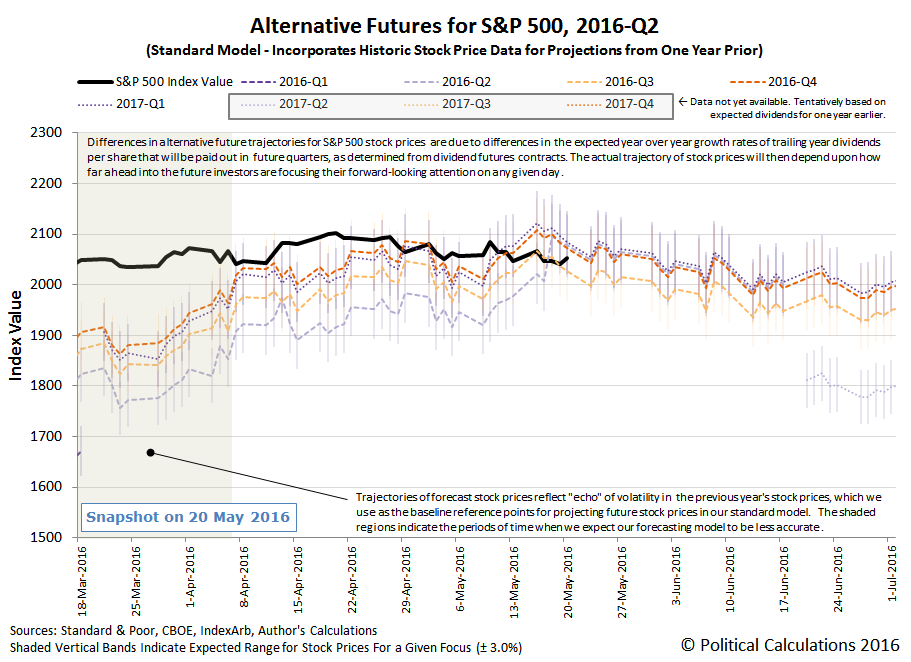 Here are the more significant headlines from the rest of Week 3 of May 2016 that caught our attention:

The Fed's net increase in its holdings of Mortgage Backed Securities (MBS) is reminiscent of the actions it took in 2012, when it became clear that the U.S. economy was beginning to slide toward recession during the summer of 2012, where the Fed's first action in QE 3.0 was to begin making large MBS purchases to further stimulate the nation's real estate market.

The Fed's intervention at that time succeeded in preventing the U.S. economy from falling into recession before the November 2012 elections, but following the elections, the Fed was forced to expand its QE efforts to offset the negative impact from the U.S. government's fiscal policies, where large tax increases desired by President Obama on all working Americans were set to take effect on 1 January 2013.

As we saw in 2012, the Fed's new MBS purchases should have little effect, if any, on U.S. stock prices. They are really a way to partially offset the full impact of its next planned interest rate hike, which they will now likely announce on 15 June 2016, but which will be implemented in 2016-Q3, which is why investors are focusing on this future quarter.

On a final note, we think that there is a pricing anomaly in the CBOE's implied forward dividends contract for S&P 500 in the second quarter of 2016 (CBOE: DVJN), which suddenly jumped in value from 113.00 to 116.40 on Wednesday, 18 May 2016, which has been sustained over the last several trading days. (You can estimate the amount of ordinary dividends that will be paid out for the S&P 500 during 2016-Q2 by dividing the value of these contracts by 10).

Since that large increase hasn't also shown up in the implied forward dividends for 2016-Q3 (CBOE: DVST), 2016-Q4 (CBOE: DVDE) and 2017-Q1 (CBOE: DVMR), which would confirm that the change is the result of a sustained improvement in the expectations for future dividend payments, it instead suggests that something unusual is going with the DVJN contract.

That is something that is possible because these contracts are periodically very thinly traded, which allows such pricing anomalies to occasionally develop. It will be interesting to see how long that situation might persist.