It's maybe the oddest thing we've observed to date, but 2017 may very well be shaping up to become the year of beer pong where the U.S. Patent and Trademark Office is concerned!

We know that's the case because we just stumbled across the second patent issued this year related to the venerable game of collegiate champions.

Unlike the watery edition of the game that we previously covered, U.S. Patent Number 9,643,067 issued to Scott Snyder of Morristown, New Jersey features a "trainer" aimed at enhancing the tossing skills for players of the U.S.P.T.O's new favorite American pastime. Here's an excerpt describing the need fulfilled by the invention from the Background section of the patent issued on 9 May 2017:

Tossing games of skill including for instance Beirut and Beer-Pong require coordination and skill on the part of the play. Such skill and coordination may be improved with practice and training. Further, the games of Beirut and Beer-Pong raise known sanitary concerns as balls in play are often in contact with both the ground of a playing room as well as beverages to be consumed by the players.

Consequently, devices are provided herein that provide for both training and sanitary play of the games Beirut, Beer-Pong, and other tossing games of skill.

Well, we're all for sanitary training and play where tossing games of skill are involved! We believe that Figure 13 from the patent perhaps best illustrates how the trainer achieves those ends after mounting the training device onto a wall: 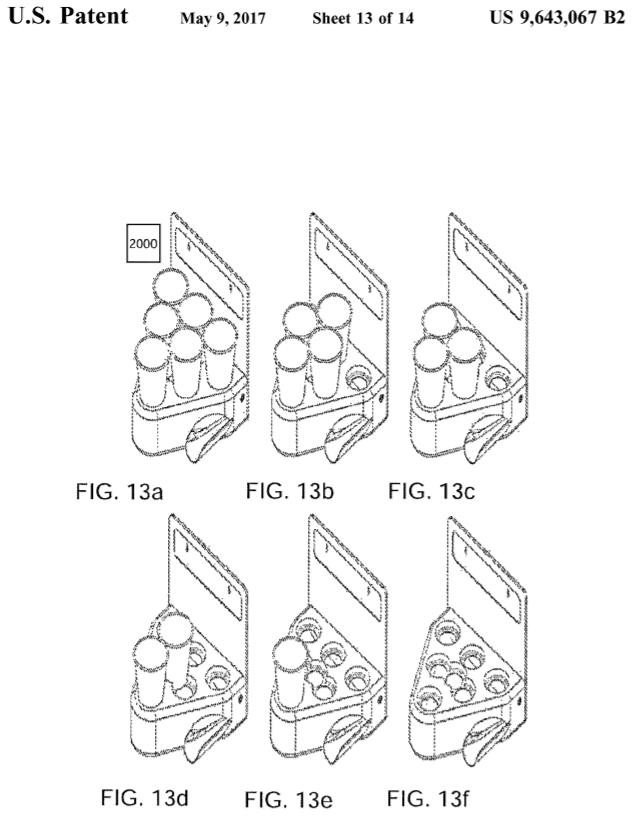 The patented beer pong/tossing game trainer uses hollow-bottomed cups as targets for trainees to practice their skills of either tossing or hitting balls into the cups. When they are successful, the ball then drops into the wall-mounted base structure, and is returned to the trainee through the ball chute on the side and the cup removed. The trainee can set up whatever arrangement of cups they desire to replicate potential game situations they might encounter in competition.

With two patents issued so far, in order for 2017 to become the U.S.P.T.O.'s year of beer pong innovation, another three patents invoking the name of the game will need to be issued before 31 December 2017 to take the title away from 2014.

And in case you're wondering, there are a total of just 15 issued patents mentioning beer pong to date, with the oldest, U.S. Patent Number 7,325,807 for a Beer Pong Table dating back to 2008. We may only be at the beginning of the cultural and technological phenomenon!