The risk of a national recession beginning in the United States anytime in the next year from 4 May 2018 through 4 May 2019 is virtually unchanged from the 0.6% reading we obtained just three weeks ago.

In fact, the main reason we're even bringing it up so soon is that we're trying to get back to a regular cadence in providing this kind of analysis shortly after the Federal Reserve's Open Market Committee meets to officially discuss whatever they're going to do with short term interest rates in the U.S., which they do every six weeks. The last time they met was just last week, where they did... nothing. As expected.

Unsurprisingly then, our recession probability track shows... almost no difference! Which is pretty much exactly what we should expect to happen in that situation. 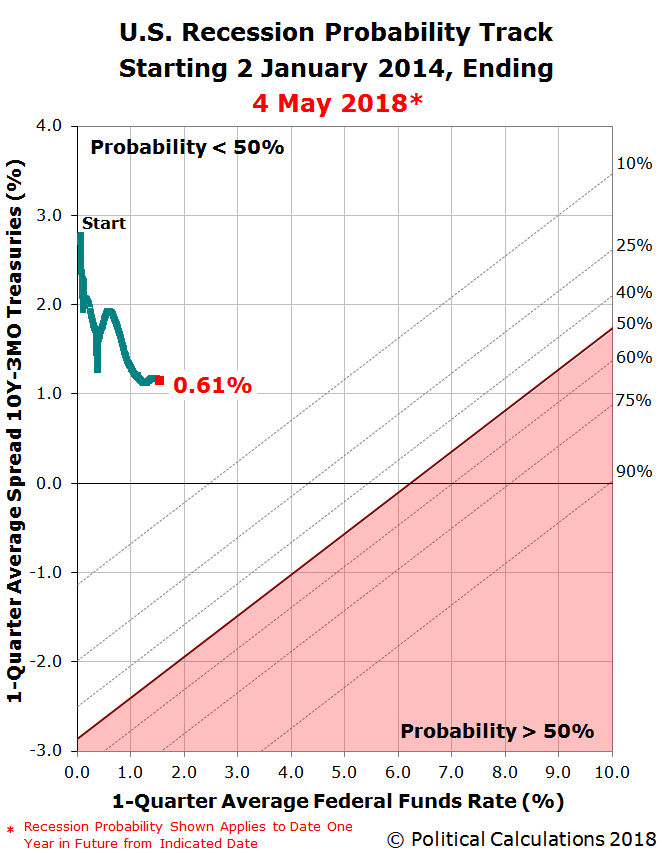 That won't always be the case, because if the CME Group's FedWatch tool is to be believed, there is a 100% probability that the Fed will hike its Federal Funds Rate by a quarter percent at the end of its 13 June 2018 meeting, raising its target range to 1.75%-2.00%, the highest it will have been since September 2008, which marks when the recession that began after the previous period of economic growth peaked in December 2007 began to transform into the Great Recession as a direct consequence of events that began in that month, which culminated in the Fed's ultimate mistake during that year's financial crisis.

Considering the update to our recession probability track, which is based on Jonathan Wright's 2006 paper describing a recession forecasting method using the level of the effective Federal Funds Rate and the spread between the yields of the 10-Year and 3-Month Constant Maturity U.S. Treasuries, we find that the spread between the 10-Year and the 3-Month Treasuries has slightly widened during the last few weeks, with the yield of the 10-Year rising faster than the yield of the 3-Month over that time. This change suggests that though the Fed is planning to hike short term rates in the U.S. in about six weeks, it is presently doing so in an environment where the current stance of monetary policy would appear to still be expansionary.

Now, although we won't go out of our way to discuss the recession probability risk in the U.S. again until after the Fed's next meeting in June 2018, unless news events should warrant such a discussion before that time, you don't have to wait for us to recalculate the recession risk odds - we've built a recession odds reckoning tool so that you can also do the math at any time you might choose! If you want to replicate our results from the recession probability track, please note that we're following Wright's methodology in using the one-quarter average for the yields and rates data in the calculations behind the chart, which reduces the amount of short-term noise that could otherwise skew the results.

If however you want to get a good sense of where the recession probability track is likely to head next, use the most recent data available, and compare the result you get in our tool with what we've shown in the most recent chart we've presented. The links below present the series since we restarted in in June 2017 in chronological order.