Political Calculations
Unexpectedly Intriguing!
January 7, 2019
The S&P 500 on the Verge of a Bear Market

A bear market is "a condition in which securities prices fall 20 percent or more from recent highs amid widespread pessimsism and negative investor sentiment." By that definition, the S&P 500 (Index: SPX) has verged onto the edge of a bear market during the last two weeks, having fallen by 19.8% from its previous record closing value of 2,930.75 on 20 September 2018 to 2,351.10 on 24 December 2018.

Since that Christmas Eve, the S&P 500 has experienced what might be best described as a bear market rally, which has been characterized by two remarkably strong closes: a 5.0% surge on Boxing Day and a 3.4% gain on Friday, 4 January 2018.

We wish we could say that we had seen the last of the bear, but the math behind how stock prices work is signaling something very different. The S&P 500 completed its fifth Lévy flight event of 2018, where investors have fully shifted their forward-looking focus toward the distant future quarters of either 2019-Q3 or 2019-Q4, where long held expectations of a deceleration in dividend growth at these times has brought stock prices down from their formerly lofty height. The following chart shows the trajectory of the S&P 500 against the backdrop of where our dividend futures-based model would set them according to how far forward into the future investors are looking. 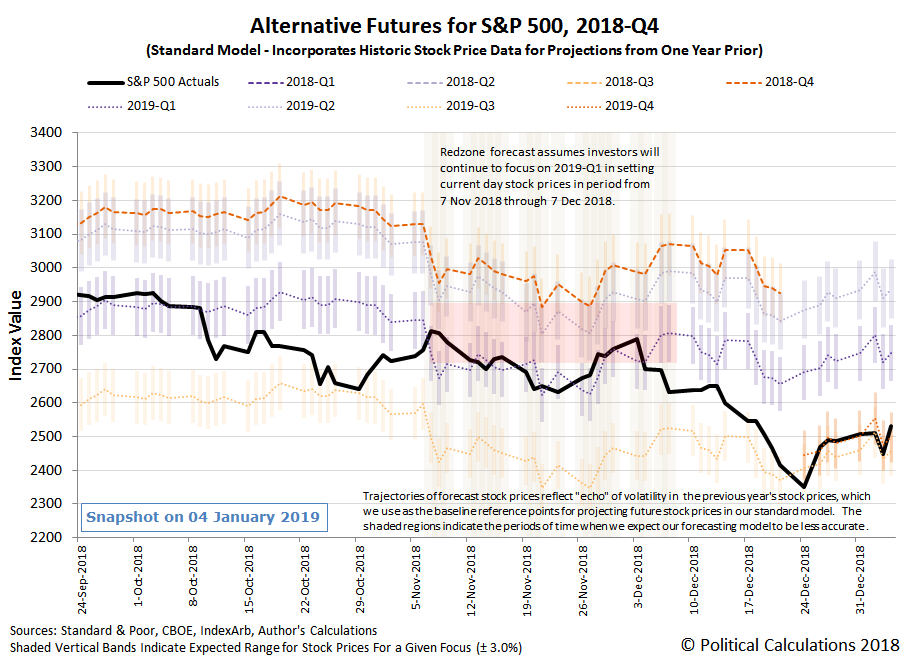 At this time, there isn't much difference in the expectations for year-over-year dividend growth between 2019-Q3 and 2019-Q4, where we don't see much point in distinguishing between the outlook for these quarters until that situation might change. With that in mind, here is what the dividend futures model is projecting for the future of the S&P 500 through the end of the first quarter of 2019. 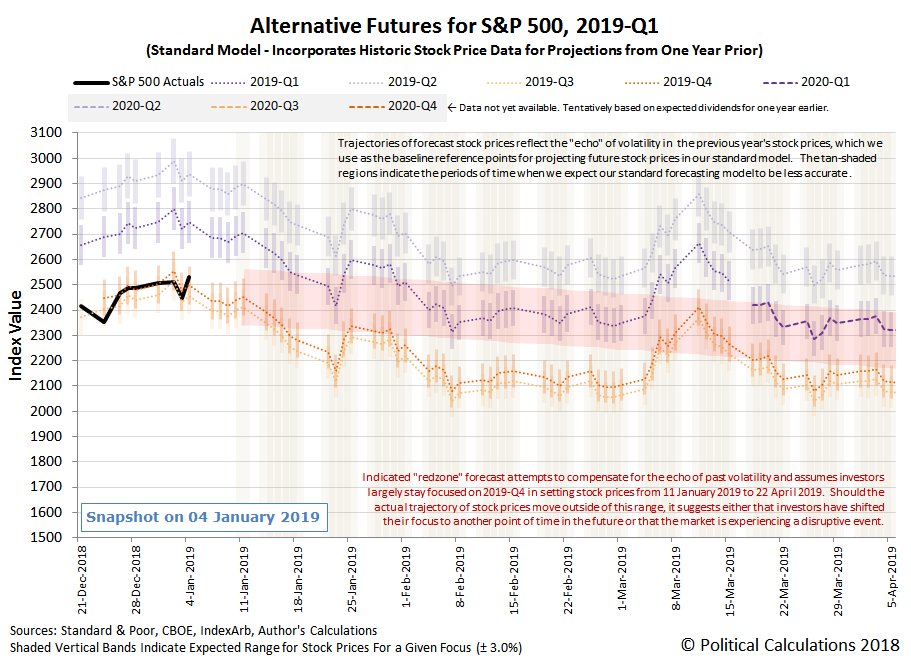 The new quarter is presenting a considerable forecasting challenge in that our model's use of historic stock prices as the base reference points from which it projects the potential alternate futures for the S&P 500 is being impacted by the echo of volatility in stock prices from a year ago. To account for that echo effect on our model's projections, we've added a red-zone forecast to our alternate futures chart, where we have assumed that investors will continue to focus on 2019-Q3 or 2019-Q4 in the period from 11 January 2019 through 22 April 2019. We also anticipate that the market's recently high volatility will continue, where we've drawn the redzone forecast to be slightly wider than the typical plus-or-minus 3% error range that we would expect if investors were closely focused on one particular future point of time.

We're also trying something new in generating the redzone forecast, where rather than simply drawing a red box on the chart, we've incorporated it into the code we use to generate the chart itself, where it may fluctuate in response to changes in stock prices and future expectations until they become relatively locked in. We're looking forward to finding out how well that might work.

Starting with where the S&P 500 closed on 4 January 2019, here's how to read the chart, in order of greater to lesser likelihood:

We've previously covered why investors have fixed their attention on 2019-Q3/2019-Q4 in setting current day stock prices, where we'll simply observe that nothing has yet changed that might prompt them to change that forward-looking focus. If anything, the last two weeks of news from the Federal Reserve has only fixed it at that point more tightly, where Fed officials have indicated that if and when they choose to resume hiking interest rates, it will be during these quarters. Combined with China's worsening economic outlook, which is contributing to the long-anticipated deceleration of U.S. dividend growth in 2019-Q3 and 2019-Q4, these factors account for what seems to be shaping up as a gloomy outlook for S&P 500 investors in the first quarter of 2019.

Over the holidays, Barry Ritholtz presented the positives and negatives for the last week of December 2018 and the first week of January 2019, counting a total of 11 pluses and 11 minuses as the old year ended and the new one began.