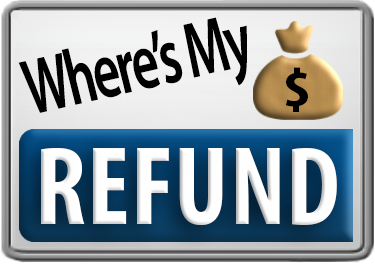 Extra! Extra! Read all about it!

These are actual recent headlines that appeared respectively at Business Insider, the New York Times, and the Honolulu Star Advertiser. All share one common thread - after filing their 2018 income tax returns, a number of financially inattentive Americans, many with access to social media accounts, are expressing how upset they are at getting a smaller refund than they expected, because they somehow never noticed that sneaky Uncle Sam stopped taking quite so much money out of each of their paychecks from mid-February 2018 through December 2018.

How much less of a tax year-end income tax refund are we talking about? We've built a tool to do that math for each indivdual American income tax payer, where we'll approximate how much more of a refund they might have received if the IRS had never changed its withholding tax rates following the 2017 income tax cuts being passed into law. In doing that, we'll assume their employers implemented the change in the withholding tax rates on 14 February 2018, where our tool's results will reflect 10-and-a-half months worth of their paying reduced withholding taxes. [If you're accessing this tool on a site that republishes our RSS news feed, please click through to our site to access a working version of the tool.] 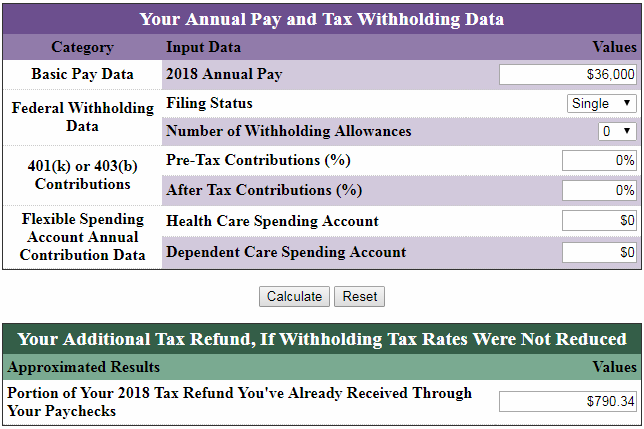 If you've already done your 2018 income taxes, add this number to whatever refund you now know you're going to get (or subtract the amount you have to pay to Uncle Sam from it if that situation applies to you instead), and see how closely that new figure compares to the size of the refund you expected. If your situation isn't too complicated by other factors, the tool's approximation should be pretty close.

We're afraid we cannot do much more than give a ballpark approximation, because there a lot of other variables that we're not taking into account, such as when exactly your employer may have implemented 2018's tax withholding rates, the exact timing of your paychecks, or whether your income changed during the year, to name just three of the factors that can have a big effect on the outcome of the math.

If you play with the numbers in the tool, and you should, you'll also find that the amount of annual income you enter can have a big effect on the results. If you enter $400,000 for example, the amount of Donald Trump's annual salary as President of the United States, you'll find that our tool estimates his additional take home pay for all of 2018 was just $215.03. For President Trump, who has donated virtually all of his Presidential salary after taxes to support various public-interest initiatives at several federal government agencies, that additional amount boosted his donation total for 2018.

By contrast, someone who earned our tool's default entry of $36,000 per year would have taken home an extra $790.34 during 2018, which if the IRS had kept withholding tax rates the same, would have increased their income tax refund for the 2018 tax year by that amount. If that was you, there's the rest of your 2018 tax refund!

Although we've been providing tools for estimating federal withholding taxes since 2005, here are the ones that will matter most to you for your 2018 income taxes and your 2019 paycheck....