Political Calculations
Unexpectedly Intriguing!
25 June 2019
Paper, Plastic, or Cloth: Which Bag Is Better For The Environment? 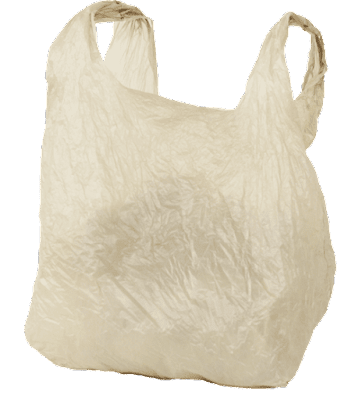 Among environmental activists, plastic bags have a very bad reputation, second only to Starbucks' plastic straws. Made of low-density polyethylene (LDPE), these bags are frequently freely given to customers by grocery stores and other retailers who buy goods in their establishments, which really upsets these political activists, who are calling for them to be banned.

There's just one problem. The plastic carrier bags they hate so much would appear to be much better for the environment than the alternatives these pseudo-environmental activists are pushing to replace them. Much, much better if the reports of a recent study is any indication:

The Danish government recently did a study that took into account environmental impacts beyond simply greenhouse gas emissions, including water use, damage to ecosystems and air pollution. These factors make cloth bags even worse. They estimate you would have to use an organic cotton bag 20,000 times more than a plastic grocery bag to make using it better for the environment.

Those results are summarized in Table IV of the executive summary of the study's results, which compares the relative environmental performance of LDPE carrier bags with their alternatives. We've built the following tool to make parsing the data presented in the table much easier for consumers who really care about the environment to make more informed choices when choosing how they might carry away their purchases whenever they shop. If you're accessing this tool on a site that republishes our RSS news feed, please click through to our site to access a working version of the tool.

Your goal in using the tool is to find a carrier bag option that returns a value of less than one, which would mean that it is better for the environment than a simple LDPE carrier bag when reused just once (most often to contain waste). If you get a value that is greater than one, that's the minimum number of times you would have to reuse your selected option in order for it to become a better option for the environment than using simple LDPE carrier bags.

That raises the question of whether the alternative bag options you've selected might last long enough to beat the LDPE carrier bag. In the case of a simple, unbleached paper bag, for example, the Danish study indicates it would take 43 reuses for it to improve upon the environmental impact of an LDPE carrier bag that is reused just once, which is unlikely since these bags are prone to tearing and other kinds of damage from handling that limit their effective lifespan when they are reused.

One factor not taken into account in the Danish life cycle assessment of LDPE carrier bags and their alternatives is the environmental impact of littering, which is considered to be a negligible issue in the country since Denmark has developed effective sanitation, litter control, and waste disposal technologies and services.

Perhaps if plastic bag-banning advocates cared more about the environment, they would be similarly effective if they put more personal effort and their own resources into developing those technologies in the regions that are the major contributors to human-created plastic waste in the environment.